The State Government of Osun has been named among five other states to benefit from Federal Government third quarter soil erosion control accelerated intervention projects amounting to N5, 567, 314, 541.76. The fund which was approved by Federal Executive Council (FEC) presided over by President Muhammadu Buhari has Kano, Sokoto, Ondo, Enugu and Bayelsa as…”
Editor
News Osun 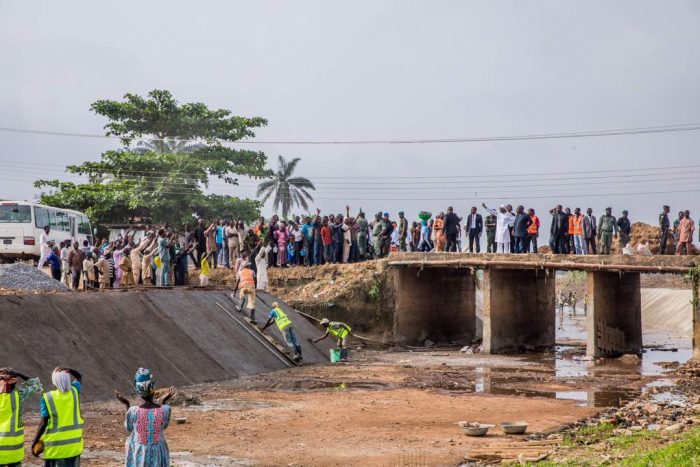 The State Government of Osun has been named among five other states to benefit from Federal Government third quarter soil erosion control accelerated intervention projects amounting to N5, 567, 314, 541.76.

The fund which was approved by Federal Executive Council (FEC) presided over by President Muhammadu Buhari has Kano, Sokoto, Ondo, Enugu and Bayelsa as beneficiaries.

Special Adviser to the President on Media and Publicity, Mr.  Femi Adesina, disclosed this at the post-FEC briefing in company with the Minister of Agriculture and Rural Development, Chief Audu Ogbeh and Minister of State (Aviation), Heidi Sirika.

Osun under governor Aregbesola has been able to control erosion challenge in the state through channelization of waterways and sensitization of public, a situation that has curbed perennial flood as witnessed in other states.

Erosion has been a problem that has been threatening the existence of many states. Not only has erosion destroyed the farmlands, erosion has also destroyed a number of roads and even killed a number people but Osun has not recorded any of such.

Also speaking, Sirika said FEC approved bilateral air services agreement with Canada as part of efforts to boost relations between both countries, including trade and commerce.

“It would be a standard agreement to facilitate the movement of people and business transactions,” he said

He said the research was at the cost of N165 million for 30 tons of foundation seeds multiplied by 265 tons of improved seeds, which is to be given to seeds companies to multiply.

The minister said one of the problems facing maize production in the country was lack of the right quality.

According to him, this is responsible for the yields per hectare being among the lowest in the world.

Ogbe said the council also discussed the disturbing trend of smuggling, which is impacting negatively on the country.

“We have to deal with that because while we are making a great deal of progress in our production of grains, smugglers are trying to compromise the successes we have achieved.

“I can give you some figures. Between September 2015 and now, rice importation through the ports dropped from 644,131 tons to 20,000 tons in September, which means that by the end of this year, to the early part of next year, we can literally say we are close to total self-sufficiency in rice. On the other hand, in Republic of Benin, rice importation has increased to 1.33 million tons because they don’t eat parboiled rice; they eat white rice. So, every grain of rice landing there is heading for Nigeria through smuggling and some of it also come in through Niger Republic. These are issues to deal with because we want local rice production to meet our needs and we are creating jobs.