By Kehinde Ayantunji The Nigeria Society of Engineers, Osogbo Branch has urged the members of the society who are public servant or political appointees to always adhere to standard specification and ensure quality implementation of projects in wherever they are superintending. Chairman, NSE Osogbo branch, Eng Haqib Zubar said this in Osogbo during the recent…”
Yusuf
Osun 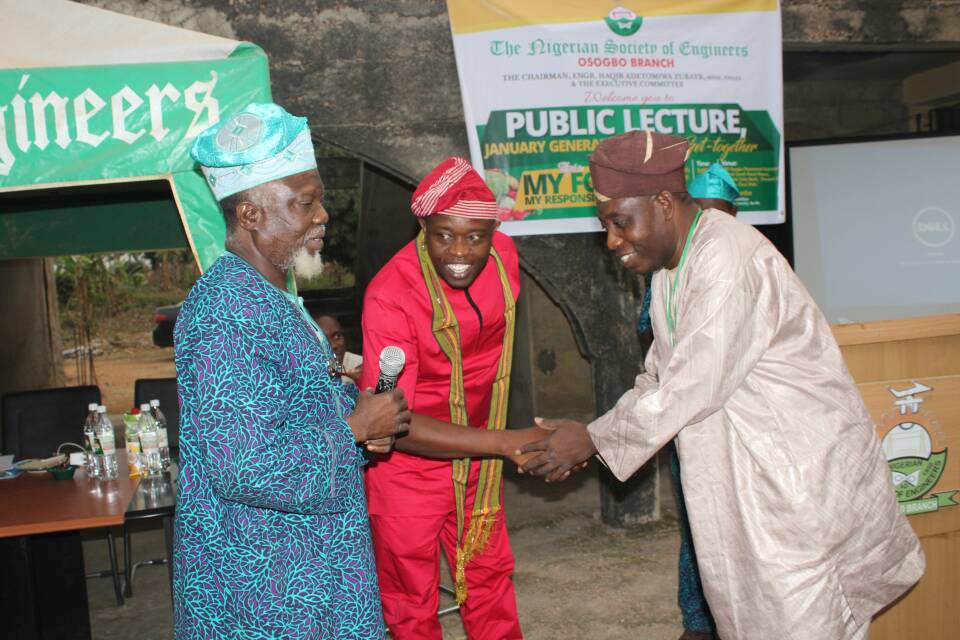 The Nigeria Society of Engineers, Osogbo Branch has urged the members of the society who are public servant or political appointees to always adhere to standard specification and ensure quality implementation of projects in wherever they are superintending.

Chairman, NSE Osogbo branch, Eng Haqib Zubar said this in Osogbo during the recent General Meeting of the society and reception organized in honuor of the members of the society appointed to the state cabinet by Governor Rauf Aregbesola.

According to Eng Zubar, the loyalty of a professional engineer is not primarily to his political principal but to the safety of the society and delivery of quality facilities that will make life more abundant for the people.

He said the engineering profession is about public trust as a result of the expert knowledge to determine what is good and hazardous for the society and urged the political appointees to resist all forms of political and monetary pressure to compromise standard in the discharge of their duties.

Zubar said quality project delivery by any government is largely determined by the professional engineers who are policy makers in such government and urged them to be NSE professional ambassadors.

Speaking during the reception, The Commissioner for Works Engr. Kazeem Salami appreciated NSE for their support since the inception of the present administration in the state especially in the area of quality assurance.

He said Osun is lucky with Governor Rauf Aregbesola who married “political will with professional capacity” in providing global standard infrastructures in the state saying the governor always aspire for the best no matter the cost implication.

He said “the vision of this administration is clear on infrastructural development, Aregbesola is to provide the best road, schools, bridges, and sophisticated technology that can compete with the best in any part of the world”.

“The governor’s vision is evident with the quality of roads that can last for 30 years we are constructing, the state of art school buildings with modern facilities that are of global standard, and that is where we have the acronyms Osun Standard.” because the governor will challenge you to go to any length to get the best, the standard of Mr governor is the best”.

Also speaking, Eng Oluremi Omowaiye challenged Nigeria engineers to invest and embark on research that will provide local made technology to address cattle rustling and farmers crisis in Nigeria.

Omowaiye said the technology has provided solution to such problems in developed countries saying Nigeria engineers must provide direction in addressing the problem through technology that will be peculiar to our environment and weather.

He described the crisis as a reflection of underdevelopment in Nigeria saying “In 2018, if we could not develop technology that we allow cattle rustlers to do their business without affecting the farming and food production, there is a fundamental problem which we must all rise to address” Omowaiye said.

Earlier, Dr Ogunba Olubumi has earlier delivered a lecture on “My Food My Responsibility” where he advised members of the people to be wary of what they consume saying food consumption is responsible for the most of the life threatened diseases.

Aregbesola Would Have Been A Fantastic Administrator, But … – Adejare Bello