Osinbajo Bans Touting at all Ports, Apapa Port to Run 24/7

Acting President Yemi Osinbajo, SAN, has directed the resumption of 24-hour operations at the Apapa Port and outrightly banned touting by officials or unofficial persons at any port; be it air, land and sea ports in Nigeria. Prof. Osinbajo had on Thursday signed three Executive Orders dealing with the business environment, local content in public…”
Editor
Economy featured News 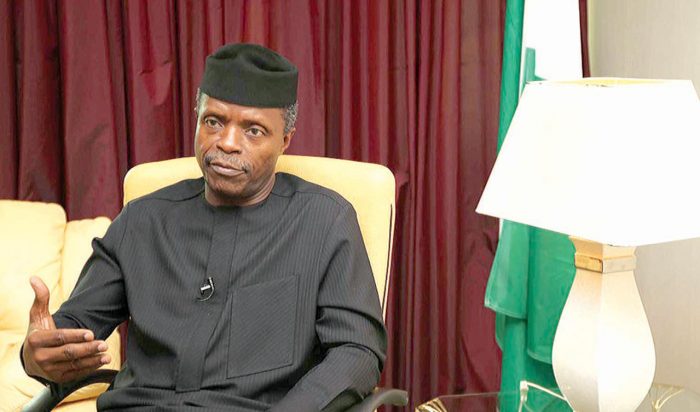 Acting President Yemi Osinbajo, SAN, has directed the resumption of 24-hour operations at the Apapa Port and outrightly banned touting by officials or unofficial persons at any port; be it air, land and sea ports in Nigeria.

The Acting President said in the Order that, “the Apapa Port shall resume 24-hour operations within 30 days of the issuance of this Order and there shall be no touting whatsoever by official or unofficial persons at any port in Nigeria.’’

According to the directive on port operations, “on duty staff shall be properly identified by uniform and official cards while off duty staff shall stay away from the ports except with the express approval of the agency head. The FAAN Aviation Security (AVSEC) and Nigeria Ports Authority (NPA) Security shall enforce this order.’’

To vigorously address the menace of touting at the ports, the Order expressly stipulates that “all non-official staff shall be removed from the secured areas of airports. No official of FAAN, Immigration, security agency or Ministry of Foreign Affairs (MoFA) or any other agency is to meet any non-designated dignitary at any secure areas of the airport.’’

The Acting President also directed that the official approved list of dignitaries that have been pre-approved to be received by protocol officers shall be made available to AVSEC and other relevant agencies ahead of their arrival at the airport.

According to the Order, “any official caught soliciting or receiving bribes from passengers or other port users shall be subject to immediate removal from post and disciplinary as well as criminal proceedings in line with extant laws and regulations.’’

“All relevant MDAs at the airports shall within 30 days of the issuance of this Order merge their respective departure and arrival interfaces into a single customer interface, without prejudice to necessary backend procedures,’’ the Acting President directed.

On the harmonization of activities of agencies operating at the ports, Prof. Osinbajo ordered that “all agencies currently physically present in Nigerian Ports shall within 60 days harmonise their operations into one single interface station domiciled in one location in the port and implemented by a single joint task force at all times, without prejudice to necessary backend procedures.’’

The new single interface station at each Port, the Order stipulates, “shall capture, track and record information on all goods arriving and departing from Nigeria and remit captured information to the head of the MDA and the head of the National Bureau of Statistics on a weekly basis.’’

In addition, the Acting President, through the Executive Order, has directed each Port in Nigeria “to assign an existing export terminal to be dedicated to the exportation of agriculture produce within 30 days of the issuance Order.’’