Falilat Ogunkoya Atlanta ’96 Olympics bronze medallist has blamed Nigeria’s poor performance at the just concluded IAAF World Athletics Championship in London on coaches. The Nigerian team failed to win a medal in London and Ogunkoya, a 400m gold medalist at Jo’burg ’99 All Africa Games, believes the athletes were poorly managed by the coaches….”
Yusuf
Sports 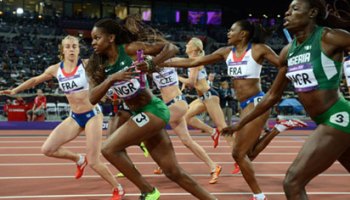 The Nigerian team failed to win a medal in London and Ogunkoya, a 400m gold medalist at Jo’burg ’99 All Africa Games, believes the athletes were poorly managed by the coaches.

Speaking yesterday in Lagos, Ogunkoya, whose personal best and African record of 49.10 seconds at Atlanta ’96 Olympics remains the twelfth fastest of all time, said that Nigeria could have grabbed at least a bronze medal in London but the coaches ‘messed up’ the opportunity.

In particular, Ogunkoya was unhappy with the manner the coaches ‘bungled’ Team Nigeria’s chances in the final of the women’s 4x400m relay on Sunday.

“When the girls qualified for final in the 4x400m relay, I told some few friends around me that Nigeria will surely win a medal in the final. I never knew that the coaches would come up with a formation that will scuttle the whole plan,” Ogunkoya stated.

In the semifinals, Nigeria’s 4x400m women’s team made up of Patience Okon George, Onome Nathaniel, Emerald Egwim and Yinka Ajayi ran a fantastic race with 3.25.40 seconds, a season’s best for the quartet, to emerge second behind winners, Jamaica (3:23:64) in Heat 2.

As at the time of the semifinal, one of Nigeria’s athletes for the championship, Abike Egbeniyi was still battling with visa problems back home. She joined the team a few hours to the final.

The anticipation in many quarters before the final race on Sunday was that the team should be able to pick a medal of any colour for Nigeria if the athletes could add a little bite to their performance in the semi.

“In the first place, I don’t know the reason why the coaches decided to drop one of the athletes for Abike who just arrived the camp few hours to the final race,” Ogunkoya fumed. “Again, I don’t know the rationale behind the decision to allow Patience Okon George to start the race. She was the most experienced among the athletes, and an experienced coach should have prepared Okon George for the anchor leg.”

The Nigerians posted 3.26.72 seconds to place fifth in the final, a performance Ogunkoya said was far below expectation. “After one of the Jamaican athletes suffered a misfortune in the final, the medal was there for Nigeria to pick, if only an experienced athlete like Okon George was running the anchor leg. I felt so disappointed, not with the athletes but the coaches. You can see that the time our girls ran in the semifinal was good enough to fetch Nigeria a medal in the championship.”