Ogunkanmi: Moving Forward A Year After

By Fatai Akanji There is no doubting the fact that the progress of any nation rests solely on the leadership its possesses. At every level, the effect of leadership be it good or bad is felt by the mass of the people. Democracy as a model of government espouses government as an institution created by…”
Yusuf
featured Op-Ed 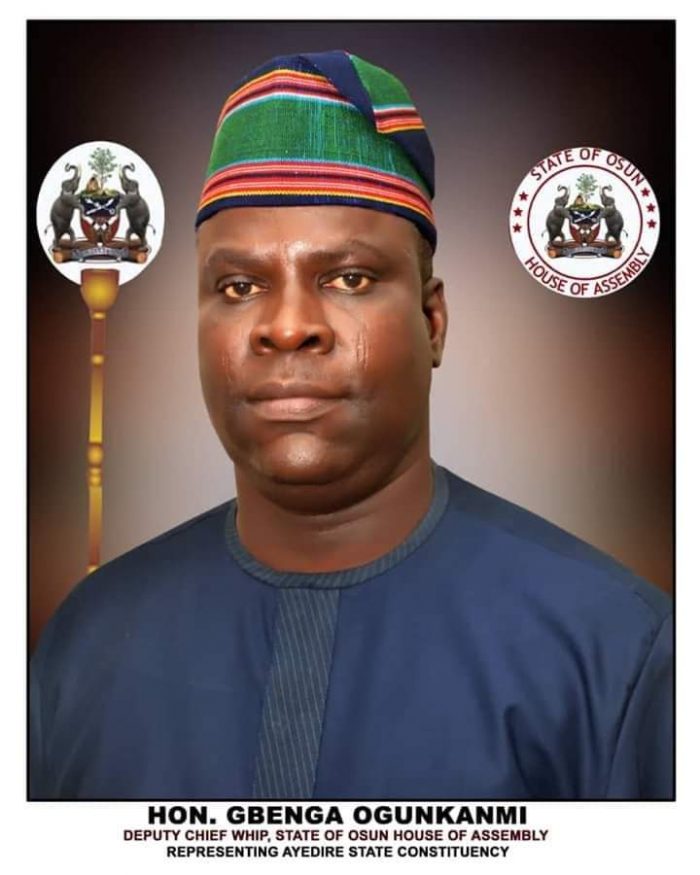 There is no doubting the fact that the progress of any nation rests solely on the leadership its possesses. At every level, the effect of leadership be it good or bad is felt by the mass of the people.

The legislature is a pool of elected representatives from different parts of society to make laws in a bid to achieve good governance in that particular entity. As representatives chosen the people, these set of leaders called lawmakers contribute their quota to the growth of the society with laws hinged on development and purpose driven commitment to directing the cause of social justice and emancipation.

Elected to represent the good people of Ayedire state constituency in the 7th State of Osun House of Assembly constituted a year ago, Hon Abidemi Gbenga Ogunkanmi has in his capacity delivered on his mandate of seeking the purpose of his people’s growth through joint efforts with his colleagues.

Ogunkanmi’s emergence as the Deputy Chief Whip of the parliament despite being a first timer in the house was undoubtedly remarkable. The position reserved for committed party men to ensure that legislators support the position of the party and government in its bid to provide good governance to the citizenry is a testament to his ability to rally efforts of progress and development for the people he represents.

The thorough-bred Ile-Ogbo born politician has proved his mettle and political sagacity in every assignment given him.

He has also ensured that the Whip department does not leave any stone unturned in its responsiblity of administering the system that ensures that members of the party attend and vote in Parliament as the party leadership desires.

Since assuming office on the 9th of June, 2019 and his eventual emergence as the Deputy Chief Whip of the 7th Osun Assembly, Ogunkanmi has remained focused, determined and goal getting to ensure that his official duties, keeping the interest of his constituents dear to heart as well as working for the continuous success of the All Progressives Congress APC at home and in the larger spectrum; Osun West Senatorial District.

Abidemi Gbenga Ogunkanmi, the member representing Ayedire Constituency in the State of Osun House of Assembly is charting the cause of pragmatic, people oriented, purpose driven, selfless commitment to the development of humanity and prosperity of the community which he serves, putting the state in the larger perspective. Ogunkanmi on the floor of the House.

He is also the Chairman, House Committee on Public Accounts which examines accounts showing the appropriation of the sums granted to meet the public expenditure as outlined by the executive.

Hon. Gbenga Ogunkanmi’s leadership a year in office has achieved three things for his people. These three things are the Personal and Collective Development of his people, Purpose-Driven Commitment and Excellence in Service Delivery.

To have an interface with the people that brought him to power, one of the things he did in his early days at the state legislature was to open a consistuency office employing a manager as well as a secretary receiving remuneration.

So far, the lawmaker has been able to attract to his people, numerous and far reaching projects as well as initiatives to better the lives of his constituents with his romance with Universal Basic Education Board, which has led to the distribution of learning tools to some schools in Ayedire.

Hon Ogunkanmi has used his office to influence the distribution of textbooks a project sponsored by UBEC to some schools in AYEDIRE LG.

He also gave out 20 entrance forms to willing students into Technical college Iwo, with all fees paid for the completion of their three-year-study.

It should be noted that the 3 years scholarship for 20 students of Technical college, Iwo will gulp more than a million naira, but nothing is much for a leader who values education, and is ready to spend what it takes to secure quality education for the good people of his consistuency.

It should be noted that ALL that has been done are from HIS SALARY as a State Lawmaker who has never received CONSISTUENCY ALLOWANCE.

Despite this, Ogunkanmi since his days as a private sector person to a council Chairman has remained a trailblazer, Leader per Excellence and a committed progressive to the core.

Indeed, the people of Ayedire should expect more from the pathfinder and dogged goal getter who has so far distinguished himself in service to his people.

No, Baba Atiku, You Must Come To The United States By Churchill Okonkwo

Beyonce Brings Out Osun To The Fore Front At Grammys (Photos)