Ismaeel Uthman THE candidate of Accord Party in the July 16 governorship election in the State of Osun, Dr Akin Ogunbiyi, has returned to his former party, the Peoples Democratic Party (PDP).  But his return has stirred a fresh brawl in the PDP.  Ogunbiyi announced his return to the party in a letter directed…”
Yusuf
featured Osun Politics 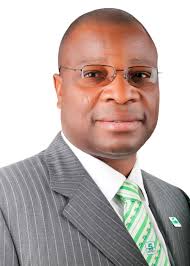 THE candidate of Accord Party in the July 16 governorship election in the State of Osun, Dr Akin Ogunbiyi, has returned to his former party, the Peoples Democratic Party (PDP).

But his return has stirred a fresh brawl in the PDP.

Ogunbiyi announced his return to the party in a letter directed to the National Chairman of the PDP, Sen. Iyorchia Ayu.

A copy of the letter which was sighted by OSUN DEFENDER on Tuesday reads: “I write to notify you of my return to the Peoples Democratic Party.

“My come back after brief absence is to continue my contribution to the development of the party as I have always done in the past. Consequently, I hereby request for the restoration of all my rights and privileges as a member.”

Ogunbiyi has been appointed as member of the Campaign Council of the presidential candidate of the PDP, Alhaji Atiku Abubakar.

The business tycoon left the PDP few weeks to the governorship primary of the PDP on the ground that the National Secretariat of the party, was bias and had already concluded on fielding Sen. Ademola Adeleke as the candidate of the party for the July 16 gubernatorial poll.

His return to the party and subsequent appointment into the campaign council has been generating ripples in the PDP.

Some members of the party has rejected his appointment into the campaign council, describing it as undeserved and a reward for disloyalty.

Opposition to Ogunbiyi’s return and appointment started from his own Ward 05, Ileogbo, Ayedire Local Government.

According to Muftau in the letter sighted by this medium yesterday, Ogunbiyi has never displayed any sense of commitment to the progress of the party, adding that he is more loyal to the All Progressives Congress (APC) than PDP.

The letter reads in part: “We have resolved not to readmit Dr. Ogunbiyi into the PDP as he is a living and present danger to the successes so far recorded by the PDP. His return to the party at this delicate time amounts to planting a mole within the house at a time of war.

“We also want to note that Dr Ogunbiyi’s electoral strength has been tested and found to be unfounded and mere ruse. In the last election, he garnered only 4000 votes for Accord Party as a governorship candidate throughout Osun State. He has nothing, in our own estimation, to contribute positively to the impending victory of our presidential candidate, Alhaji Atiku Abubakar.

“He is therefor a negative influence who must not be given any place of honour, rights and privileges within our great party. We consequently call on leaders of the party at all levels to take note of our position which we took in the best interest of the party and its members at the ward.”

Police in Search of Escaped “Vampire” in Imo

Life Is All That Matters Now