OGBENI TILL DAY-BREAK: My Most Fulfilling Achievements Are The Social Intervention Programmes

Captured in this report are some of the gripping responses of the immediate past Governor of the state of Osun, Ogbeni Rauf Aregbesola from the last Ogbeni Till Daybreak held penultimate week at the WOCDIF Center in Osogbo, state capital. OSUN DEFENDER team was there. West Not Neglected In Our Road Infrastructure Revolution We did…”
Editor
Osun 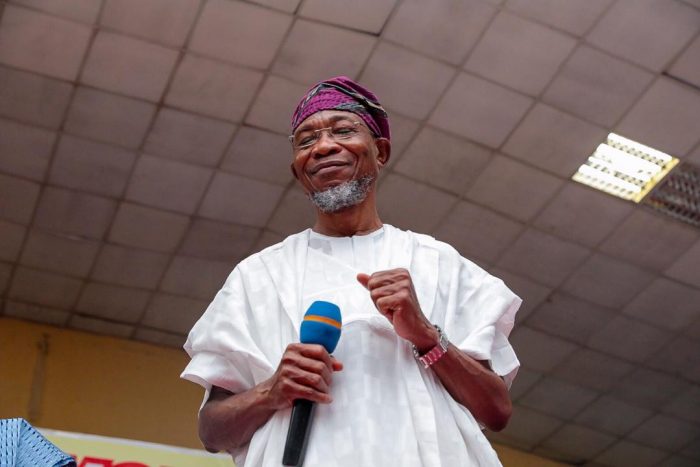 Captured in this report are some of the gripping responses of the immediate past Governor of the state of Osun, Ogbeni Rauf Aregbesola from the last Ogbeni Till Daybreak held penultimate week at the WOCDIF Center in Osogbo, state capital. OSUN DEFENDER team was there.

West Not Neglected In Our Road Infrastructure Revolution

We did 20 roads totaling 21.6kilometers in Iwo local government, although we have not done everything but I make bold to say that there has been no administration since the creation of the state that has embarked on massive road construction in Iwo like we have done. In Ede, we constructed 14 roads totaling 21.4 kilometers, but what residents of the town have been complaining about is that the main road is derelict which the incoming Governor, Gboyega Oyetola will address because he knows how far we have gone and our plans for the main road. In Ejigbo we have constructed 10 roads totaling 11.4 kilometers township roads. At Ikire, we did 3 roads totaling 4.3 kilometers, in Gbogan 3 roads were constructed. Work is still ongoing on the road that links Gbongan to Ajegunle along Ijebu Igbo which is out of the one we have constructed within the town.

If we are to sum these up, it means in Iwo federal constituency, we constructed 59.35 kilometers, in Irewole/Isokan/Ayedaade we constructed 6.42 kilometers roads in all. These are different from the roads constructed by the local government which on the average, we did 7 kilometers each. If you sum up everything, you will know we have done quite a lot of roads but because we met a lot of unconstructed roads and still have a lot to be done, that is why it seems we have not done much. We should all pray that God should give the next governor the ability to construct good roads like he did to us. I am very sure that he will perform better than what we have done. I am confidence that Oyetola will embark on massive road construction, even the ones you never imagine just like it happened during our time. Did anyone ever think we could have a ring road in Osun? We should not deceive ourselves, none thought it could happen and that is why we are called the Way Maker. What people just have to do to allow the government achieve its dream is for you to ensure prompt payment of your tax. Without this, government will not have enough funds to work with.

I have said it time without numbers that laziness is Nigeria’s problem, as corruption has a little percentage because what causes corruption is laziness. A lazy person will see a job and turn it down but wants to live large. If anyone in the range of tax payment get themselves productively engaged, they will perform their duties to the government and if we refuse to do otherwise, poverty will never vanish in our country. I am imploring us that all adult that are able must find one engagement or the other to earn a living, it is immoral for any adult to depend on charity, as charity is meant for the disable and a disable person that can work must do and not beg. It is in that work that the society, community and state generate revenue to run public affairs from security to utility and any such vital thing that will make lives enjoyable and livable.

We Remain Strict In Ensuring The Application Of Rule Of Law

If you can recall, my first broadcast after my swearing on the 27th of November 2010 was to tell our party members and the people of the state that nobody must take laws into their hands, and whoever avenge any of the wrongs perpetrated by some hoodlums under the previous administration would be dealt with according to all laws and regulations in the land. That went a long way to douse unnecessary acrimony and tension in the state and ever since then we have remain very strict in ensuring application of rule of law in the state. The impact is obvious; our state is the most peaceful state in Nigeria.

Our Road Can Be Compared With The Best In The World

To be honest, the Gbongan Akoda road is still under construction and it is totally wrong for anyone to say a road under construction is collapsing because it is not yet completed. All the roads we have completed and commissioned will last for 50 years. The roads we constructed are different from the roads constructed before we came. Whoever is honest will know that the standard of the roads we have constructed can’t be compared to what has been in place in the last 20 years. From the drainage provision, to the road itself after the laterite base, we put cross stone and we put the first layer of asphalt. So, our road can be compared with the best in the world.

I’ll Continue the Same Way If Given another Chance

Ijesa People And Their Preference

What happened in Ijesaland during the last election was democracy which is the government of the people, for the people and by the people. The people must have choice. They demonstrated their own preference, Ijesa people did not vote for us but Osogbo people did. Let add that in that district APC had the highest return of votes.

I Need Rest After My Tenure

Commissioning Not Enough To Measure Performance

There was never a time I said commission of road was a waste, what I recall I said was that you can’t benchmark the achievement of a government by commissioning. There was this hue and cry then that we have not commissioned roads, therefore, we have not performed and we reply by saying let us work on and when we are satisfied with our work we would be presenting them. When we felt it was necessary to commission we did. We have not commissioned one tenth of the works we have done. We don’t celebrate such things but whatever we see as monumental we celebrate it; we have never done frivolous commissioning.

My Most Fulfilling Achievement

My most fulfilling achievement is human capacity development or better put social investment programmes . No matter your investment on physical infrastructure if human beings are not properly affected, you are wasting your time, the best investment is in people. We have changed the perception of our people through the Omoluabi ethos, our people now proudly call themselves Omoluabi, that is more than anything that any government can be proud of. If we can get that properly internalized, accepted and adopted by our people, then we have solved 50% challenges of our race. Besides, we have targeted the up and coming citizens in the state through the school feeding programme which we revived and improved upon as the most important and life transforming programme that any administration can do. What it means is that the mental capacity of our children, their cognitive abilities and their general perception of themselves as proud citizens of Nigeria starting from their state is something that nobody can take away from them. They are also aware that their society and their people care for them. We also began a youth empowerment programme that nobody ever thought was possible which the beneficiaries will remain forever grateful to. There are other social investment programmmes with huge impact on our people. Osun was never part of the state with vibrant economy in the serious sense of it but now the state is the state with the lowest unemployment rate. This is not because of road, school but human development investment. The state also has the least misery index, Osun is the state with the least poverty rate. We did not concoct these indices. How then will you measure the performance of a government when the constitution of the country says the fundamental objective of a state is to ensure the welfare of its people and their security. I thank God for his grace which has made us to impact the lives of

our people; that remains my greatest achievement.

My Description of Gboyega Oyetola

Oyetola is a calm cool and collected person. He is very brilliant, goal getter, objective. Although, he is not mercurial like me, not radical like me and he does not have my swagger. If you must know, the governor is too engaged to be able to do what he must do. The person that does most his works in the executive administration is the chief of staff; simply put the chief of staff is the head of government and so, whatever accolades you want to give to me he deserves three quarter of it. He is a silent achiever, he does not make noise, he does not grandstand, he is not mercurial but he is intelligent.

I Have No Bank Account Anywhere In The World

I don t collect salary. I have not received a dime as a salary since I was sworn in and I don’t intend to take. But the state feeds me, bought, maintains and fuels my car and the state houses me. I don’t even need money as a governor. If I do not receive salary how will I have money? The few money I have from friends and whatever, I refused to touch them, this is what I give people who come to me for help. This is a challenge that anybody is yet to break. Let whoever knows tell the world where my account is anywhere in the world. I have no account anywhere. Since I do not have one, I have no bank I keep my money; I don’t have any money anywhere. That is why I said after my tenure is over, I am going back to my father’s house at Ilesa, the one I built before I became a governor. So there is no money anywhere.

I don’t want to join issues with Olusegun Obasanjo, he is an elder statesman and I am a Yoruba man. Yoruba people have a way to talk to their elders I will not join issues with him but I will make clarification. Nigeria is founded on federalism and some people are so committed that that principled is not toyed with. The federalism of Nigeria for us is sacred and I must say that I am a federalist. A federation is based on two entities, and there can’t be three tiers of government in federalism which consist of the center and the federating units which can either be region or state. The issue of who should control where should not be an issue. Anybody thinking that there would be another subset is daydreaming. It is impossible. The responsibility of the local government remains that of the state, and the house assembly is to make laws for them. This is not about restructuring Nigeria it is about managing effectively what we have in Nigeria. If you talk about siphoning local government money, that is a separate issue that should be tackled in its own way, but not by violating the principle of federalism.

SDP Candidates Will Contest On APC Platform In Osun