Following the ultimatum given to southerners by the Arewa youths, the Southern Leaders Forum has called on Acting President Yemi Osinbajo to, as a matter of urgency, address the nation on measures being taken by the federal government to protect the Igbo and other southerners from attacks by Arewa youths, who weeks ago, gave the…”
Editor
News 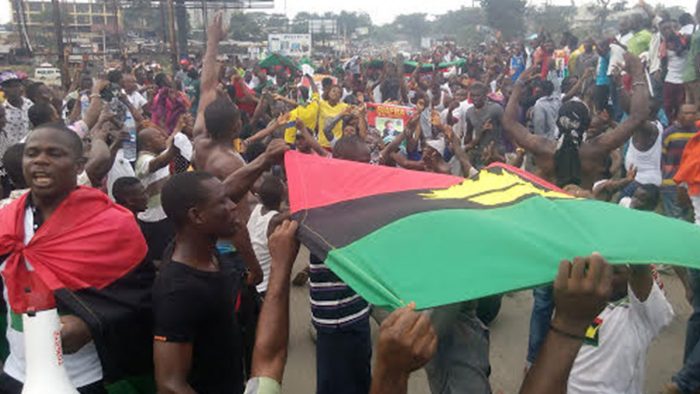 Following the ultimatum given to southerners by the Arewa youths, the Southern Leaders Forum has called on Acting President Yemi Osinbajo to, as a matter of urgency, address the nation on measures being taken by the federal government to protect the Igbo and other southerners from attacks by Arewa youths, who weeks ago, gave the Igbo up to October 1, 2017, to leave the North.

Rising from a meeting held in Lagos at the residence of Chief Albert Korubo Horsfall, the leaders expressed concern that no action appeared to have been taken by the government on the quit order.
They also insisted that the country must be restructured along the 1963 Republican Constitution that gave the federating units a leeway over their affairs.

The leaders also said Nigeria must be restructured by December 2017.
In attendance at the meeting were leaders of thoughts from the South-west, the South-east and the South-south.
A communique read by Senator Bassey Henshaw at the end of the meeting reads: “The leaders noted with gratitude the statement by the Acting President that the issue of restructuring would be addressed soon and urged him to act on the recommendations of the 2014 National Conference.

“The 16-point agenda submitted by the South-south leaders to the president should be acted upon immediately to avoid a resurgence of youth restiveness in the region and sustain the current peace.
“The leaders noted that the issue of restructuring and change was an important part of the All Progressives Congress’ manifesto.

“The meeting also noted with great concern the continued menace of armed Fulani herdsmen in the southern part of Nigeria and the proliferation of Fulani settlement in the south and alert the Nigerian authority and the world at large to this dangerous development and call on the federal government to make an official statement on this and take appropriate action to check it.
“They reiterated and reaffirmed the decision taken at their meeting of June 18 on the unity of Nigeria and the need for restructuring and the solidarity of the entire south.

“The leaders noted with concern that today no action appears to have been taken regarding the October 1, 2017 ultimatum issued by Arewa youths to the Igbos and demand that as a matter of urgency, the acting president addresses Nigerians to inform all about what steps have been taken to ensure that the Igbos and southerners generally will be protected against the threat of attacks by the Arewa youths.
“We reiterate that any threat or action against any section of the South will be treated as a threat or action against the entire South.

“The leaders insist that they would not be distracted and urged all well-meaning Nigerians not to be distracted by individuals who claimed not to understand what restructuring means or try to imply a non-existent sinister plan to break up Nigeria because of the demand for restructuring.
“We affirm our commitment to the unity of Nigeria and also insist on the urgent need to restructure Nigeria to achieve true federalism.

“For the avoidance of doubt, restructuring towards a true federalism means a return to the independence constitution, which our founding father’s bequeathed to us. That constitution allowed the region of that time substantial autonomy in the managing of their affairs.
“The states will be federating units in the new federation with the right to have their own individual constitutions.

“The states will have the power to control the resources located in their areas of jurisdictions and make agreed contribution to the centre for general services.
“We will identify those areas in the constitution which should be devolved to the states to allow for effective administration and control of their affairs.