The Oba of Benin, Omo N’oba N’edo, Uku Akpolokpolo, Ewuare II has urged the Governor of Osun, Ogbeni Rauf Aregbesola, to work with his colleagues in the Nigeria Governors’ Forum on to stop the incessant killings by suspected Fulani herdsmen in the country. The monarch challenged the Presidency to surmount the national security challenges…”
Yusuf
News Osun 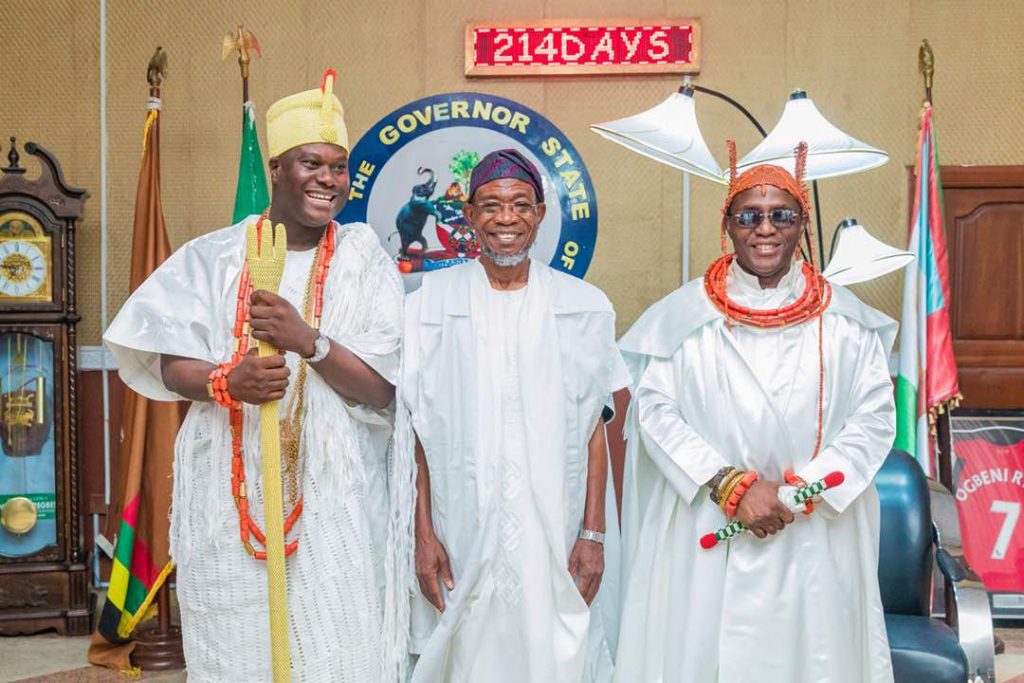 The Oba of Benin, Omo N’oba N’edo, Uku Akpolokpolo, Ewuare II has urged the Governor of Osun, Ogbeni Rauf Aregbesola, to work with his colleagues in the Nigeria Governors’ Forum on to stop the incessant killings by suspected Fulani herdsmen in the country.

The monarch challenged the Presidency to surmount the national security challenges confronting the country by taking the necessary steps that would strengthen security in every part of the country.

Oba of Benin made the call on Saturday during a courtesy visit to Governor Aregbesola at Government House, Osogbo. He said it is necessary to promote peaceful coexistence among Nigerians and as well rescue the country from the shackles of insecurity that has daily become the lot of the citizenry.

The revered monarch lamented the level of insecurity in the country which he said has painted Nigeria in bad light in the comity of nations, hence the need for government at all levels to do the needful to end the menace.

According to him, “I want you to mobilise your colleagues in the Nigerian Governors’ Forum to address the issue of insecurity in the country and do something to stop the unwarranted killings by Fulani herdsmen in Benue, Borno, Adamawa, Yobe, Edo and other parts of the country.

“It is unfortunate that this is going on in our land, we want something to be quickly done as soon as possible so that Nigerians can know peace because people are being swallowed by cattle in the land.

“We even learnt that there might be some international connections to it, we don’t know anything about that, all we want is for it to stop so that our people can know peace again.

“Nigerians cherish their comfort and a peaceful environment so much; so we are charging those of you at the helms of affairs in the country to do everything humanly possible to guarantee peace for Nigerians.

“The bloodletting is too much in the land and the nation is bleeding, we want a stop to this. The killing of innocent citizens has to stop in every part of this country. It is worrisome that the trending news in the country today is killing here and there, no day you will not hear the news that people have been butchered by herdsmen. Mr Governor, something urgent needs to be done about it.

“I want to use this opportunity to implore Nigerians on the need for them to be vigilant and security conscious more than ever before in our society, it is important for us all to know our neighbours for our own safety’, the monarch stressed.

The traditional ruler also condemned in its totality the prevalence of human trafficking in the country particularly in Edo State, describing the menace as modern day slavery that must be urgently confronted.

Oba Ewuare II said it is time for Nigerian government to be on top of its responsibilities, emphasizing that all hands must be on deck to put a stop to the ugly trend.

Describing human trafficking as crime against fellow human beings, the traditional ruler admonished Nigerians not to see it as an Edo State problem but a national challenge which everybody must rise against for the good of the nation.

Oba Ewuare II commended the British government and other members of the international community for being sensitive to Nigeria’s plights, saying ‎their impacts at recognizing the efforts of the royal stool in a bid to put an end to the scourge had yielded positive results.

The monarch called on Nigerians to ‎support the campaign against corruption in the country, noting that for a nation to grow, her citizen must detest any form of corrupt practices.

According the Oba, “The modern slavery in our land today is that of human trafficking and unfortunately many people see it as an Edo State problem, but I tell you it is far from it. We all need to come together and fight this menace that is staring us in the face or else we will all suffer for it.

“On our part we are doing all that is humanly possible to put an end to human trafficking in our land because it is a crime against a fellow human being, other parts of the country don’t need to stigmatize Edo State, we need to see it as a national issue.

“It now a national and international issue and I am happy to inform you that the British government has recognized our effort in trying to curb the menace and it is gratifying to note that the Ife and Benin kingdoms have agreed to work together on solving the problem”, he added.

In his remarks, the Governor of Osun, Ogbeni Rauf Aregbesola, disclosed that efforts are in top gear to eliminate all forms of insecurity in the country,

He described the spate of gruesome killings in some parts of the country as criminal and an act of lawlessness which is beyond the issue of farmers, herdsmen clash alone.

Arebesola held that the issue of Fulani/herdsmen killings have been extensively discussed at the last National Executive Council meeting held in Abuja, assured Nigerians that the unfortunate killings by the Fulani herdsmen will soon be a thing of the past.

He said the killings became worrisome for the government to the extent that last National Executive Council meeting was devoted to the discussion on how to tackle the menace, stressing that an end to the lawlessness is already in sight.

The governor who assured Nigerians that government is not folding its arms on threat to national security, charged Nigerians to always go about their lawful duties without fear as the government at the centre is doing everything possible to ensure that Nigeria continues to be peaceful.

“I want to assure that government is not folding its arms as to the security situation in the country, we are pained about what is going on and I want you to know that the last National Executive Council meeting was devoted to discussing a way out of the current security challenge in the country.

“The act is criminal and lawless and we condemn it entirety. I want us to begin to see it beyond just farmers and Fulani herdsmen clash but a monster that shouldn’t be allowed to grow.

“The cheering news is that I want Nigerians to know that we will be over this crisis in the next few weeks by God’s grace”. Aregbesola stated.

Aregbesola also assured the visiting monarch that all efforts will be put in place to mobilize the state’s traditional institution on the need to champion the campaign to completely eradicate human trafficking in Nigeria.

He therefore described the visit as the re-enactment of Yoruba heritage.

Earlier, the Ooni of Ife, Oba Adeyeye Enitan Ogunwusi expressed delight on the visit of Oba Ewuare II, saying it is an affirmation to the fact that Yoruba people remain united.

Oba Ogunwusi said the visit has demonstrated the huge love, unity and cohesion between the people of Benin and the whole Yoruba speaking States in Nigeria.

He called on Yoruba people to continue to love one another and always uphold the culture, heritage and values that the race is known for.

“Today, it is evident that we have made another history‎ by our common ancestry and cultural heritage through this visit.

“It shows that Yorubas are one and united, irrespective of place and location because there is no joy as joy of one’s origin, which we have felt through this visit”, Ooni stated

Air Peace CEO, Onyema Fingered In $20m Fraud In US