It’s the last round of action before the Christmas and New Year Holiday and another busy Wednesday for women football lovers in Nigeria. Early pacesetters Bayelsa Queens and FC Robo Queens will go head-to-head in week 3, with one or both dropping points from their earlier two wins. Edo Queens will host Rivers Angels…”
Yusuf
Tits Bits 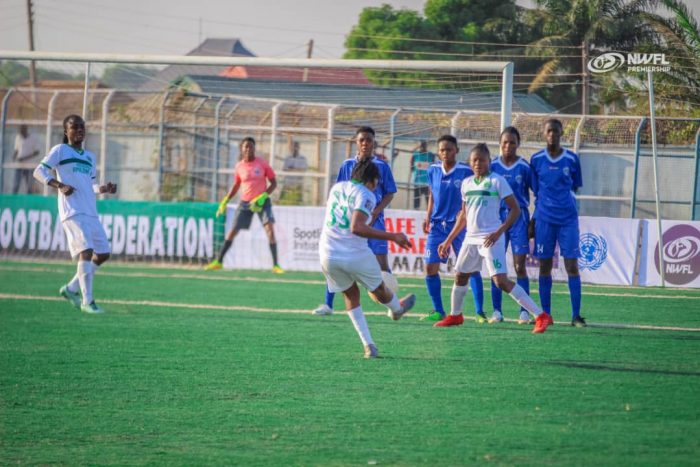 It’s the last round of action before the Christmas and New Year Holiday and another busy Wednesday for women football lovers in Nigeria.

Early pacesetters Bayelsa Queens and FC Robo Queens will go head-to-head in week 3, with one or both dropping points from their earlier two wins.

Edo Queens will host Rivers Angels at the Samuel Ogbemudia Stadium, Benin, in what promises to be one of the biggest games of the third week.

Nasarawa Amazons will be hoping to get back to winning ways after two home defeats when they face Confluence Queens in Lokoja, Whyte Ogbonda will be looking at compounding the woes of the ‘Solid Babes’ when they meet on Wednesday.

Osun Babes will host Pelican Stars at the Osogbo City Stadium, in what is their first home game of the season, while Sunshine Queens travel to Agbor to face Delta Queens.

In pursuit of their first league victory under new Manager, Anya Ugochi, Dreamstar Ladies will battle with Abia Angels in Umuahia, while Ibom Angels welcome Warri side Royal Queens to the Godswill Akpabio Stadium, Uyo.

Bayelsa Queens welcomes FC Robo Queens to the Samson Siasia Stadium, Yenagoa on Wednesday evening, in what promises to be a great encounter. Both teams have been excellent of late with back-to-back wins and both teams recorded victory in Lafia against Nasarawa Amazons.

The ‘Restoration Ladies’ are very strong at home and this will be another great test for them, after a hard-fought 2-1 victory against Sunshine Sunshine Queens on matchday one.

Monday Gift, Taiwo Lawal, Rukayat Shobowale are the players Osahon Emmanuel will be counting on, while Moses Aduku will be hoping to see the best of Joy Jerry, Anjor Mary, Vincent Precious and the rest on Wednesday.

Confluence Queens will lock horns with Nasarawa Amazons at the Confluence Stadium, Lokoja. The ‘Solid Babes’ were beaten at home last Wednesday, for the second time this season.

They have conceded three goals at home and only managed to score once. Confluence Queens have only one point so far this season and will be hoping to add to their point against Nasarawa Amazons. They have also conceded three and only scored once.

Adejoke Ejalonibu, Amarachi Okronkwo, Chiemere Opara are players Nasarawa Amazons will be counting on, while Confluence Queens trio of Joy Omewa, Adoo Yina, Glory Edet and others will be aiming to compound the woes of their opponent. Delta Queens have conceded more goals than any team in the league this season. For them, they have scored 6 goals and conceded 7, meanwhile their opponent on wednesday have conceded twice and scored three times.

The home team had an horrendous game lastweek against Rivers Angels and would be hoping they can redeem themselves infront of their home fans. High flying Dominance Odunbajo and Seun Fakunle of Sunshine Queens have been talking tough ahead of this encounter.

This is a South-south derby. Two of the biggest clubsides in the country meets at the Samuel Ogbemudia Stadium, Benin on wednesday evening. Both haven’t lost this season, Edo Queens have scored five goals and conceded just once, while highscoring side, Rivers Angels have scored 7 and conceded just three. Edo Queens will be eager to build on their away victory over Dreamstar Ladies in Lagos, while Rivers Angels will want to continue from where they stopped last Wednesday.

Abia Angels will be playing against a more confident DreamStar Ladies side, as stated by Club Chairman, Abdulrahman Abolore.

The ‘Galaticas’ have lost their two opening games and have been disappointing infront of goal, scoring just once in their last two encounters. Abia Angels lost narrowly to Royal Queens on Wednesday and will be counting on a victory against Dreamstar Ladies on matchday three.

League football will be returning to the Osogbo City Stadium, for the first time in almost a year and the ‘Omoluabi Queens’ will go into this encounter with the hope of adding to the three point garnered in Uyo on matchday one.

Pelican Stars knows that they have to start picking points early in the league, as they have been able to get only a point in two matches. Edat Egan and his ladies will be aiming to silent the Osogbo fans with a favourable result. The two teams have full squad of players to pick from. It’s promises to be an interesting encounter.

Ibom Angels will be keen to put their poor start behind them and face a tough challenge against the young girls from Warri.

The ‘Canadian Geese’ have proven they can win games after their hard-fought 1-0 victory over Abia Angels last week. They have 3 points while their opponent on Wednesday have only a point, which makes it neccesary for the Moruf Adeyemo side to want valuable points against Royal Queens.