Nigeria Women top-tier football league is back and a thrilling match-day one has left fans with plenty of talking points, with FC Robo travelling down to Lafia to defeat heavyweight Nasarawa Amazons and Osun Babes winning Ibom Angels in Uyo. Elsewhere there were impressive victories for new-look Delta Queens and Edo Queens. Bayelsa Queens…”
Yusuf
Sports 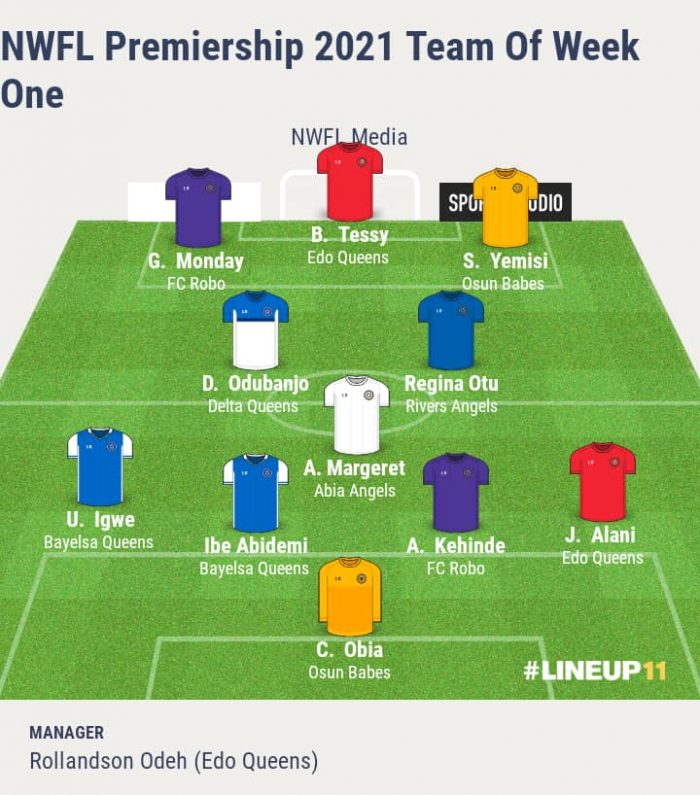 Nigeria Women top-tier football league is back and a thrilling match-day one has left fans with plenty of talking points, with FC Robo travelling down to Lafia to defeat heavyweight Nasarawa Amazons and Osun Babes winning Ibom Angels in Uyo.

Elsewhere there were impressive victories for new-look Delta Queens and Edo Queens. Bayelsa Queens also got a victory past Sunshine Queens and lot more other results.

For the first time this season, we have compiled our best XI for week one.

Osun Babes began the new season with an away victory courtesy of a solid display at the back against Ibom Angels in Uyo.

Key to their success in Uyo was the superlative performance of goalkeeper Christiana Obia, who produced a commanding display, including a brilliant stop to deny Edewor Precious from close range.

Alani Jumoke earns her inclusion in our side at right-back following a wonderful display against Royal Queens. The versatile defender was full of energy running down the flank from her right full back position. She was instrumental to her teams victory on Wednesday.

Uzoamaka Igwe kept her preseason form down to the first week of the season, when her team won a strong Sunshine Queens at the Samson Siasia Stadium on Wednesday. Her dangerous delivery ensured Moses Aduku’s side began the new season with a promising performance against the ‘Betty Babes’

Though she plays most times as a centre defender, the former Sunshine Queens defender has an intimidating height that she uses well. Her fantastic free-kick on Wednesday gave Abia Angels the confidence to lead on in the game against Pelican Stars at the Umuahia Township Stadium.

FC Robo made a flying start to the new campaign with a victory over Nasarawa Amazons in Lafia and the former Obilic FC of Serbia defender proved herself as an important marker at both ends of the pitch on wednesday evening, producing a stand-out defensive display and showcasing her threats at the other end at times.

The former Ibom Angels defender gave an outstanding performance in the defence line of Bayelsa Queens, ensuring her back-line was very safe. Though diminutive, the centre-defender has shown alot that size doesn’t really matter in football.

Yemisi Samuel’s debut performance ended Been a fruitful one as she scored the only goal of the match against Ibom Angels to ensure her side won away from home. The Omoluabi Queens created more than five scoring chances in the game, but only converted once. It was indeed a dazzling display by the former Sunshine Queens forward on Wednesday.

The former Jokodolu Babes forward scored twice against Lagos based side Dreamstar Ladies at the Agbor Stadium in Delta. She was the player of the match and truly gave the Galaticas defence line alot of problems all through the game.

The former Nasarawa Amazons forward enjoyed a brilliant match-day under the floodlight at the Samuel Ogbemudia Stadium, Benin. Her brace ensured the Obaseki girls nailed neighbours Royal Queens 4-1 in the opening encounter of the 2021 NWFL Premiership.

Regina Otu arrived Porthacourt from Edo Queens last season and has been impressive for the ‘jewels of Rivers’ since then. Though she plays at an attacking Mid-fielder at times, her energetic and creative presence at the midfield gave Rivers Angels a great balance in the game against Confluence Queens.

The left winger, played mostly from the right side and was a thorn in the flesh of the Nasarawa Amazons defence. The former C.O.D Ladies of Lagos has already been tipped as one of the players to excel this new season.

Mkhitaryan, Aubameyang Vow To Give All For Wenger As Arsenal Host Man City