The  Nigeria Security and Civil Defence Corps (NSCDC) has partnered with the Economic and Financial Crimes Commission (EFCC) on the deployment of forensic investigation to track criminals.   The partnership was established when NSCDC Forensic Unit officers paid a visit to EFCC Headquarters Forensic Laboratory on Tuesday, in Abuja. Mr Tersoo Shaapera, Head of NSCDC…”
Olamide
News Security 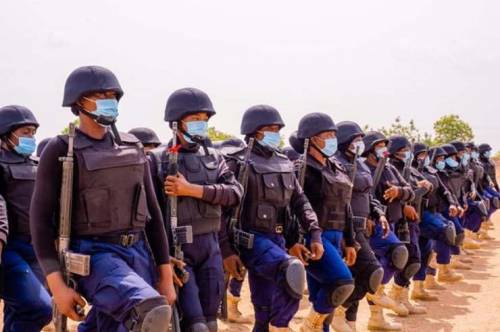 The  Nigeria Security and Civil Defence Corps (NSCDC) has partnered with the Economic and Financial Crimes Commission (EFCC) on the deployment of forensic investigation to track criminals.

The partnership was established when NSCDC Forensic Unit officers paid a visit to EFCC Headquarters Forensic Laboratory on Tuesday, in Abuja.

Mr Tersoo Shaapera, Head of NSCDC Forensic and Psychological Services, said that the visit to the EFCC was imperative being an advanced agency in crimes forensic study and analysis.

Shaapera said that the partnership was to foster capacity building of personnel, and training on criminal cases management, among other areas of speciality.

He described the EFCC’s Forensic Laboratory as one of the best in Africa, adding that “ we know your system is bigger than ours and we know we can profit from the commission.”

“ The Corps is not yet there but we are not where we used to be.

“We are here to create a physical bond so that when there are issues it could be presented to EFCC as we are all government agencies”, he said.

Shaapera said that there was need to collaborate to understand why criminals continuously committed crimes which at times were same in nature.

“It will help us to reduce crime and also know if it is psychologically related,” he said.

Shaapera said that the corps’ Commandant General, Mr Ahmed Audi, saw the need for the establishment of the unit to meet the obligation of crime prevention and response.

“The unit was created to protect the nation’s critical national assets and infrastructure from criminals alongside other reasons,” he said.

The Unit Head, further said that the unit had been able to conduct psychological profiling, investigate motives behind crimes and adopted confidentiality of documents.

The Director represented by EFCC Forensics Head, Mr Gideon Dashong, described forensic analysis as broad, stating that the commission was involved in a large number of aspects.

“We too can benefit in some aspects that we don’t have, but whatever areas you will need our specialty, the Corps should write to the commission for approval,” he said.

Dashong advised the Corps to have pictorial and graphical information of all suspects arrested to enhance operations in the unit.

He said that this would also help in information sharing amongst security agencies which will help in the fight against insecurity and criminality.

He also said that forensics was time consuming and an analyst needed to be analytical to avoid incriminating innocent suspects.

The Forensic Head said that the data gotten from the processing of finger prints help to identify suspects and criminals with multiple identities.

He said that to avoid documents gotten during investigation not to be thrown out of court rooms, it was important to limit compromise and ensure confidentiality.

He said that the Commission adopted the use of chain of custody, evidence collection and evidence submission forms to achieve quality standard of operations.

He also said that knowing how to effectively collect data from phones and computer was important as it served as major exhibit.

Dashong said that when investigating cyber criminals, the commission’s experiences enabled it to match up to the criminals’ tactics.

“ We noticed they are able to work together and trust themselves a lot and have a good cooperation.

“ They work in syndicate than alone and most times they have hidden crimes but we have softwares that we use to keep up.

“Phones password is a bit of a problem but we have tools now to crack these passwords,” he added.

FBI acted for no reason, without proof -Trump