NPFL: Were Duke Udi And John Obuh Right To Be Sacked? By Kunle Fayiga

The biggest stories coming out of the Nigeria Professional Football League in the past week were Duke Udi and John Obuh being relieved of their duties as managers of Sunshine Stars and Kwara United respectively. Things haven’t been going well for the Owena Whales as they lurk close to the relegation zone, while the Harmony…”
Yusuf
Op-Ed Sports 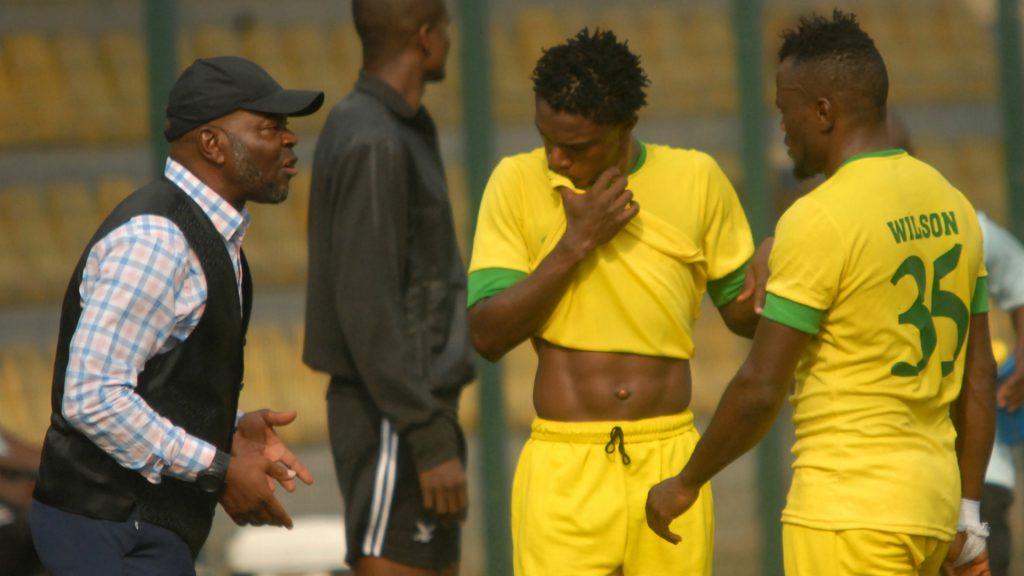 The biggest stories coming out of the Nigeria Professional Football League in the past week were Duke Udi and John Obuh being relieved of their duties as managers of Sunshine Stars and Kwara United respectively. Things haven’t been going well for the Owena Whales as they lurk close to the relegation zone, while the Harmony Warriors are rock bottom of the pile.

It is certainly not where the management of both clubs would have wanted them to be, but do their poor starts to the season ensure that both men deserved to be axed?

Udi came to Akure in the second half of the 2017 NPFL season when they were in relegation trouble – replacing former Super Eagles coach Austin Eguavoen, who had failed to provide any spark.

At the time of Udi’s arrival, Sunshine were banished from their Akure base, for crowd violation, to Ijebu-Ode. It’s not the first time the Ondo State capital club used Ijebu-Ode for their home games but the former Osun United boss proved to be an instant hit as Sunshine garnered some big results both in their temporary home and on the road to ultimately beat the drop. Udi became a fan favourite and appeared to be the man to see out the current campaign. However, all was not well within the Sunshine camp.
Aside from crowd disturbances, the club owed a backlog of salaries to a number of players both past and present.

This put them under the spotlight of the League Management Company, and with players threatening to take strike action over unpaid wages, motivation levels were inevitably low.

There was little the manager could do, and even Udi claimed to have been owed.

The Ondo State Football Agency clarified that Udi was not sacked but rather asked to “step aside for gross insubordination”, due to his refusal to respond to queries and disrespecting constituted authority, for the break down in relationship with players, and for his disregard for the press.

How could a man who saved the club from relegation all of a sudden become the villain?

Certainly, there’s the sense that the Sunshine hierarchy weren’t helping the ex-Nigeria international, and that he has been made a scapegoat to cover up for their poor administration.

Obuh’s axing is rather more unfortunate. He was the architect of Kwara United’s return to the NPFL for the first time since 2015 as the Ilorin-based club finished top of the Nigeria National League Northern Conference.

The NPFL terrain is difficult, and one that any club that wants to survive needs to be well equipped for. However, the former Nigeria U-20 coach did not get the backing of the Kwara United management and ended up working with what he had.

Indeed, the Harmony Warriors have been the worst performers in the NPFL as they have the lowest number of home wins (three) and the most home defeats (two). The Kwara hierarchy gave Obuh a three-game ultimatum, but it was evident that he would get the axe sooner or later.

Admittedly, one can argue that Udi and Obuh were falling short of expectations, but neither were truly given the support required to succeed.

Assuming that Sunshine Stars and Kwara United had bankrolled both managers with the necessary funds and they didn’t succeed, then the blame would be on their heads, but in this case, it’s the management that are culpable for their clubs’ failure.

United have swiftly appointed former Niger Tornadoes boss Abubakar Bala , while Stars have installed Henry Abiodun as caretaker boss. It is yet to be seen if these men will prompt a turnaround fully knowing that they will work in the same unpleasant environment as their predecessors.

What is saddening is that majority aren’t on lucrative contracts and are not treated with the respect they deserve because of the clubs’ management by state governments.

The league is brimming with many excellent coaches, but they need to thrive in conducive environments and get the required support.

Failure to change this mentality and attitude means that talented coaches will not be harnessed to their full potential, which in turn will hurt the growth of a league trying to build a positive image in front of an increasingly disenfranchised local audience.