There are strong indications that northern governors in the All Progressives Congress have withdrawn their support for the elongation of the tenure of the party’s National Working Committee. It was gathered on Saturday that the party’s stakeholders were looking beyond the National Chairman, Chief John Odigie-Oyegun, to lead the party. One of our correspondents gathered…”
Editor
featured News Politics 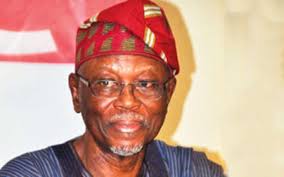 There are strong indications that northern governors in the All Progressives Congress have withdrawn their support for the elongation of the tenure of the party’s National Working Committee.

It was gathered on Saturday that the party’s stakeholders were looking beyond the National Chairman, Chief John Odigie-Oyegun, to lead the party.

One of our correspondents gathered that key supporters of the party’s National Chairman, especially northern governors, had shelved their earlier decision to sink or sail with the chairman.

A highly-placed party leader, revealed on anonymity because he was not authorised to speak to the media on the issue, the President’s move during last Tuesday’s National Executive Council meeting was akin to a “checkmate in a game of chess.”

The party leader said, “President Muhammadu Buhari is the main reason why Chief (Odigie-) Oyegun lasted this long as chairman, many may not know or simply choose to disagree with this fact.

“Some of our governors, who felt comfortable with Oyegun’s leadership style, aligned with certain interests at the Villa to convince the President on the need to allow Odigie-Oyegun to complete his term despite resistance from people like Asiwaju Ahmed Tinubu.

“The argument then was that we should not behave like the Peoples Democratic Party where party chairmen were changed almost every year.

“They further argued that removing Odigie-Oyegun at that time, no matter his perceived indiscretions, would create some sort of instability within our party.

“It is not easy to convince President Buhari, but once he is convinced about something, he supports it wholeheartedly.

“Being the leader that he is and a person who swore to uphold the constitution, when his attention was drawn to the adverse consequences of this constitutional breach, he sought a legal opinion.

“His legal team, including the Vice-President, convinced him and he chose to err on the side of caution.”

The party leader also said, “Most of our northern governors are aware of the President’s principles on such matters and have since fallen in line.

“What is before us now is the setting up of the various congress and convention committees and agreeing on who the next chairman is.”

A highly-placed member of the party’s NWC, who also spoke on the condition of anonymity so as not to “ruffle feathers”, explained that the issue at hand went beyond the person of the party’s National Chairman.

On the contenders for the APC top job, he said, “For now, our choice is limited to Edo State. And like you may know, when you mention Edo, Adams Oshiomhole cannot be far away.”

The National Publicity Secretary of the APC, Malam Bolaji Abdullahi, was not immediately available for comments as he was said to have travelled outside the country. Calls to his mobile indicated that it was switched off.

But when contacted, the Plateau State Commissioner for Information and Communication, Yakubu Dati, said, “As a former speaker of the Plateau State House of Assembly, Governor Simon Lalong believes in the rule of law. He believes the party’s internal mechanism will resolve this matter amicably.”

However, it was gathered that some southern governors and ministers had started a campaign in support of tenure elongation for Odigie-Oyegun and others.

Investigations revealed that the address by the President did not go down well with the southern governors and ministers, who were already enjoying a smooth working relationship with the Odigie-Oyegun-led national executives of the party.

Ogun State governor, Ibikunle Amosun, could not be reached for his comments on the issue but the Commissioner for Information and Strategy, Dayo Adeneye, directed one of our correspondents to the leadership of the party in the state.

The Publicity Secretary of the state chapter of the APC, Mr. Sola Lawal, who spoke on behalf of the party, said the NEC remained the supreme body of the party, while the president is the leader.

He said, “The President only has a voice, the NEC is supreme.”

Lawal added, “It is not possible for an individual to foist a new candidate on the NEC without carrying everyone along.”