Nine knife-wielding Nigerians allegedly peddling drugs in Mumbai have been arrested by India’s Anti-Narcotics Cell (ANC). During the arrest on Friday night, police recovered 104 grams of cocaine and nine grams of mephedrone, all worth Rs 5.38 lakh, from the accused who attacked the cops with knives while resisting search. According to MumbaiMirror the accused…”
Editor
World News 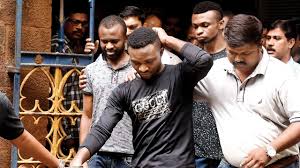 During the arrest on Friday night, police recovered 104 grams of cocaine and nine grams of mephedrone, all worth Rs 5.38 lakh, from the accused who attacked the cops with knives while resisting search.

The names were mangled by the officers as the Nigerians did not carry their passports on them, another offence, according to Indian law.

Investigators said three of the accused were also involved in an attack on officers of ANC’s Worli unit during an operation to nab a Nigerian national allegedly selling cocaine in Byculla on July 19.

Four police officers had sustained injuries in the attack.

While the attackers managed to flee then, a case was registered at the JJ Marg police station and night patrolling was increased based on Deputy Commissioner of Police Shivdeep Lande’s order.

“On Friday night, our officers, who patrolling the South Mumbai area, had neared the Eastern Freeway when they spotted some foreigners hanging around suspiciously under the bridge. The officers approached the group and was about to search them when two of them drew out knives and attacked them. While they attempted to flee, our officers, who had sustained minor injuries, managed to overpower them,” said an ANC officer.

During interrogation, three of the accused confessed to their involvement in the earlier attack in Byculla and revealed the identities of five others who were involved in the same.

“We are on their lookout,” said the officer.

“The accused obstructed police from discharging their duties and intentionally injured four personnel.

Plane crashes in Iran killing all 66 aboard