Nigerians may be showing immense interest for entertainment as N758.1 million was realised from movie sales in weekends from January-March 2019, according to statistics from the Cinema Exhibitors Association of Nigeria (CEAN) website. CEAN is an association of cinema owners, operators and managers incorporated by the Corporate Affairs Commission of Nigeria and is meant to…”
Yusuf
Entertainment 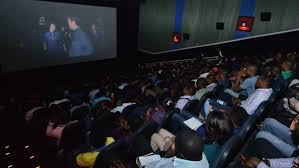 Nigerians may be showing immense interest for entertainment as N758.1 million was realised from movie sales in weekends from January-March 2019, according to statistics from the Cinema Exhibitors Association of Nigeria (CEAN) website.
CEAN is an association of cinema owners, operators and managers incorporated by the Corporate Affairs Commission of Nigeria and is meant to promote and protect the value of cinema exhibition in Nigeria.
A breakdown of the CEAN figure for January showed that in four weekends, the total gross of the top 20 movies was N289.6 million and they were viewed by 211,801 people; for February, it recorded N178.7 million from 133,132 people, and for March it was N292.5 million viewed by 211,007.
Movie ticket prices usually range from N1,000 – N3000 across cinemas, depending on the packages that come with it like complementary drinks and popcorn. The major film distributors across cinemas in Nigeria are FilmOne, Silverbird Film, Genesis Deluxe cinemas and Metro Classic.
Gbolahan Ologunro, an equity research analyst at Lagos-based CSL Stockbrokers, said Nigerians had always placed a premium on entertainment despite the fact that disposable income remained pressured.
Yinka Ademuwagun, a macroeconomic analyst at United Capital, said, “It is noteworthy that they are spending that much on leisure. And this is given that most of these figures are from urban areas where you will find cinemas. This says a lot about the movie industry.”
Recently, watching movies in cinemas seems to be the new ‘thing in town’ and this is aside from its entertainment values, movie-going is quickly becoming a lifestyle in which people go to the cinemas with their loved ones and friends to see movies and relax.
“The cinemas have a bigger space to enjoy the latest movies with loved ones while relaxing,” Ruth Udemba said, while expressing her love for the cinema.
Usually, people go to watch foreign movies (Hollywood) than home ones (Nollywood) but recently, people are beginning to appreciate the home ones.
For example, Chief Daddy, Up North, Mo’ Dorisa, Hire a Woman, The Big fat Lie, the and She, were some of the top charting Nollywood films for the three month period.
Movie producers have found cinema premiering as a means of escaping the gins of movie pirates. Also the Nigerian movie industry has been churning out quality movies worthy of people’s time and money, which makes them cinema-worthy.
“I usually download the latest foreign movies because they are accessible and have good quality but when it comes to the home movies, I watch it at the cinema. It is better enjoyed there,” Shola Awoniyi said.
A new cinema era began in 2004 with the launch of a series of modern cinema houses by the Silverbird Group and since then launch of the group, new cinemas like Ozone, Filmhouse and Genesis Deluxe have launched and are playing important roles in the evolution of the Nigerian film industry

King of Boys movie to premiere on Sunday, October 21