#Urges Private Universities To Lead Research And Provide New Ideas The Governor of Osun, Ogbeni Rauf Aregbesola has identified the situation of living on unearned income from rent as against income from productivity as the major challenge facing Nigeria in terms of its economic development. Aregbesola was the guest lecturer at the 10th Convocation‎ Lecture…”
Editor
featured hero News 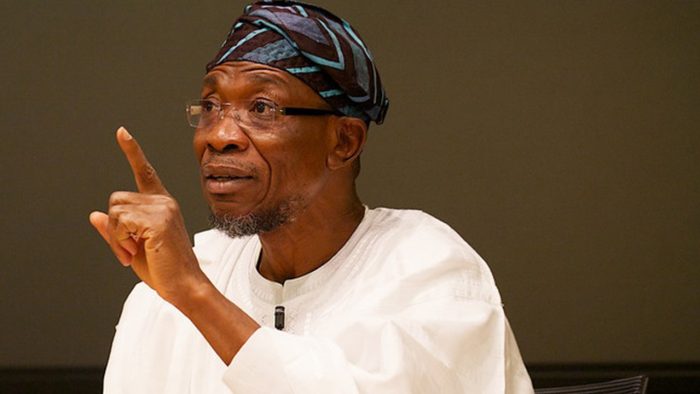 The Governor of Osun, Ogbeni Rauf Aregbesola has identified the situation of living on unearned income from rent as against income from productivity as the major challenge facing Nigeria in terms of its economic development.

Aregbesola was the guest lecturer at the 10th Convocation‎ Lecture of Lead City University at the institution’s conference centre in Ibadan. In the lecture titled, “Evolution of Private University Education and Issues Miscellany in Governance of the Federation”, he encouraged the Federal Government to directly create 50 million jobs, in a move that will turn Nigeria into an economic power in two decades.

“I will like to posit that we should get 50 million of our compatriots to be working i.e. engaged in productive activities that will bring them at least N25,000 a month. From this, N1.25 trillion will be generated in the economy every month from real productive engagement.

“These jobs can be created and paid for by ways and means in diverse areas of the economy like agriculture and food production, clothing and footwear, housing, environment, critical public infrastructure like roads, bridges, airports, railways, water resources development etc that will provide basic needs for the people and cut imports by 90 per cent, reducing foreign goods to critical machineries and raw materials we do not have at home. This will catapult Nigeria into a superpower within two decades”, he noted.

The Governor described the period as a time when applications to the Joint Admissions and Matriculations Board (JAMB) University Matriculation Examination (UME) had peaked at over 750,000, but the maximum admission granted was a paltry 50,000.

He emphasised that such action has disoriented more than 700,000 qualified secondary school leavers who could not find placement in the federal and state universities at the time.

‎Aregbesola noted that one of the challenges of society that the universities must solve is how to see university education as a compulsory social service which must be provided to the largest number of people at little cost.

Aregbesola lamented a situation where only the children of very few could afford the fees of private universities. According to him, “no civil servant can, from his or her legitimate earnings, afford these schools and their fees for their children. This has created a problem on its own. Recently, some students could not pay their fees in a university because they invested in Ponzi schemes that went flat and lost their money.

“One of the challenges of society that the universities must solve is how to see university education as a compulsory social service and which must be provided to the largest number of people at little cost.

“The next question, of course, is what happens to the students after they leave school. It has become fashionable to proudly claim to have attended a private university, for those who could not travel abroad. Whereas, the job market presently is saturated.

“The challenges of the time are different now. During the colonial period, high level manpower was needed to fill vacancies in the public service and the trading outposts of the metropolitan multinationals.

“A job, a car and a house were waiting for any graduate, irrespective of the course of study. The first graduates recruited into the Nigerian petroleum agency, the precursor of NNPC, studied physics.

“While the companies came to interview the students in their final year for placement, the joke then was that the students were the ones interviewing their employers because they were looking for the company making the best offer to join”. The Governor stressed.

‎He urged the graduating students of the university, to equip themselves with extreme courage and ‎confidence and not to be intimidated as they are moving into the labour world.

“Since life itself is full of challenges, then you must conquer your fears, anxiety and anything that can intimidate you as you are expected to be the solution providers in the new world you are transiting to” he told the graduates.

Aregbesola also urged the universities to be more beneficial to the society and make it better through research and new ideas.

Prof. Adeyemo commended Governor Aregbesola for registering his quality leadership in the political space in the country, saying his high level of intellectual capacity qualified him to be invited to deliver the institution’s 10th convocation lecture.

According to him, “Our institution is determined to ensure that we are at the top of providing the societal needs and as well creating enabling environment to grow quality education in the country.

“Lead City University cherishes its convocation lecture and we are very selective in the choice of our guest lecturers, so for us to have a personality like Aregbesola, it means he is no doubt eminently qualified.

“We have seen in Aregbesola a man of integrity, a man with rare passion for human and capital development, a man of substance and a right man who has distinguished himself for knowledge”. The Vice Chancellor told the gathering.

Professor Ogunmola said the university was established to meet the society needs and as well raise the bar of quality education through the provision of an enabling environment for quality knowledge acquisition.