Pentagon has disclosed that U.S soldiers have trained Nigerian on a six-week advice-and-assist mission in Jaji, Kaduna State. The U.S. Department of Defence said Nigerian Army’s 26th Infantry Battalion might be the next to deploy to Northeast to confront the violent extremist organisation, Boko Haram. The department, while documenting some accounts of the U.S. soldiers during the…”
Editor
News 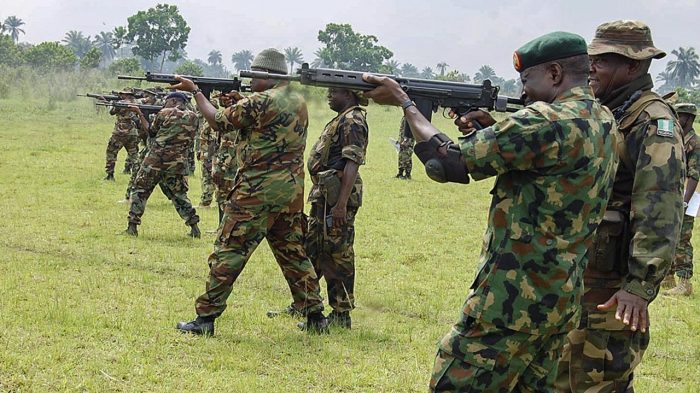 Pentagon has disclosed that U.S soldiers have trained Nigerian on a six-week advice-and-assist mission in Jaji, Kaduna State.

The U.S. Department of Defence said Nigerian Army’s 26th Infantry Battalion might be the next to deploy to Northeast to confront the violent extremist organisation, Boko Haram.

The department, while documenting some accounts of the U.S. soldiers during the training said it was important to prepare the Nigerian troops for the threats they faced from the terrorists.

Sgt. Saul Rodriguez, the most experienced of the 12 U.S. soldiers said “even in triple-digit heat and with AK-47 automatic rifles in hand, it’s easy to forget these soldiers are likely headed into imminent danger”.

“My job is to train you as much as I can. Your job is to fight the bad guys out of your country,” Pentagon quoted Rodriguez as shouting to a group of soldiers demonstrating their best cover and concealment efforts behind Jaji’s bushes and trees.

Staff Sgt. Kevin Martin of the 10th Mountain Division Fort Drum, New York, said after lecturing the troops on the significance of maintaining noise discipline that they needed the skills as they faced real threats.

“Yes. We are hard on them. We have to be. Their life depends on it. They might need these skills one day.

“They face a very real and lethal threat. We aren’t going to slow down; we are going to pack as much training in as possible,” Martin said.

Capt. Stephen Gouthro said this life-altering responsibility to prepare Nigerian soldiers was not lost on him, adding one of the best parts of the mission was the lack of micromanagement.

Gouthro said: “What better way to demonstrate mission command. This mission isn’t only about the tactical.

“Everything our team does could have diplomatic effects. Out here, the team has to be professional, mature and disciplined. And we are.”

Pentagon said: “All in all, this mission is the definition of the U.S. Army’s top priority: readiness.

“From pack-out preparations to redeployment operations, this mission challenged junior officers and noncommissioned officers (NCOs) to work without built-in support from ‘Big Army’.

“Austere conditions, local negotiations, food from the economy, far from higher headquarters, limited digital capabilities, diplomatic implications and foreign-military engagements are only a few examples of how this mission has made these men more ready”.

It said a small support team travelled to Jaji about four weeks into the mission, flying down from U.S. Army Africa’s headquarters in Vicenza, Italy.

“The travellers asked Gouthro if the team had any requests. Historically speaking, soldiers ask for candy, SIM cards or extra soap. Not this team. Gouthro’s priority remained the mission.

“He asked for a sizeable knife for a graduation gift to give the Nigerian company’s commander and some smokeless tobacco, commonly known as ‘dip’, for one of his NCOs,” Pentagon said.

The department noted that the cohesion brought on by an austere living environment around Jaji, carried into the work.