A 17-year-old patient, Ganiyu Jinadu, who sustained severe burns from a gas explosion at a fuel station in Abeokuta has been ‘detained’ by the management of Federal Medical Hospital, FMC, Abeokuta over the inability of his family to offset the sum of N150,000 medical bill. Mr Jinadu, who survived the fire that claimed the lives…”
Yusuf
Oduduwa 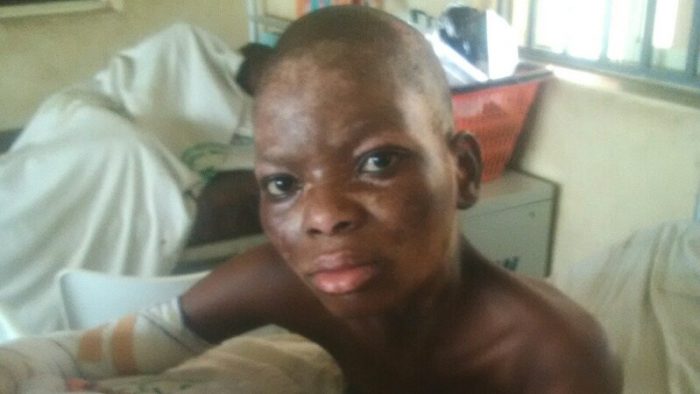 A 17-year-old patient, Ganiyu Jinadu, who sustained severe burns from a gas explosion at a fuel station in Abeokuta has been ‘detained’ by the management of Federal Medical Hospital, FMC, Abeokuta over the inability of his family to offset the sum of N150,000 medical bill.

Mr Jinadu, who survived the fire that claimed the lives of five other victims at Adigbe area of the town about four months ago, was admitted to the hospital, where he received medical attention.

His mother, Tolani Jinadu, said having spent all she has, the hospital management was magnanimous to continue the treatment despite her inability to continue to pay her son’s bills.

After being referred to another hospital on April 27 for another stage of skin grafting, the family was told the teenager owes an outstanding bill of N150,000 at the FMC.

She said the management of the hospital refused to release her son for the further treatment until the bill is paid.

The single mother called on Nigerians to assist her.

Mrs Jinadu, a petty trader who lives at number 4, Iyana Oluwo, Onikolobo, Abeokuta said the patient had earlier undergone two surgical operations which cost huge sums before he was recommended for the skin grafting.

When visited at the hospital, the patient with hospital number 133282 was found on bed number 23 in the male surgical ward.

He was referred to the consultant-in-charge of Burn Centre, Gbagada Hospital, Lagos, but could not go because of the unpaid outstanding bill.

The referral letter signed byJ. A Akindipe of Department of Surgery, Burns and Plastic Unit of the FMC was dated April 27. The letter showed that the patient was presented at the hospital’s accident and emergency unit on January 17.

“He was a victim of major burn injury from a gas explosion at a petrol filling station. He was admitted and resuscitated,” the referral letter stated.

“When the wound became clean enough, we commenced stage skin grafting. He has had two stages so far. However, there was wound infection because of irregular dressing caused by patient’s refusal to have to dress despite oral morphine among others. Further grafting may require the use of dermatome and mesher which are not available here. Hence, this referral,” the letter stated.

Almost two weeks after the referral, however, the hospital has refused to let the teenager leave.

When our reporters were  Contacted thePublic Relations Officer of the FMC, Segun Orisajo, he refused to answer directly whether or not the patient was being ‘detained’ against doctor’s advice and against his will.

He, however, said the patient was in good care at the hospital.

“I can confirm the patient in question is with us and has been receiving the best of medicare from our specialists since on admission,” Mr Orisajo said.

Ownership Of Lagos: Between Distortion And Obvious Facts By Rasheed Ojikutu