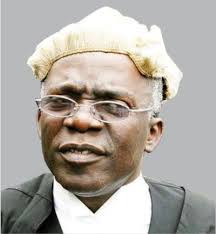 A human rights lawyer and Senior Advocate of Nigeria, Femi Falana, has explained that Sunday Igboho Cannot be extradited to Nigeria without due process of law.

Falana, in a statement made available to the press, titled ‘WHY SUNDAY ADEYEMO CANNOT BE EXTRADITED TO NIGERIA WITHOUT DUE PROCESS’, said one Tidjani was forcefully arrested in Benin and brought to Nigeria but ended up dying in detention before the conclusion of his trial. That the situation attracted condemnation from the human rights community.

He also cited the arrest of the leader of the Indigenous People of Biafra, Nnamdi Kanu as another example of failure of FG to follow due process

He said, “Sometime in 2003, a detachment of the Nigeria Police Force invaded Benin Republic and forcefully arrested Hammoni Tidjani, who was alleged to be behind the several cases of trans border crimes including armed robbery, car snatching and money laundering. He was brought to Nigeria and chargedbefore the Ogun and Lagos States High Court. He was standing trial in the Lagos High Court when he was reported to have died of stroke in a crowded cell at the Kirikiri Maximum Correctional Centre. The brutal treatment meted out to him and the breach of the sovereignty of Benin Republic attracted the condemnation of the human rights community.

“A few weeks ago, the leader of the Indigenous People of Biafra (IPOB), Mr. Nnamdi Kanu was allegedly abducted in Nairobi, Kenya and forcefully brought to Nigeria by security forces. Even though Kanu was liable to be arrested and brought back to Nigeria to face trial having jumped bail the refusal of the Federal Government to follow due process in the case has exposed Nigeria to international opprobrium. However, unlike Kenya, the Republic of Benin has rejected the demand to deport Chief Adeyemo (a.k.a. Sunday Igboho) outside the ambit of the law. Hence, the Federal Government has submitted a request for the extradition of Igboho in accordance with the provisions of the Ecowas Convention on Extradition and the Extradition Law of Benin Republic”

Falana narrated how Igboho was arrested and made reference to the media reports that Igboho is currently under detention in Benin.

Falana argued that Igboho cannot be extradited to Nigeria without due process by reason only that he was arrested by interpol. According to him, even the African Charter on Human and Peoples Rights enjoins that expulsion from a country has to be done in accordance with the law.

He emphasized that the request submitted by Buratai for the extradition of Igboho was done in haste and therefore not a proper request. He added that the detention of Igboho is provisional and will terminated after 20 days.

“On July 1, 2021, the residence of Chief Sunday Adeyemo (a.k.a Igboho) at Ibadan, Oyo State was raided by armed operatives of the State Security Service (SSS). Even though Igboho escaped arrest two of his guards were killed while 13 other people were forcefully arrested in the compound and taken to Abuja where they have since been held incommunicado. Thereafter, Igboho was declared wanted and put on International Criminal Police Organization (INTERPOL) watch-list by the State Security Service (SSS). We have however confirmed that Igboho and his wife were arrested by Interpol in Cotonou, Benin Republic on Monday, July 19, 2021 on their way to Germany.

“According to media reports, Igboho and his wife are currently being detained by the police authorities in a criminal police station in Cotonou. If they are indicted for breaching the criminal code of Benin Republic, they are liable to be arraigned before a criminal court in Cotonou. Contrary to speculations in the media, it is submitted that Igboho cannot be expelled from Benin and deported to Nigeria on the basis of his arrest by Interpol without due process as prescribed by Article 12(4) of the African Charter on Human and Peoples Rights which provides that “A non-national legally admitted in a territory of a State Party to the present Charter, may only be expelled from it by virtue of a decision taken in accordance with the law.”

Accordingly, upon the receipt of a request for the extradition of Igboho, the Government of Benin Republic will be under a legal obligation to commence extradition proceedings in one of its domestic courts. It is pertinent to point out that by virtue of Article 28 (2) of the ECOWAS Convention on Extradition, the procedure with regard to extradition and provisional arrest are governed solely by the law of the requested State, i.e. Benin Republic.

“Apart from providing for a speedy extradition procedure, the government of Benin Republic shall ensure that Igboho, whose extradition is requested, has the right to be heard by a judicial authority and to be assisted by the lawyer of his own choice. Nigeria is specifically requested by Article 4 of the ECOWAS Convention on Extradition to convince the Court in Cotonou that the offence in respect of which Igboho is wanted is not political or for the purpose of prosecuting him on account of his ethnic group or political opinion. Various provisions of the African Charter on Human and Peoples’ Rights and the International Covenant on Civil and Political Rights, to which Nigeria is also a party, apply as well. As noted, if the person is lawfully within the territory of the rendering State, extradition requires due process.

“Furthermore, an extraordinary (extra-legal) rendition frustrates the requirements of the African Charter and the Covenant that anyone who is arrested or detained should have a right to challenge the validity of his or her detention. The seizure and rendition of suspects may be characterized as a “forced disappearance” under international human rights law, by which an individual is abducted by persons acting on behalf of or with the acquiescence of the State, followed by a denial (or obfuscation) of information or other forms of accountability by State authorities.

“From the information at our disposal, the new Ambassador of Nigeria to Benin Republic, General Yusuf Buratai (retd) has hurriedly submitted an application for the deportation of Igboho to Nigeria. With respect, the request cannot be granted as it has to comply with Article 18 of the Extradition Convention. It is not sufficient to state that Igboho is wanted for terrorism and murder. The request must be supported by a statement of the offences for which extradition is requested, the time and place of their commission; their legal descriptions; and a reference to the relevant legal provision shall be set out as accurately as possible; and an authenticated copy of the relevant law indicating the sentence which may be or has been imposed for the offence. To that extent, the Republic of Benin has not received a proper request from the Federal Government for the extradition of Igboho.

“Meanwhile, the Government of Benin Republic is detaining Igboho provisionally to await the request of the Federal Government for his extradition. It should be noted that the provisional arrest may be terminated if, within a period of twenty (20) days after the arrest, the requested State has not received a request for extradition from the requesting State in accordance with Article 15 of the ECOWAS Extradition Convention. If there is no strong evidence that Igboho has committed criminal offences the Federal Government should not embarrass the country by requesting for his extradition.”