The General Assembly of the Nigeria Football Federation NFF met on Thursday at the Edo Heritage Hotel in Benin City. The assembly led by the NFF President, Amaju Pinnnick discussed and resolved the lingering issues as it affects football administration in the country. Here is their full resolution: NFF COMMUNICATIONS DEPARTMENT COMMUNIQUE OF THE EXTRA-ORDINARY…”
Yusuf
Sports 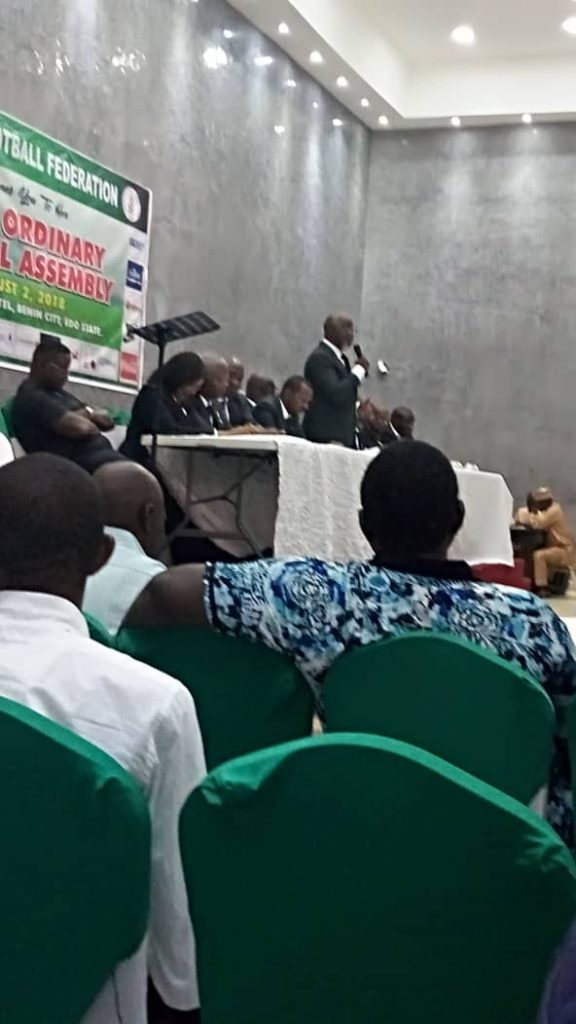 The General Assembly of the Nigeria Football Federation NFF met on Thursday at the Edo Heritage Hotel in Benin City.

The assembly led by the NFF President, Amaju Pinnnick discussed and resolved the lingering issues as it affects football administration in the country.

Here is their full resolution:

2. In attendance at the Congress were representatives of the 44 affiliates of the NFF, comprising of chairmen and secretaries of the affiliates.

3. The Congress, having been briefed by the NFF Executive Committee on the current situation of Nigeria Football, deliberated upon and reviewed all the issues, and arrived at the following resolutions:

a) The Congress expressed appreciation to the Federal Government and, in particular, President Muhammadu Buhari (GCFR), for the continuous support the Government has been giving football development, including the unequivocal endorsement of the applicability in Nigeria of the tenets of Association Football, in line with the best international practices. The Congress duly appreciates this support, as it is clearly the panacea that would drive sustainable football development in Nigeria.

c) Emphasized that the adoption of the operation of the NFF Statutes in Nigeria (Management and Regulation of football activities in Nigeria) was duly approved and endorsed by the Federal Executive Council (FEC) at its meeting of Wednesday January 5th, 2005 Conclusion EC (2005) 1st Meeting. The National Assembly also duly approved and endorsed this decision of Federal Government. Furthermore, the Federal Government also duly provided a written undertaking to FIFA in 2007, as a condition for Nigeria’s further membership and participation in FIFA and its activities, to guarantee that NFF is strictly organized, administered and regulated in line with the NFF Statutes.

d) That, consequent upon a previous oral undertaking which culminated in the written one in the same terms by the Federal Government, since 2006, football in Nigeria has been administered in line with the Federation’s Statutes, which clearly prohibits any member or stakeholder from taking football matter to ordinary court of law.

e) Furthermore, the rules of Association Football (NFF and FIFA Statutes) which strictly forbids any member from taking football matters to ordinary courts of law, rather provides internal mechanisms within the football statutes to resolve any disputes and/ or grievances of any member. Indeed, it is a precondition and obligation for all FIFA members to agree to these simple principles as a condition for membership of FIFA and/or participation in FIFA events and programs. In view of this, every genuine stakeholder in Association Football has the obligation to abide by these rules and regulations and follow the laid out processes to ventilate any grievances.

f) Duly noted the current unwarranted happenings in Nigeria football occasioned by the fact that some stakeholders, flagrantly, and in clear violations of the football rules and regulations have taken football matters to ordinary courts of law, over election matters that have since been resolved by the Court of Arbitration for Sports, Switzerland, in line with the applicable football rules and regulations.

g) Affirmed, without equivocation, that the only valid NFF elections held in 2014 is the September 30th, 2014 elections in Warri, in which the entire stakeholders and Congress participated and voted in and, was won by Amaju Melvin Pinnick and other members of his Executive Committee, as endorsed by FIFA.

h) Affirmed that issue of 2014 NFF elections has been duly disposed of by the Court of Arbitration for Sports (CAS) in Switzerland with its ruling of May 18, 2015, upon a petition against FIFA and NFF by Chris Giwa and others. This clearly establishes that the matter has been disposed of from a legal perspective in line with the applicable and binding Association Football rules and regulations. Therefore, there is no basis or foundation for the current court actions in the Federal High Court, Jos in Suit no FHC/J/CS/177/2014 over the same matter as it is clearly ultra vires to football rules and regulations. It is simply an unnecessary distraction to and detraction from the sustainable growth of football in Nigeria and has the potential to get Nigeria suspended from being a member of the global football family, FIFA.

i) Affirmed that the NFF did not take any matter to ordinary courts but is obligated to file appeals, motions and applications to defend the suits filed against the NFF by these stakeholders. Indeed, the NFF has filed a Motion on Notice, since 2014, to challenge the jurisdiction of the courts to hear this suit since the matter is purely a football matter, subject to the rules and regulations of Association Football. This motion is still pending and yet to be decided. The Congress duly empowered the NFF Executive Committee to continue to explore all available legal means to protect Association Football against any affront.

a9) The Congress unanimously resolved that henceforth any member of the football family that takes any football matter to the ordinary courts of law would be automatically expelled from all football activities with immediate effect from the date of filing such proceedings or law suit.

aa) The foregoing notwithstanding, the Congress having duly deliberated on the current situation and, in view of the calls from all stakeholders to provide a lasting solution to the current situation, approved the provision of the following window for any stakeholder, including Chris Giwa and his collaborators, with a pending court case to retrace their steps and reconcile with the football family upon the fulfilment of following terms:

1) Ensure the dismissal of all pending Court cases against NFF and its leadership, within 2 weeks of this resolution.

2) File affidavits in court to affirm to be bound by and uphold the football statutes and, undertake not to take any football matter to court but, to resolve any disputes and/or grievances within the available alternative dispute resolutions mechanism enshrined in the football statutes.

3) Upon the fulfilment of 1 and 2 above, the Congress hereby empowers the NFF Executive Committee to immediately commence the process of unbanning and or removing any penalties on persons that are currently under sanctions for breaches of the NFF Statutes, provided they first comply fully by withdrawing the court cases and filing the required affidavits.

ab) The Congress also reviewed the matter of Giwa FC, that was expelled from the NPFL in 2016 and, affirmed that the club was expelled not on account of any crisis in Nigerian football and/or the claim or challenge by Chris Giwa to NFF leadership, but for multiple breaches of the framework and rules of the league (deliberately missing 3 cumulative matches within a season). Congress noted that Giwa FC had the opportunity to appeal the decision through the league rules and other football mechanisms but instead, approached the ordinary courts by filing a suit at the Jos High Court to challenge the league ruling, including contempt proceedings against the league leadership. Congress noted also that the matter was eventually decided by the Court of Appeal, Jos in favour of the League. However, the Congress further noted that Giwa FC was never expelled from participating in league football totally but relegated to the lower league as provided in the league rules. Consequently, as part of reconciliation, the Congress has mandated the Executive Committee to, upon application by Giwa FC, immediately permit the registration of Giwa FC to commence participation in the 2018 Nigeria National League. All matches are to be rescheduled in the league to accommodate the club and NFF shall provide reasonable support to the clubs in the division to accommodate these additional matches with Giwa FC, which are not captured in their budgets.

ac) The Congress as part of the wider reconciliation efforts, has mandated and approved for the NFF Electoral Committee elected by the Congress pursuant to the NFF Statutes at the NFF General Assembly in Jos, October19th 2017, to immediately take and acknowledge the following steps:

1) Review the ongoing NFF electoral processes, guidelines and reopen the process for any qualified interested stakeholder to participate, including those that may qualify after meeting the set conditions of taking football matters out of ordinary courts as outlined above.

2) Adjust the election calendar to a suitable date in view of the fact that CAF has fixed its Extra Ordinary General Assembly in Egypt on the same date as the proposed NFF Elective Congress (September 29th 2018).

3) Accordingly, the Congress has unanimously approved and endorsed the suspension of all provision of the NFF Statutes, Electoral Code and Elections Guidelines that are time-bound to ensure the seamless implementation of the above directives and approval by the Electoral Committee.

4) All candidates for elections must undertake to work with the entire football family whether they are ultimately successful, or not, at the elections.

ad) The Congress implored all stakeholders interested in being part of NFF Executive Committee to subject themselves to and come through the legitimate electoral process as outlined in the statutes and, assures all parties of the support of the football family; provided they assume their positions through the legitimate process.

ae) The Congress further approved for the Executive Committee to take all necessary steps and actions where necessary to bring the entire football family together and ensure all parties are working for the overall interest of football.

af) The Congress implored the National Assembly to fast-track the conclusion of the NFF Bill, which has already passed third reading in both chambers and awaiting harmonization and transmittal to the President/C-in-C for assent. The Congress noted that the NFF Bill would provide the platform that would completely eliminate most of the current challenges being experienced and ensure the sustainable development of football in Nigeria. The Congress further noted that the NFF Statutes would consequently be duly amended to conform to the current realities of modern football management and the provisions of the NFF Bill as well as ensure inclusivity and optimization of service delivery at all levels

ag) The Congress expressed its unreserved apology to all the Football stakeholders, sponsors, partners, and all Nigerians for the current unwarranted situation of Nigerian Football and assures all parties that all necessary steps would be taken to resolve the issues, as outlined above and strategies implemented to ensure these issues never recur.

ah) The Congress mandated the Executive Committee to ensure the commencement of all football programs, including Leagues, Aiteo Cup, Zenith Bank U13 & U15 Future Eagles Championship, among others, and directed the relevant NFF standing committees to appropriate support in this regard.

ai) The Congress expressed its congratulations to the NFF President, Mr. Amaju Melvin Pinnick for his nomination as CAF 1st Vice-President, and enjoined all stakeholders to rally round him to provide all the support needed to ensure he successfully delivers on his mandate.

b9) Congress expressed appreciation to the Government and people of Edo State, particularly His Excellence, Governor Godwin Obaseki and Members of his cabinet, for the support given to the NFF Congress to hold its Extra-Ordinary General Assembly in Benin City.

ba) The Congress passed a vote of confidence on President Amaju Pinnick and the NFF Executive Committee under his headship for their laudable leadership and management of Nigerian Football.

This Nigerian Athlete Earns A Spot In US Athlete Record

Arsenal makes victory with 2-1 against Newcastle