The new Acting Director, Defence Information, Brig.-Gen. Tukur Gusau, on Tuesday took over the Directorate of Defence Information from the erstwhile director, Maj.-G en. Jimmy Akpor. It was gathered that Akpor was moved to Army Headquarters as Director Personnel Services. Gusau commended his predecessor for forging better relationship with the media which helped to positively…”
Olamide
News Security 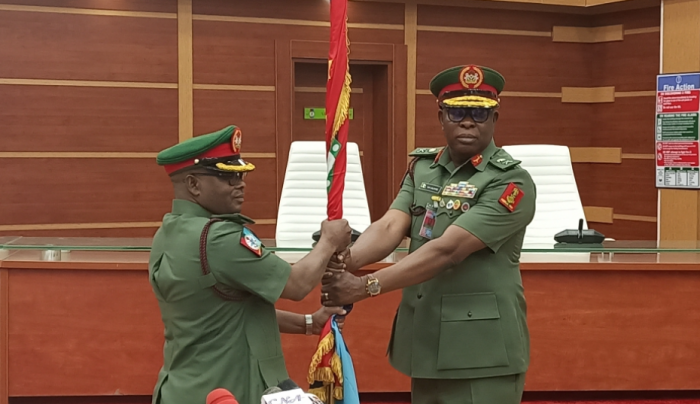 It was gathered that Akpor was moved to Army Headquarters as Director Personnel Services.

Gusau commended his predecessor for forging better relationship with the media which helped to positively project the operations of the armed forces.

He also appreciated the media for the continuous support of the armed forces, and called for stronger relationship between the military and the media on matters of national security.

According to him, “I urge you to provide the enabling environment for members of the armed forces of Nigeria to perform their constitutional roles without distractions.

“As the nation gradually approach the coming general elections starting from next month, I urge you to avoid reports capable of affecting the morale of our gallant troops and the credibility of our armed forces,” he said.

Gusau assured that the armed forces would assist media practitioners to discharge their duties where necessary.

He added that the military would also support other government agencies to achieve peaceful and credible elections across the country.

The director described the military and the media as partners in progress, saying the two should strive to promote the interest of the country at all times.

“I urge you to offer me the same support, cooperation and understanding which you have rendered to Maj.-Gen. Akpor as Director of Defence Information,” he said.