The Nigerian Navy has apprehended three suspected rice smugglers in Ibaka, Mbo Local Government Area of Akwa Ibom State They also seized 759 bags of rice smuggled from Cameroon. A wooden boat was also been confiscated in the seizure. The suspects, Yahaya Balaribe, 32, from Borno State; Godwin Owoyemi, 23, and Michael Aderemi, both from…”
Editor
News 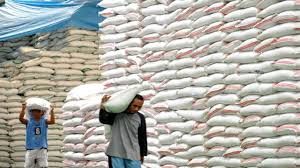 A wooden boat was also been confiscated in the seizure.

The suspects, Yahaya Balaribe, 32, from Borno State; Godwin Owoyemi, 23, and Michael Aderemi, both from Igbokoda area of Ondo State, were said to have been apprehended on the high sea on Tuesday around 3am following a tip-off as they made their way into Nigeria’s maritime area.

The Commanding Officer, FOB, Navy Captain Yusuf Idris, on Wednesday asked smugglers to stay away from Nigeria’s maritime environment, noting that the current leadership of the Nigerian Navy would find them wherever they might be.

He said, “On January 30, the men of the Forward Operating Base, Ibaka, acting on a tip-off, intercepted and seized a large wooden boat loaded with 759 bags of rice. We also arrested three suspected smugglers along with the items.

“In line with the harmonised standard operating procedures, the Nigerian Navy, today hands over the suspects and the items to Nigeria Customs Service for investigation and further necessary actions.

“The Nigerian Navy, FOB, warns the would-be smugglers and other maritime offenders like sea pirates, oil thieves and their like to keep away from Nigeria’s maritime environment as the current leadership of the Navy will hunt them down wherever they may be.”

The commanding officer assured legitimate users of the sea of navy protection and assistance to carry out their legitimate businesses with a view to enhancing the economic prosperity of Nigeria.

The Comptroller of Eastern Marine Command, Nigeria Customs Service, Port Harcourt, Ajiya Masaya, who received the three smugglers and the goods, described the fight against smuggling as a collective responsibility of Nigerians.

According to him, smuggling is affecting the Nigerian economy and any nation that allows smuggling to thrive will be unable to grow its economy.

He thanked the Navy for collaborating with the NCS to curtail the spread of smuggling within Nigeria’s maritime environment.

He said, “Fighting smuggling cannot be left only for the Nigeria Customs Service. Everybody has a duty to stop or reduce the menace.

“As I said, fighting smugglers is not only for Customs; everybody has a role to play. Please, as a member of the community, rice is still a contraband item; 2018 fiscal policy that recognises imported rice as a contraband good, is still in force.”