Nasir -Rufai And The Question Of Mediocrity, By Sonola Olumhense

I wholeheartedly applaud the decision of Kaduna State governor Nasir el-Rufai to fire nearly 22,000 of his teachers and replace them with tested ones. The decision followed a process in which two of every three teachers could not pass a Primary Four competency test. On Twitter last Thursday, the governor published some of the atrocities…”
Editor
Op-Ed 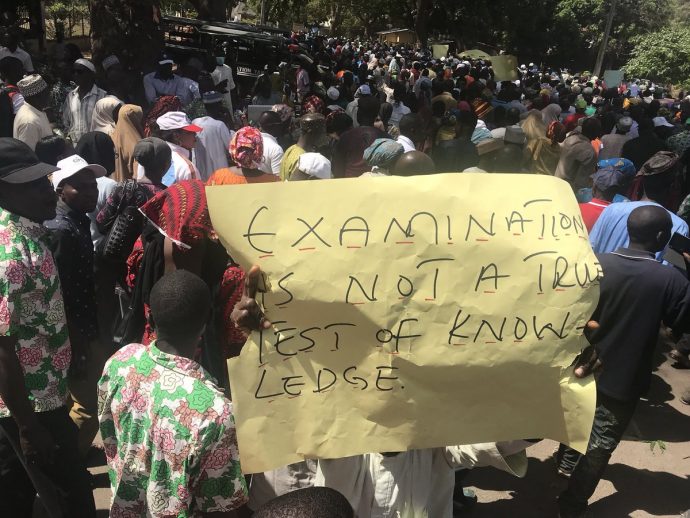 I wholeheartedly applaud the decision of Kaduna State governor Nasir el-Rufai to fire nearly 22,000 of his teachers and replace them with tested ones.

The decision followed a process in which two of every three teachers could not pass a Primary Four competency test. On Twitter last Thursday, the governor published some of the atrocities produced by some of the teachers in the test.

Read some of those papers, Senator Shehu Sani (APC-Kaduna Central Constituency), and you should be ashamed. The senator rushed to the press, describing the firing plan as the “height of lunacy,” and as “a plot to employ political loyalists of the governor.”

According to the Senator, “(Governor El-Rufai) promised the people of the state that he will enroll his children in public school when he becomes governor, he has not only failed to do that but he is destroying the educational future of those who chose to send their wards to public school. Incompetence is not a reason but an excuse to sack thousands of teachers owed salaries for months.”

I subscribe fully to holding political office holders to account, and the senator has questions he should be asking the governor. But blackmail is not a question, it is a crime. And it is a particularly bad strategy for eliciting transparency.

The truth is that what El-Rufai is combating is not simply bad or unqualified teachers. It is the scourge of mediocrity in Nigeria, beginning with the public services. The scandalous examples of those teachers published by the governor last week to illustrate his determination to fire them underscore the scale of the problem.

I have chosen the word, scandalous, carefully. It is scandalous that anyone would have hired such “teachers” in the first place. Queried the governor, “Would you allow someone like this teach your child?”

It did not seem to matter to the Nigeria Labour Congress (NLC), which authorised the Nigeria Union of Teachers in Kaduna to organise a protest rally.

It is not surprising that there are some people and institutions, exemplified by Senator Sani and the NLC, who seem to believe that a teacher is a teacher. The extension of that argument is that it does not matter what quality of education a child gets.

It is a stupid argument, but not one that is difficult to understand: we have become a nation of poor values. But you simply cannot suggest that a child is entitled to unqualified teachers and claim to have faith in the future at the same time.

Governor El-Rufai has explained that the debris in teaching in Kaduna State was emptied into the system because teacher-recruitment became a victim of politics, with politicians, bureaucrats and local government officials finding it to be a dumping ground for a variety of unqualified persons. It is a story that other state governors should learn from.

“Teachers were employed at the local government level without adherence to standards,” he said last week. “In many instances, no examinations or interviews were conducted to assess the quality of recruits. Political patronage, nepotism and corruption became the yardstick, thus giving unqualified persons a way in. Teaching jobs were given as patronage to those connected to politicians and bureaucrats.”

It is the truth. The same explanation applies in the civil service, but it is in teaching that the greatest danger exists because the damage is replicated and multiplied with each damaged child.

Which leaves Governor El-Rufai’s basic question: “Would you allow someone (who does not know how to teach or what to teach ruin) your child?”

Now, would you? In effect, anyone who says the fired teachers should be allowed to keep their jobs answers that question in the affirmative. We summon cheap arguments and blackmail to disguise the point that you need a leader to make the difficult decisions.

Anyone can make the politically-convenient ones, but if the future is to be any better than the present, the difficult decisions, including eliminating thugs and semi-illiterates masquerading as trained and competent teachers, must be made.

But the challenge is far bigger: the situation in Kaduna over unqualified teachers is really the question of standards in Nigeria, and the prevalence of mediocrity in public service.

When presidents and governors, rather than seek the most qualified and motivated, choose party hacks, relatives and mistresses for critical appointments, ministers and commissioners and permanent secretaries and managing directors—as well as those hacks and relatives—do the same.

In turn, when ministers and commissioners and permanent secretaries and managing directors choose party hacks, relatives and mistresses over the most qualified and motivated, they use the same template to poison their offices. The job is either an award or a reward, and competence and accountability are not suggested, let alone demanded.

Everyone knows that this: the practice and persistence of poor and wrong appointments, is largely why Nigerian public institutions fail. Only last week, for instance, following a newspaper story that 81 of President Muhammadu Buhari’s appointments are from three northern states, the presidency responded with a 159-person submission it described as a ‘full list’ of all his appointments.

“To claim, suggest or attempt to insinuate that the President’s appointments are tilted in favour of a section of the country is simply untrue and certainly uncharitable,” said spokesman Femi Adesina.

But the presidency was wrong, a close examination of the list showing it to be littered with sundry errors and misrepresentation.

Questioned, Mr. Adesina said his “full list” was not “completely exhaustive,” there being appointments he had not reflected. “It’s just to show that the paper that published 100 and said 81 was from the North is not right. It was a mischievous story.”

Perhaps. But that would make the 159-person claim of a “full list” a fabrication. Nothing prevented the presidency from telling the truth, the whole truth and nothing but the truth in one intervention.

And official fabrications, including appointing unqualified teachers, have made Nigeria a joke for nearly 60 years and crumbled our institutions. Eighty-one or 200 persons of the most demonstrably qualified and committed, even if they are from the same local council area, will lead a nation to great heights.

In Nigeria, the international capital of hypocrisy, the job of such appointees is persistently to explain not how great things were accomplished, but why failure was the only option. For a living, they construct excuses rather than structures and institutions which elevate the people.

Think about it: preceding the presidency’s 159-person howler was its fugitive Abdulrasheed Maina reinstatement-with-promotion-and-four-year-back-pay scandal. That was preceded by the mess in the Ministry of Petroleum.

Think about it: only last week, the World Internal Security and Police Index, an initiative of the International Police Science Association and the Institute for Economics and Peace, announced its rankings of 127 of the world’s police forces. The Nigeria Police ranked the worst, at 127th.

Similarly, the World Health Organisation has ranked Nigerian roads among the world’s most dangerous for driving. And yes, unlike 2016 when we had only one airport listed among the world’s 10 worst, this year we have two!

A speech is not an achievement.

Buhari At 76: Why We Love This President By Femi Adesina

What Is President Buhari Doing With The $74 Million Repatriated Malabu Oil Scam Money? By Erasmus Ikhide

Together, a Great Nation, By Olusanya Anjorin