What was surely a thrilling match at Stamford Bridge on Saturday as Chelsea and Manchester United played a 2-2 draw was marred by Jose Mourinho’s anger when a Chelsea staff taunted him. Mourinho took exception to the celebrations of one of Sarri’s backroom staff, Marco Ianni, who ran in front him on the touchline, as…”
Editor
Sports Tits Bits 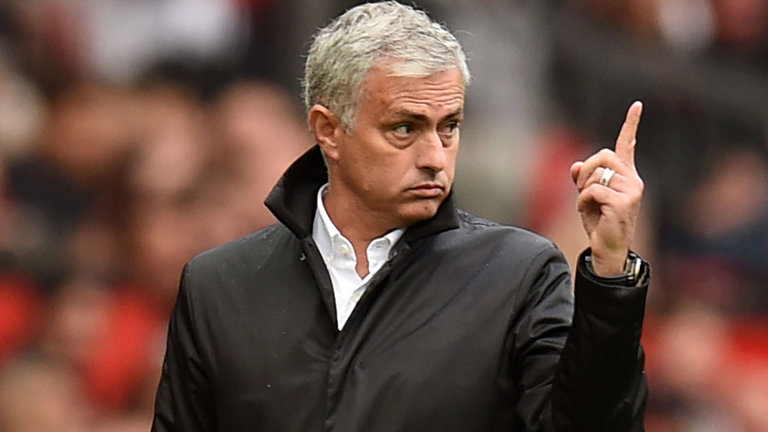 What was surely a thrilling match at Stamford Bridge on Saturday as Chelsea and Manchester United played a 2-2 draw was marred by Jose Mourinho’s anger when a Chelsea staff taunted him.

Mourinho took exception to the celebrations of one of Sarri’s backroom staff, Marco Ianni, who ran in front him on the touchline, as he seemed set for a sweet victory over his old club.

The incident happened was in the aftermath of Ross Barkley’s 96th minute equaliser to salvage Chelsea’s unbeaten record under Maurizio Sarri.

Mourinho had to be restrained by stewards to avoid a fisticuff with Ianni.

Rudger and Willian, after Chlesea scored the opening goal
Also players and coaches from both benches had to to separated in a melee that followed.

Mourinho also then gestured with three fingers towards the Chelsea fans in reference to the three Premier League titles he won for the club in two spells in charge.

A draw was more than Mourinho got on his three previous returns to Stamford Bridge as United boss. But his frustration at blowing what could have been a huge win was obvious as the visitors remain seven points adrift of Chelsea, and could fall nine points behind Manchester City and Liverpool should they win their respective fixtures later Saturday.

Amid reports he was set to face the axe, Mourinho had been handed a lifeline by a stirring fightback from 2-0 down to beat Newcastle 3-2 before the international break a fortnight ago.

Martial was rewarded for coming off the bench to score in that game as rather than opt for his cautious nature, Mourinho named an adventurous line-up also featuring Juan Mata, Marcus Rashford and Romelu Lukaku.

And his gamble looked set to pay off despite falling behind to a Chelsea side now unbeaten in their first 12 games under Sarri.

Lukaku had the first significant chance of the game when he headed Luke Shaw’s fine cross high and wide.

At the other end, United attempted to stop the outstanding player of the Premier League season so far with some rough treatment as Nemanja Matic and Ashley Young were shown early yellow cards for chopping down Eden Hazard.

However, when Shaw cut out a dangerous low cross from the Belgian on 21 minutes, the visitors were undone by a lack of concentration from Paul Pogba.

Rudiger easily peeled away from the Frenchman to plant a powerful header past the helpless David de Gea.

That was the fourth time United have conceded from a corner in the league this season, having also done so in defeats to Brighton, Tottenham and West Ham.

It wasn’t so costly this time as Chelsea paid for a lack of killer instinct despite dominating possession for the rest of the first-half.

Marcos Alonso mis-controlled when Rudiger’s through ball put him clean through on De Gea before Alvaro Morata wasted his only big chance of another disappointing afternoon when his shot on the turn was too weak to beat his Spanish international team-mate in the United goal.

Anthony Martial had been largely anonymous before the break, but, in contrast to Morata, took his chances when they came in the second period.

Kepa Arrizabalaga parried Mata’s initial effort, but with Alonso down injured in the Chelsea box, Martial had time to control Ashley Young’s driven cross back into the area before firing home to equalise.

Martial again provided the final flourish with a brilliant curled effort into the far corner 17 minutes from time after fine work in the build-up by Mata and Rashford.

The Frenchman was greeted with a bear hug from Mourinho when he was replaced six minutes from time.

But United couldn’t hold out for an extra six minutes stoppage time as Barkley pounced after De Gea had produced another miraculous save from Rudiger before carnage broke loose on the touchline.

The draw means Chelsea move to the top of the table with 21 points, whilst United stay eighth on 14.

A disappointed Mourinho said: “If you say before the match, one point at Stamford Bridge is always a good result because it’s so difficult here, but if you look at the end of the game it was a terrible result for us and a phenomenal result for them”

Ross Barkley, Chelsea goal hero said: “My confidence is growing. Our target was to get three points but to stick in and get the draw shows a great attitude. We conceded a goal that we should have stopped but we came back and showed a good attitude”

Pele Collapses After A Dangerous Exhaustion