Former governor of the State of Osun, Ogbeni Rauf Aregbesola Monday got a rousing welcome in the senate chambers as he reeled out his achievement as governor in the land of the virtue. Aregbesola who started by recognising the leadership of the senate, senators from Osun, former progressive governors in the senate, as well as…”
Yusuf
featured hero Politics 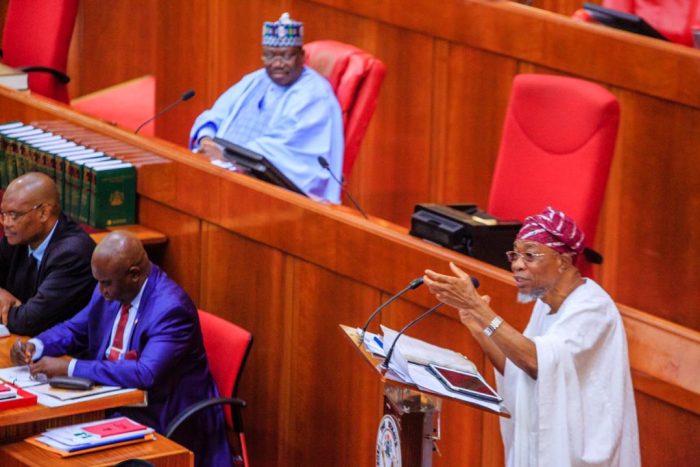 Former governor of the State of Osun, Ogbeni Rauf Aregbesola Monday got a rousing welcome in the senate chambers as he reeled out his achievement as governor in the land of the virtue.
Aregbesola who started by recognising the leadership of the senate, senators from Osun, former progressive governors in the senate, as well as party leaders in the South West stated that his past 39 years post academic experience had prepared him for a life of service.
“The past 39 years of post qualification experience in professional, leadership, and resilience with a huge dose of politics has prepared me for a life of service. I believe that power is responsibility and should be used for the welfare of the people.”
He further went ahead to reel out the achievement of his administration saying, “the United Nations Development Program, UNDP and the National Bureau of Statistics, NBS Human Development Index Report released in October 2018 shows that as at October 2010, Osun Poverty Index was 37.5%, but by 2016, Osun’s Poverty Index had crashed to 17.5%, the lowest in the country.
“Out of school Children reduced from 12.8% in 2011 to 10.5% in 2016 according to the UNICEF Multiple Indication Cluster Survey, 2016/2017. According to the NBS report on JAMB Admissions, in the last 7 years, Osun has ranked top 3.”
On security, the former governor says Osun recorded 0.94 crime incidence rate, being the lowest in the South West of the country. Ogbeni Rauf Aregbesola also used the opportunity to explain to the senate how his administration was able to weather the financial crisis that ravaged the nation which did not leave out his state.
“I must hasten to add that I and my administration faced lots of criticisms while in government, partly due to ignorance and partly due to mischief. One interesting topic of misrepresentation is salary 7 pensions payment. Yet, while many states were unable to pay a penny to workers for many months, it was never so in Osun. “What we did was to devise a method of modulated salary & pensions payment by which the most vulnerable workers earned their full pay. This applied to workers on Levels 1-7, who accounted for about 72% of the workforce. Those on Levels 8-12 earned 75% of their salary & pensions, while only those on Levels 13-17 earned 50%.
“I am happy to say that from July 2018, we commenced the payment of full salaries & pension to all workers before I left office and the practice continues till today. In 8 years, We received a total gross allocation plus IGR of N332,928,683,766.46, of which we paid Salaries, Pensions & Gratuities worth   N209,375,950,193.71 representing  62.9% of our total earnings on personnel cost alone.” The former governor stated.
Responding, former governor of Imo and Senator Representing Imo South, Sen. Rochas Okorocha eulogised the nominee, describing him as a man who used power for the good of the people.
In the same vein, Sen. Elisha Ishaku Abbo representing Adamawa North of the PDP gave a touching story of how Ogbeni had supported him in the past when he wanted to contest as chairman of his local government without knowing him from anywhere. He therefore asked his colleagues to allow him bow and go whilst also imploring the president to give him a ‘big ministry’.
Two APC senators from Osun, Sen. Surajudeen Ajibola Basri and Sen. Oriolowo Aderele Adeyemi Oriolowo spoke glowingly of the nominees describing him as their leader, an achiever, a mentor and benefactor and should be allowed to ‘bow and go’. Meanwhile, the senator representing the nominee, Sen. Francis Fadahunsi, PDP Osun East seconded the motion as moved by the Senate Minority Leader, Sen. Enyinnaya Abaribe, PDP Abia South for the nominee to ‘bow and go’.
Meanwhile, earlier during the screening of a ministerial nominee from Lagos, Mr. Babatunde Raji Fashola, a former governor in Imo, Sen. Rochas Okoracha suggested that the presidency unbundles the Federal Ministry of Power, Works & Housing to allow for effectiveness and efficiency in the provisions of essential services to the populace.

Why Religion Is Number One Problem For Nigerians: Wole Soyinka