………….. Fashola, Ambode, Amaechi, Tonye Cole, Akpabio, Adelabu, Akume under consideration As the nation awaits President Muhammadu Buhari’s ministerial nominees to help him shepherd his second term, there is anxiety and uncertainty amid endless closed-door meetings by leaders of the All Progressives Congress (APC), as to who will make the list. The president’s silence on…”
Yusuf
featured hero Politics 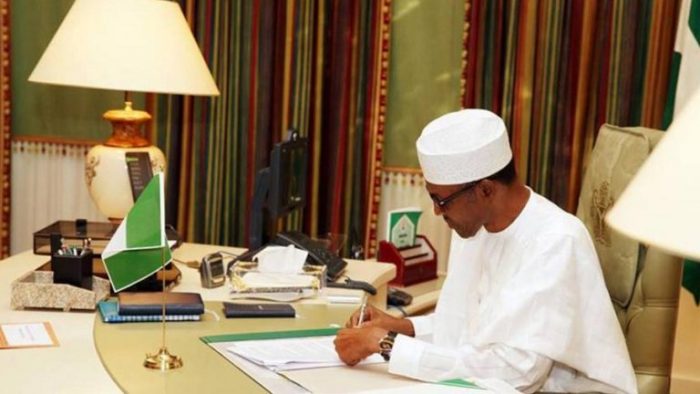 As the nation awaits President Muhammadu Buhari’s ministerial nominees to help him shepherd his second term, there is anxiety and uncertainty amid endless closed-door meetings by leaders of the All Progressives Congress (APC), as to who will make the list.

The president’s silence on the issue has ratcheted expectations and fears amongst hopefuls.

The battle for ministerial appointments has peaked significantly in the last few weeks even as Buhari is said to be preparing a final list of those he wants in his cabinet due for announcement anytime soon.

The battle to make the Next Level cabinet has been made particularly competitive, because of former ministers, who are itching to return to cabinet, former governors who have either completed their two terms in office or those who lost re-election bid or lost the ticket to other candidates and other members of the APC, who feel a need to be compensated for their roles in the victory of the president in the just concluded 2019 presidential election which earned him a second term.

Although unlike the 2015 approach, insiders have hinted that apart from selecting candidates each from the 36 states and the Federal Capital Territory (FCT), the president has also decided to appoint another six to represent each of the geo-political zones in order to actualise his promise of inclusive government.

Unfortunately for a majority of party leaders, the president has kept the information about his Next Level cabinet to himself alone, the very reason the APC governors after a meeting last week conceded the choice of cabinet members as entirely the president’s prerogative.

To that extent, the silence of the president and the obvious lack of clue on who might get what from other Villa sources have further stiffened the jostle for appointments, even as the nation is on tenterhooks about those that would make the cabinet.

In Osun, the race according to party members is non negotiable for the immediate past Governor of the state, Ogbeni Rauf Aregbesola. Although, the former minister of health, Prof Isaac Adewole is believed to be interested in the position and favoured by some section loyal to Governor Gboyega Oyetola, many believe the minister’s inactiveness in the state’s politics might cost him.

Aregbesola, on the other hand is seen as a rallying point for the party as feelers within the Osun APC indicate that he is still in control of party affairs evident in the recent selection of the principal officers of the State House of Assembly.

In Lagos State for example, while the appointment is strictly between two former governors, Mr. Babatunde Raji Fashola and Akinwunmi Ambode, there is the understanding that, while Fashola, who was Minister of Power, Works and Housing may return representing the Lagos slot, Ambode is being considered for the South West slot.

The situation in Rivers State is still believed to favour former Minister of Transportation, Mr. Rotimi Amaechi. But there are those who feel the governorship candidate of the party, Mr. Tonye Cole, who was denied the opportunity of challenging Governor Nyesom Wike of the Peoples Democratic Party (PDP) by different courts, is also being considered for a ministerial appointment. How to balance the two interests is what many do not however know.

The slot for Delta State is a straight slugfest between former Minister of State for Petroleum Resources, Dr. Ibe Kachikwu and the President’s Campaign’s spokesperson for the 2019 election, Mr. Festus Keyamo, SAN. Kachikwu is itching for a return while Keyamo feels he did well fending off the President’s opponents without apologies and as such deserves a cabinet shot.

In Ogun State, the choice of candidate is Wale Edun, Pastor Tunde Bakare and one Mr. Kayode Odesola. But neither of the last two candidates is believed to have sweeping support of stakeholders in the state. They are however in the good books of the president.

The choice between Mr. Adebayo Adelabu and former Oyo State Governor, Abiola Ajimobi makes the battle for the state a tough one. Adelabu is said to be eyeing Ministry of Finance. And further compounding this is the fact that the former Minister of Communications, Adebayo Shittu is also in contention for the slot from the state. But Buhari might have made his choice already.

Alhaji Lai Mohammed is believed to be itching to come back as the Kwara State candidate for a ministerial post, but he does not appear to have the much needed support from home, as a majority of the people feel, the opportunity should go to other parts of the state for balancing.

Former Governor George Akume of Benue State and the immediate past Minister of Agriculture, Chief Audu Ogbeh are the two candidates for the Benue slot. Not only are the both of them qualified, they both also worked for Buhari’s re-election. The stakes are therefore high in Benue.

Currently, the Kano slot appears a solo run for the former Minister of Interior, Abdulrahman Danbazau, except the president changes his mind, which many believed is unlikely.

Former Minister of State for Aviation, Hadi Sirika and Senator Abu Ibrahim are the two top guns for the Katsina slot.
While many believed that Sirika might return, there are those who believe the Senator is in Buhari’s serious consideration.

Between the former Minister of State for Power, Works and Housing, Mustapha Baba-Shehuri and former Borno State Governor, Kashim Shettima, the slot for a ministerial slot would be settled for the North East state.

Although now a senator, it is common knowledge that Shettima desires to be in Buhari’s cabinet, a situation that makes the choice for Borno also competitive.

The battle for the ministerial choice in Kaduna State presents a rather interesting twist. While the name of Senator Shehu Sani, who fell out with Governor Nasir el-Rufai ahead of the 2019 election has been flying around, one Barnabas Bala Bantex has also come up strong in the equation. It is another competitive turf for the former senator.

Ebonyi State has before it, its 2019 governorship candidate, Senator Sunny Ogbuorji and the immediate past Minister of Science and Technology, Ogbonnaya Onu.

Apart from this being an APC affair, there is also the belief that the governor of the state, Dave Umahi might play a very serious role in the eventual choice for the state, because of his relationship with Buhari and APC.

To slug it out in Bauchi are the immediate past governor of the state, Mohammed Abdullahi Abubakar and former Minister of Education, Adamu Adamu, one of the closest allies of the president. The choice here is also a tricky one, which makes a pick somewhat difficult.

The trio of Godswill Akpabio, Nsima Ekere and Udo Udoma are to battle for the Akwa Ibom slot. While Udoma is the former Minister of Budget and Planning, Ekere flew the APC flag as its governorship candidate and lost, same as Akpabio, who could not return to the senate. The battle for the slot here is considered a serious and tough one, because it is more about political relevance.

Although there is the belief that President Buhari might drop his former Minister of Justice and Attorney General of the Federation, Abubakar Malami, he appears the only candidate for the slot for Kebbi State. He is itching to return. Nothing is however cast in stone as far as his consideration is concerned.

For the Sokoto State slot, the battle is currently being described as one between Aisha Abubakar, former Minister of State for Trade and investment and the APC candidate in the just concluded governorship election, Ahmed Aliyu.
Although Aisha’s appointment created some upset initially, when she was picked in 2015, it is unlikely Buhari might want to go through another pressure for her.

Former Adamawa State governor, Mohammad Bindow Jibrilla appears comfortable as the most plausible candidate from the state, having lost his election in March this year.

Also in Taraba, Fatima Gambo is said to being positioned as the ideal replacement for Aisha Al-Hassan, the former Minister of Women Affairs, who openly declared support for Alhaji Atiku Abubakar, the PDP presidential candidate, even while still serving in Buhari’s cabinet.