The Minister of Power, Works and Housing, Babatunde Raji Fashola, has insisted that the challenges facing the power sector is not technical but manmade. Nigeria’s energy crises have persisted despite series of assurances by the Federal Government that the power challenges will be given maximum attention and treated with despatch. But two years down the…”
Yusuf
News 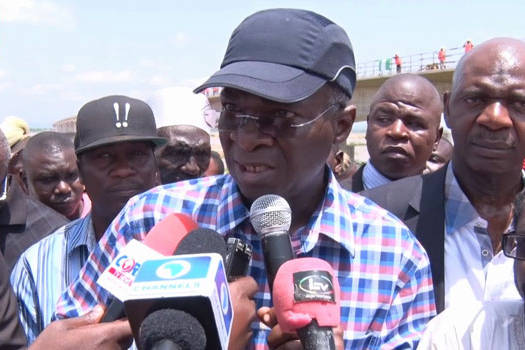 The Minister of Power, Works and Housing, Babatunde Raji Fashola, has insisted that the challenges facing the power sector is not technical but manmade.

Nigeria’s energy crises have persisted despite series of assurances by the Federal Government that the power challenges will be given maximum attention and treated with despatch.

But two years down the line, not much had changed, and in some instances, the situation had gone from bad to worse, with energy costs accounting for the highest spend for homes and businesses as Nigerians rely on alternative sources to get by.

Besides, Fashola has faced a series of backlashes for failing to fix power following his past boasting that this could be achieved within months.
But speaking at a dinner organised by the Petroleum Club in Lagos last week, he clarified, “some people have said because I am not an engineer is the reason for continued power instability. But many people have served before me that are engineers and the challenges in power are still there, though I acknowledge their efforts.

“Most of the problems in the sector are not engineering but manmade. For instance, we have a situation where close to 900 containers that have switches, feeders, control units meant for the power plants are trapped in our own ports for almost a decade. During this administration, we have now received 387 containers in one year that could not be retrieved in a decade, and we have started moving them to different power stations in the country.”

He added that power has also improved under the Buhari’s administration. According to him, “two years ago, that is May 29th when this administration came to power, Nigeria was generating 2,690 megawatts (mw), but by May 29th this year, power generation is now 4,014mw. What we did is that from the onset, we set a road map that will take us to more incremental energy.”

Speaking further, he said: “The years we were getting 2690mw and perhaps less, this economy was growing. But at a time when we are generating 4,014mw, we are in recession. It shows we were growing but not developing. India, for instance, relies on self-generating power in their industrial sector, and they are manufacturing and exporting. India is advertising Made in India because they have developed the capacity to manufacture. So we have to look in the mirror.”

He continued, “The problem is also a value chain; you don’t solve one and leave the other. If Nigerians understand the situation on the ground, they will be more considerate in their assessment and work with us to get there.”
Fashola identified some other issues affecting the sector to include liquidity, debts, supply of gas etc, adding that most of the rich do not pay for the power they consume.

He also said that government is also providing independent power to 37 universities and seven teaching hospitals, while the Rural Electrification Agency would assist in the provision of power in the rural areas.

In his opening remark, Chairman, The Petroleum Club, Lagos Godswill Ihetu, noted that issues and challenges relating to the power sector are among the commanding heights of the economy.

“We Shall Meet your Demand Soonest”, Osun Tells NMA

FRSC To check All Forms Of Overloading Of Vehicles