May Accuses Putin Of Election Meddling

In the strongest attack ever launched on Russia by her administration, Theresa May has accused Moscow of meddling in elections and carrying out cyber espionage. Addressing leading business figures at a banquet in London, the prime minister said Vladimir Putin’s government was trying to “undermine free societies”. Mrs May said it was “planting fake stories”…”
Editor
News World News 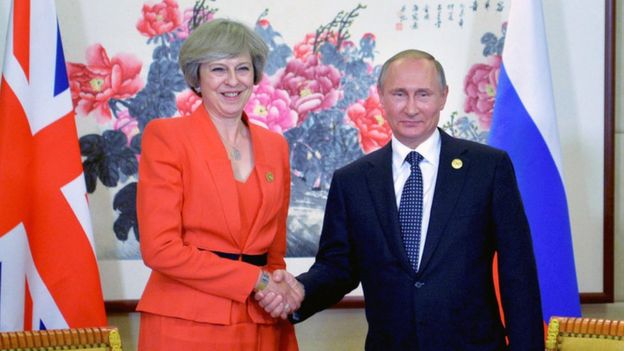 In the strongest attack ever launched on Russia by her administration, Theresa May has accused Moscow of meddling in elections and carrying out cyber espionage.

Mrs May said it was “planting fake stories” to “sow discord in the West”.

But, she added, whilst the UK did not want “perpetual confrontation” with Russia, it would protect its interests.

BBC reports that her comments are in stark contrast to those of US President Donald Trump, who last week said he believed President Putin’s denial of intervening in the 2016 presidential election.

Foreign Secretary Boris Johnson is due to visit Russia next month.

In a major foreign policy speech at the Lord Mayor’s Banquet at London’s Guildhall, which Mrs May described as a “very simple message” for President Putin, she said he must choose a very “different path” from the one that in recent years had seen Moscow annex Crimea, foment conflict in Ukraine and launch cyber attacks on governments and Parliaments across Europe.

Russia could be a valuable partner of the West but only if it “plays by the rules”, she argued.

“Russia has repeatedly violated the national airspace of several European countries and mounted a sustained campaign of cyber espionage and disruption.

“This has included meddling in elections and hacking the Danish Ministry of Defence and the Bundestag among many others.”

Man Shot In The Head While Live On Facebook