Mariam Sanda Reveals What Lead To The Argument With Her Husband 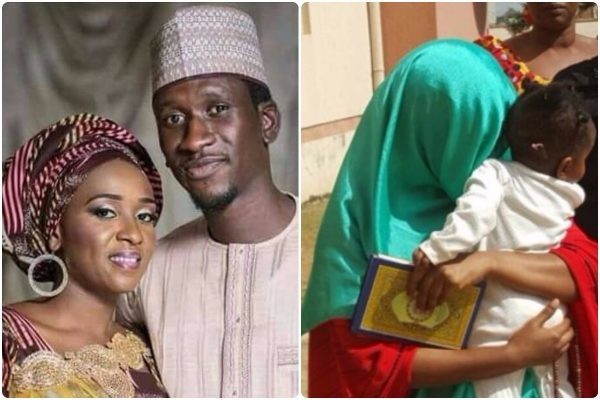 Maryam Sanda, who was charged with the murder of her husband, Bilyaminu Bello, in Abuja in November 2017, has finally revealed to the police the reason for her actions.

According to her statement, that the nude photos of a female she found on her late husband, Bilyaminu Bello’s phone led to their fight which sadly led to his death.

Maryam allegedly stabbed her husband, Bilyamin Bello, in the chest, neck and genital area, over alleged infidelity. He later died from his injuries.

At the resumed hearing of the case yesterday January 22nd, a police officer involved in the investigation of Bilyaminu’s death, Josephine Onyinyedu, told the court that Maryam in her statement which was tendered in court as exhibit, stated that she saw the nude photos a lady had sent to her husband on November 20th and that when she challenged him, it led into a fight.

The police prosecutor told the court that Maryam in her statement, said during the fight in their Maitama residence, Bello who is the son of former PDP chairman, Haliru Bello, had slipped on a wet floor and then fell over a broken shisha pot. She added that she drove husband to the General Hospital in Maitama where he was pronounced dead on arrival.

At the trial, the prosecuting counsel attempted to present to the court a medical report from the hospital where Maryam had rushed Bello to on the day of the incident. However, the defence counsel objected to this,insisting that it must be the doctor that released the medical report that must present the report him/herself to the court.

The case was then adjourned to February 27th for continuation of trial.

Various Voices On Sales Of Properties