The Management of Moshood Abiola Polytechnic, Abeokuta has locked out members of the National Executive of the Academic Staff Union of Polytechnics, ASUP, in Nigeria from the school premises. This is coming after the declaration of indefinite strike action by the Academic Staff Union of the institution. The National Executive Council of ASUP which scheduled…”
Editor
News 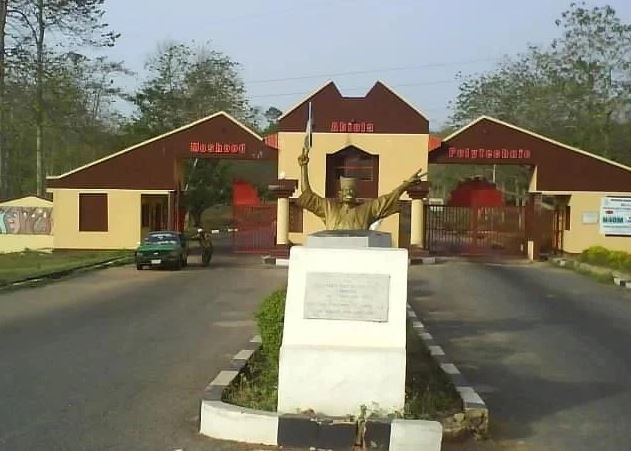 The National Executive Council of ASUP which scheduled its press conference in the school on the “Deplorable condition of polytechnic education in Nigeria” had to hold the conference at the school gate.

Speaking to reporters, the Union’s zonal coordinator, Olawale Omobaorun said, “They say we are not going to enter, and we are trying to tow the line of peace, we will stay at the gate and address the press.”

He alleged that the state governor was after the Chairman of the MAPOLY Chapter of ASUP, Comrade Kola Abiola. He added, “The government of the state is after our chairman and that is why you are not seeing the chairman here today.

“Let the world know that the life of Com. Kola Abiola is in threat. If anything happens we will be ready to face the government.”

Also speaking, the ASUP President, Malam Usman Dutse lamented the sorry state of polytechnic education all over the country.

The statement, which was read by the Vice President, Timothy Ogunseye, said, “If well harnessed will boost Nigeria’s technological know-how, improve ICT, create millions of employment opportunities and raise the level of both theoretical and practical technological literacy.

The Union said governments at all levels had keyed to annihilation of the Polytechnic sector, which “feeds and caters for millions of youths and families. It cited some issues facing the sector, which include, “Sorry state of State-owned institutions; victimization of Union officers; withdrawal of allowances; among others.

“Polytechnics and monotechnics belonging to state governments have continued to wallow in deplorable conditions.

“Chapter chairmen in various polytechnics in the country have been sacked in glaring cases of victimization while there has been no intervention.”

The Union also decried what it called “Infractions in the appointment of Rectors”, citing MAPOLY as an example. It said MAPOLY can “boast of about 30 chief lecturers with fifty seven Ph.D holders”

Allow My Son To Succeed Me, Queen Elizabeth Pleads With Commonwealth Leaders