The outbreak of the dreaded Coronavirus, a.k.a. COVID – 19 has compelled concerned authorities and stakeholders in the education sector to seek out suitable alternatives to physical school environment. These school-away-from-school situations vary widely. NIYI OLASINDE however brings out the best in Opon Imo (Tablet of Knowledge), an initiative introduced in the State of…”
Yusuf
featured Op-Ed 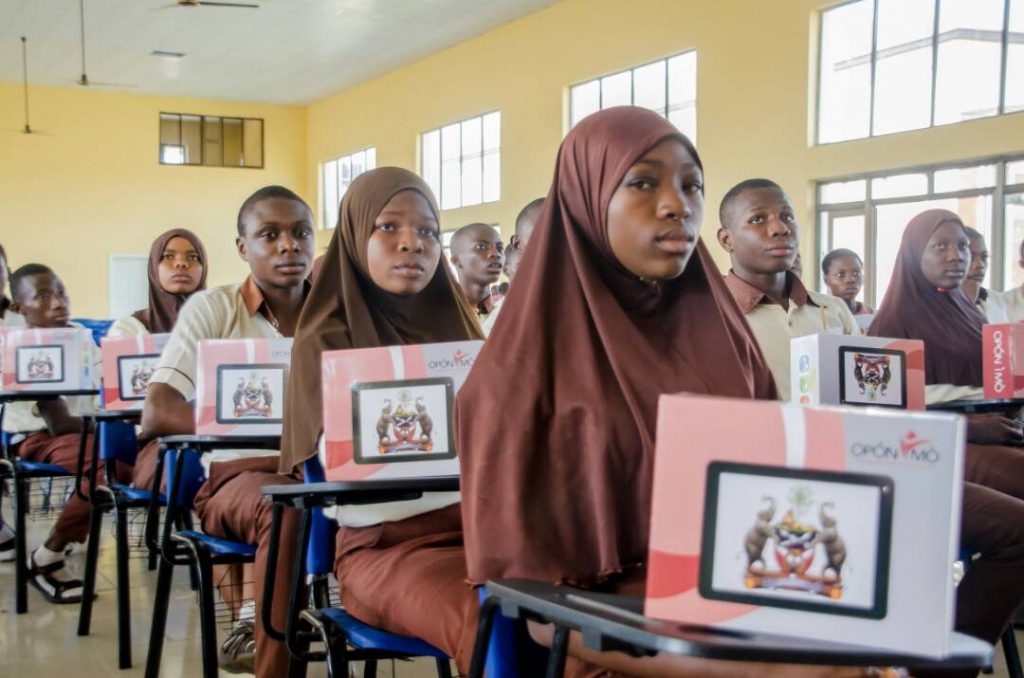 The outbreak of the dreaded Coronavirus, a.k.a. COVID – 19 has compelled concerned authorities and stakeholders in the education sector to seek out suitable alternatives to physical school environment. These school-away-from-school situations vary widely. NIYI OLASINDE however brings out the best in Opon Imo (Tablet of Knowledge), an initiative introduced in the State of Osun about seven years ago. Its relevance and appropriateness in the face of prevailing apparently indefinite closedown of schools, colleges and educational institutions are its outstanding strength.

These periods are trying times indeed! Virtually all sectors of the economies of nations are shut down. The dread, and the spread (actual or anticipated) of the Coronavirus have forced upon us a closure of all public places and places of large human contact. In this connection, schools are not spared; as pupils and students have to stay at home as wise measure to halt the ravaging spread of the dreaded and debilitating virus.

Prior to the shutdown of schools, elementary, middle and high schools in Nigeria, the State of Osun inclusive had almost reached the second half of the Second Term for 2019 / 2020 Academic Session. What this implies is that a particular category of students, those at the Certificate Year in the high schools were already dreaming how the external examinations would deal them in this year’s outings. With the exclusion of the Joint Admissions and Matriculation Board’s Unified Tertiary Matriculation Examination, which escaped the lockdown of schools by the whiskers, others caught the bait – hook, line and sinker. This appears a horrible tragedy, especially for an education system that had been tempest-tossed by myriads of challenges, prior to the compulsory long, indefinite vacation. What then is the way out for these young Nigerians who we all agree are the hope for the present and the future?

Since this sad trend engulfed our land, several measures have been adapted to cope with the situation and mitigate the attendant losses so that the lost grounds in classroom instruction would not be too enormous. Thriving nowadays, since physical learning in groups is forbidden are in-vivo situations, consisting of learning through virtual devices, radio and television classes, online instructions through the Facebook, Website and other e-learning devices. Well and good. But the sterling question is: are these adaptations equal to the task of feeding recipients with enriched instructions such as could make them fly out in bright colours in the examinations they will be tackling anytime soon? Of particular worth of mention are the school certificate rounds of examinations organized by the West African Examinations Council (WAEC) and the National Examinations Council (NECO). Could these improvised means of instruction mentioned above be adequate and sufficient to take our registered candidates to the much-desired Promised Land?

THERE has never been a time when the education intervention initiatives of Ogbeni Aregbesola in the State of Osun has earned its inbuilt vindication more than now! Aside the vindication his diverse policies has got – in schools’ reclassification and structural overhaul; in the care of the old, aged and indigent and other social welfare intervention initiatives; in the brokering of peace between farmers and herders and between all forms of invading foreigners and indigenes; all indications place Rauf Revolution in the State of Osun far ahead with an undiluted air of superiority. Rauf is a leader with foresight, farsight and, no doubt, benefit of hindsight. The Opon Imo (Tablet of Knowledge) is so apt and relevant to our current situation that it can no longer be argued away as waste as some critics and naysayers did in the past.

The Opon Imo initiative came at appropriate time to demystify school learning and make public school learning more attractive; thereby restoring its old-lost glory, honour, sanctity and rectitude. As things stood, before now, it is no longer a dreadful event to send a child to our public schools. On top of these attractive packages paraded by the free, qualitative and functional education introduced to the state, a good proportion of parents who had been made victims of coughing out enormous hard-earned resources in order to get their wards educated in private schools; or rather who could scarcely afford that costly facility for their wards have since been afforded the rare privilege of good education free-of-charge, courtesy of the quintessential leader of our time, Ogbeni Aregbesola.

Through the introduction of Opon Imo, the burden of spending enormously on textbooks, either by parents or government, has been relieved. We remember with nostalgia the old good eras of free education as introduced and successfully operated in the defunct Western Region by the late sage, Chief Obafemi Awolowo, the premier of the Region. The same feat was replicated during the Second Republic with late Chief Bola Ige at the helm of affairs as Governor of the old Oyo State. We also remember the good efforts of Chief Bisi Akande in his days as Governor of the present-day State of Osun.

During the entire period under reference, tuition, textbooks and notebooks were entirely free! The free education scheme afforded many school children especially those from humble socio-economic background the opportunity of access to quality, functional education. By the standards of those periods, school children were provided with textbooks and notebooks free of charge. But the standards of the current time place the demand on government to find another device which can present volumes of books of different sizes in a very light, easy-to-access gadget, which an average learner can carry about with much ease and which can provide learning anywhere and anytime without the burden of carrying bulky bags around.

Another advantage of the Opon Imo is that it saves the government the horrendous burden of procuring sets of books perennially. The economic benefits of providing easier alternative consist in saving enormous costs for the state which can be expended on other viable life-changing programmes and projects. Aregbesola, during the launch on June 3, 2013, envisioned that over a period of ten years, the devise would save government a whooping sum of about N50.25 billion; were the state to engage in the physical purchase of hard copies of textbooks for the 17 subjects taught in our public schools, hard copies of 51 audio tutorials, hard copies of JAMB and WAEC past questions and answers and the rest.

Aside these, the Opon Imo device can be solar-powered. It also has the capacity to record audio lessons, thus saving students the trouble of copying notes. It also spares them more time to learn.

Another benefit confirmed for the device is that it facilitates the free education programme of the progressives through its cost-saving nature. We would all agree that a truly qualitative and functional free education programme is usually a crowd-puller. The populist nature of such programme therefore would require its provider to find means of making learning easier, fast and all-reaching within a limited space of time.

The device is a tool focused on the making of the total student – so the preparation of conducive learning environment, which consists in the construction of befitting classrooms and equipping such with good furniture, were just a tip of the iceberg.  Other emerging benefits have appeared on the horizons now that physical schools’ situations have been sacked by the exigencies of a ravaging pandemic.

It was well-reasoned from its inception that since textbooks are made from wood which is obtained from forests cultivated on wide expanses of land; the introduction of a devise like Opon Imo, which reduces the dependence on books, will help in the conservation of our forest resources, hence reducing risks associated with environmental degradation. It was also observed that since a student must have been exposed to textbooks from kindergarten, offering him something different at his high school age would do him much benefit. In other words, he should be offered with the kind of learning that brings him in conformity with his colleagues and counterparts in the present world order through exposure to digital-based instruction that makes him ICT-compliant. This vision is now standing the state and its teeming students in better stead!

Opon Imo devise is a first of its kind standalone learning tablet in the world for self-paced study. It provides three major content categories vis-à-vis e-library virtual classroom, and an integrated test zone. The virtual classroom category contains 63 e-books, covering 17 academic subjects for examinations conducted by WAEC, NECO and JAMB as well as non-academic life-enriching subjects such as History of the Yoruba, Sexuality Education, Civic Education, Ifa on Ethics and Morals, Enterprise Education, hints and tips on passing SSCE and How to Live a Healthy and Happy Life. This section also contains an average of 16 chapters per subject and 823 chapters in all, with about 900 minutes or 15 hours of audio voiceovers.

In the integrated net zone of the devise, there are more than 40,000 JAMB and WAEC practice questions and answers dating back to about 20 years. It also contains mock tests in more than 51 subject areas, which approximates to 1,220 chapters, with roughly 29,000 questions, referencing about 825 images. Opo Imo is a living device, as such it has constantly been reviewed, revised and upgraded to accommodate new trends as situations demanded since its first introduction.

The tablet is, in design, use and purpose more than a learning devise. It is a revolution that individualizes learning and brings the school to the child. As postulated by Aregbesola during the launch, in the old order, the pupils went to school to study, but that with Opon Imo, they henceforth learn! We now know better that with such devices as this, the student’s home has been fortified as school-away-from-school!

With Opon Imo, learning has been individualized and democratized. We have long been enamoured with the requisite tool to fight the pandemic that had not yet broken out. Kudos to Ogbeni Aregbesola for fashioning out such an awesome problem-solving apparatus!

Osun Development Plan: Setting The Path For A Prosperous Future