Lira crash by US is a Political Plot – Erdogan

President Recep Tayyip Erdogan on Sunday said the crash of the Turkish lira, sparked by a bitter dispute with the United States, was a “political plot” against Turkey and warned Ankara would now seek new markets and partners. The dispute between the two NATO allies — which reached new intensity over the detention of an…”
Editor
World News 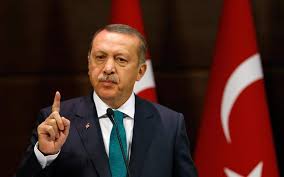 President Recep Tayyip Erdogan on Sunday said the crash of the Turkish lira, sparked by a bitter dispute with the United States, was a “political plot” against Turkey and warned Ankara would now seek new markets and partners.

The dispute between the two NATO allies — which reached new intensity over the detention of an American pastor in Turkey — has hammered the lira and also raised questions over the future partnership between Washington and Ankara.

The already embattled Turkish lira tumbled some 16 percent to new record lows against the dollar on Friday as US President Donald Trump said he had doubled steel and aluminium tariffs on Turkey.

All eyes will be on the lira when foreign exchange markets reopen on Monday after the weekend pause. But Erdogan indicated he was in no mood to offer concessions to the United States, or financial markets.

“The aim of the operation is to make Turkey surrender in all areas, from finance to politics,” Erdogan told ruling party members in the Black Sea city of Trabzon.

“We are once again facing a political, underhand plot. With God’s permission we will overcome this,” he added.

Erdogan appeared unworried by the punitive measures imposed by the US, saying Turkey could turn to other partners and again terming the crisis an “economic war”.

“We will give our answer, by shifting to new markets, new partnerships and new alliances, to the one who waged an economic war against the entire world and also included our country,” Erdogan said.

“Some close the doors and some others open new ones,” added Erdogan, who has built closer ties over the last years with countries from Latin America, Africa to Asia.

Erdogan appeared to indicate that the entire alliance between Turkey — which joined NATO in 1952 with strong American backing — and Washington was at stake.

“We can only say ‘good-bye’ to anyone who sacrifices its strategic partnership and a half century alliance with a country of 81 million for the sake of relations with terror groups,” he said.

“You dare to sacrifice 81-million Turkey for a priest who is linked to terror groups?”

American pastor Andrew Brunson has been held since October 2016 on charges of terror and espionage, and if convicted, could face a jail term of 35 years. Trump has described his detention as a “total disgrace” and urged Erdogan to free him immediately.

A delegation led by Turkish Deputy Foreign Minister Sedat Onal failed to secure a deal last Wednesday in talks in Washington on a number of issues including Brunson.

In Trabzon, Erdogan confirmed media reports that Washington gave Onal’s delegation a deadline for the release of Brunson.

“They tell us to release the priest by Wednesday 6:00 pm, otherwise the sanctions will begin,” said Erdogan, adding Turkey was not a country to agree to such requests.

Analysts say that while Washington’s sanctions against Ankara sparked the immediate crisis, Turkey’s economy has been risking trouble for a while due to high inflation and the weak lira.

The central bank has over the last weeks defied calls from markets for rate hikes to combat these problems, raising fears of interference from Erdogan who has repeatedly called for low interest rates.

Erdogan had on Saturday described interest rates as a “tool of exploitation”, in remarks that may not be warmly welcomed by the markets.

And the Brunson case is just one of many bones of contention between Turkey and the United States, ranging from Syria to Ankara’s increasingly cosy relationship with Moscow.

Erdogan also hit back at US authorities for convicting Mehmet Hakan Atilla, 47, deputy director general of Turkish lender Halkbank on charges of helping Iran evade US sanctions on billions of dollars of oil proceeds.

“You arrest my Halkbank general deputy director? You impose sanctions on our Halkbank … and then you expect different treatment from Turkey?” said Erdogan, in a second speech in the same city.

He said Turkey’s response was not going to be based on “reciprocity”, adding: “Those who commit a crime will pay a price.”

End Of An Era: Cuba’s Raul Castro Steps Down