Lai Mohammed opens up on cause of Herdsmen/Farmers clash

The Minister of Information and Culture, Alhaji Lai Mohammed, on Saturday appealed to all Nigerians to join forces with government to combat the menace of fake news. The minister made the appeal while speaking at the inaugural lecture of the Guild of Professional Bloggers of Nigeria (GPBN) in Lagos. The theme of the lecture was…”
Editor
News 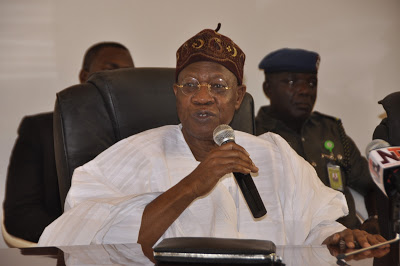 The Minister of Information and Culture, Alhaji Lai Mohammed, on Saturday appealed to all Nigerians to join forces with government to combat the menace of fake news.

The minister made the appeal while speaking at the inaugural lecture of the Guild of Professional Bloggers of Nigeria (GPBN) in Lagos.

The theme of the lecture was “Combating Fake News in the Cyberspace”.

Mohammed said the collective efforts of all Nigerians were needed in view of the threats fake news posed to peace and unity of the country.

He explained that most of the security issues confronting the country, such as herders/farmers were caused by the misrepresentation of facts in both the mainstream and social media.

The minister said the spread of fake news has also promoted ethnic and religious suspicions among Nigerians.

He said the media, especially, had a huge responsibility to check the problem in view of their strength and reach, calling on professionals to always verify their facts before sending out information.

“The media have a responsibility to verify the facts before they share, because once they share, it is always very difficult to retract.

“You see most of the issues we have about herders/farmers clashes, killings are being fuelled by fake news.

“Look at the farmers/herders’ clashes, the truth is that they are being caused largely by population explosion, climate change and pure criminality.

“So, it has nothing to do with religion or ethnicity.

“You can imagine the same water, same air and same arable land available for 45 million people at Independence are now being shared by 190 million people.

“It is like a room that can take 45 people, you now bring 190 people, you can imagine what will happen.

”So, that is the honest truth about population explosion.

“Then, the other is climate change. We read about earthquakes and flooding in different parts of the world.

”These are manifestations of climate change.

“So, how does it affect Nigeria?

”The Lake Chad that used to cover a surface area of 25,000sq km and 35 million people from six nations, including Nigeria, Cameroon and Chad depend on the water for fishing, agriculture, irrigation and so on.

”So, these 35 million people have to look for water elsewhere.

”That is why we have all these clashes.

“Of course, I must state the issue of criminality too, but we must stop presenting the issues as if it is Muslims against Christians or Hausas against Ibos. That’s not true.

“So, we should stop this narrative of Christians/Muslims or North/South.

”We are dealing with pure criminality, population explosion and climate change and that is the way we should look at it.

“If we continue to post fake news attributing different reasons to the real causes of these issues, a stage will come when Muslims will be suspicious of Christians, Christians become suspicious of Muslim for no reason.

”And that is not good for our unity,” he said.

The minister said the government was partnering different media organisations to check the problem of fake news.

He listed some of them as the News Agency of Nigeria, Nigeria Television Authority, Vanguard Newspapers and Television Continental (TVC)

Mohammed said the government was also collaborating with local and international social media platforms such as Facebook and WhatsApp to tackle the problem of fake news.

He described bloggers as critical stakeholders in the media industry in view of their number and capacity to influence others.

While stating the readiness of government to collaborate with them on the threats of fake news, the minister urged them to uphold the ethics of the profession to ensure they disseminate only credible information.

He commended GPBN for the lecture, saying the initiative would go a long way to deepen professionalism among its members.

In her lecture, Prof. Abigail Ogwezzy-Ndisika, Head, Department of Mass Communication, University of Lagos said the media was powerful because of their capacity to influence others and bring about change.

She said it was, therefore, expected of stakeholders in the industry to always uphold the ethics and report the facts.

“The fourth Estate of the Realm must never relent in its quest of being the watchdog of the society.

”This duty of the media is one that cannot be underestimated .

“In this era of social media, it behoves of the media to ensure that their platforms are not compromised, no matter the cost involved,” Ogwezzy-Ndisika added.

The don, who was the Chairman at the lecture, described fake news as a threat to the society and development.

She urged media professionals to pursue conscious efforts to ensure that the threats of fake news were checked.

As the 2019 approaches, Ogwezzy-Ndisika urged the media to always verify whatever they were putting out in order not to cause unnecessary tension before, during and after the election.

She said most of the “fakes” were disseminated through social media and online platforms.

The don advised bloggers to work at the credibility problems in the online media by ensuring whatever they were publishing had all the elements of credibility.

He said it was important for bloggers to ensure they publish truthful information always because that was the right thing to do.

Nwandu said he knew the legal consequences of sharing fake news having been arrested by police and remanded in Ikoyi Prison in 2015 for sharing a Facebook post.

He said though the charge of spreading fake news was later withdrawn from court after 18 days in prison, the episode opened his eyes to the laws against fake news and the need to verify information before sharing.

Nwandu said the association was formed to set standards for members and make sure they comply with the ethics of the profession.

“The basic idea behind GPBN is to set up a body that will set standards for the practice of blogging just like every other profession in the world,” he said.

Here’s Why You Shouldn’t Laugh At Your Husband

Appeal Court Strikes Out Lagos’ Bid To Suspend Hijab Use