The Lagos State government has said that ban on Okada will be fully effective from next week in the state. Lagos State Governor Bababjide Sanwo-Olu, stated that the first 500 of the 5,000 last mile buses proposed to replace okadas will be launched next week. Governor Sanwo-Olu made the disclosure while speaking at the…”
Olamide
News 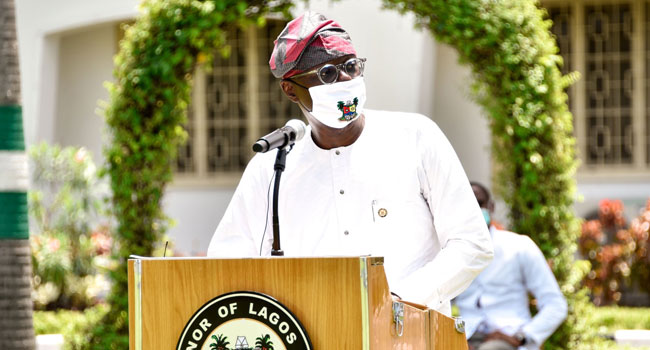 The Lagos State government has said that ban on Okada will be fully effective from next week in the state.
Lagos State Governor Bababjide Sanwo-Olu, stated that the first 500 of the 5,000 last mile buses proposed to replace okadas will be launched next week.

Governor Sanwo-Olu made the disclosure while speaking at the stakeholders’ meeting on security held at the Adeyemi Bero auditorium in Alausa, Ikeja, on Monday.

He said that clamp down on okada was part of measures to ensure security of life and property of residents.

Sanwo-Olu said there have been outcries against the okada menace, especially the lawlessness of riders and tendency to commit crime with the motorcycle.

According to him, “Nigeria’s ability to reach its full economic potential will be severely constrained in the absence of guaranteed security of lives and property in Lagos. In recent times, we have recorded a worrying trend of nefarious activities in the state; from kidnappings, armed robbery, cult clashes and violent assaults. We have tried, as a state, to respond in real time to the majority of these challenges by deploying a range of tactics from force-for-force, to carrot-and-stick to diplomacy.

“To advance our interests and objectives as a state, in the context of security, is to ensure that we contain and arrest every form of aggression and crime that threatens the development, progress and growth of the state; and by so doing improve upon the welfare and quality of life of the people.

“For us in Lagos State, there is a direct correlation between security and long-lasting economic growth and development. We cannot speak of a 21st century megacity and the vision of a Greater Lagos if we are unable to assure and guarantee the security of our citizens and their properties.

“The resultant effect of the #ENDSARS mayhem has contributed in no small way to the severely fragmented security architecture that we have today. We have risen to the arduous challenge of arresting this general state of insecurity with all the resources we have at hand. Over the last couple of weeks and months, we have instituted a number of measures designed to curb activities that engender insecurity, all with a view to secure our state.

“We have noted with dismay the fact that okada riders disregard and flout the restrictions imposed on their activities in certain areas of the metropolis. We have also observed the ongoing war between commercial motorcyclists and law enforcement agencies.

“This propensity for lawlessness is not who we are as Lagosians. The Lagos State Road Traffic Law, enacted in 2012 to safeguard the lives of people and to maintain law and order on our roads, is the legal backbone for the restrictions put in place early last year and designed to curb the okada menace.

“We banned the activities of okada and tricycle operators on key roads, highways and local government areas but, sadly, many have continued to disobey the law and, in some cases, resist enforcement by engaging in organised attacks on law enforcement agencies.

“Our mission of attaining a Greater Lagos can only be achieved when we all resolve to live in an orderly manner. Consequently, and based on all that we have seen and experienced in the past couple of weeks, as well as the increasing threats posed by the activities of commercial motorcycle operators to the safety and security of lives, we will be announcing further changes to the parameters of motorcycle and tricycle operations in the state.

“We are also excited to announce that next week, we will be launching the ‘Last Mile Buses’ that will ply inner roads and safely get passengers to their final destinations. We envisage that this initiative will also generate employment opportunities for Lagosians, including the commercial motorcyclists who will be employed as operators of the Last Mile Buses”, he stated.

The governor added that the Lagos State Residents Card will also be relaunched soon to ensure the database of residents is kept up to-date. “This database will form a critical part of our security architecture, as it will ensure that we know who is who, at any point in time,” he noted.