Salami Ganiyu of Team Oluyole on an opening day at their Lekan Salami Stadium base in Ibadan first stunned Sundman opening day in the men’s singles but failed to sustain the tempo as he lost the second set 4-6 and the final set 0-6. Christian Paul and his play with the Garden City-based side gave their…”
Yusuf
Sports 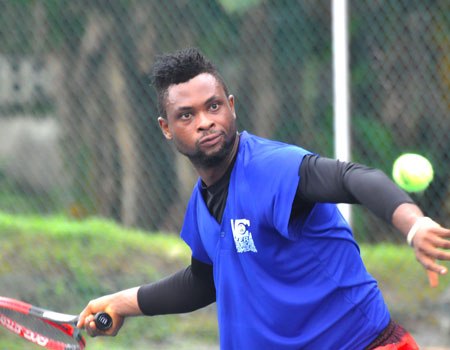 Salami Ganiyu of Team Oluyole on an opening day at their Lekan Salami Stadium base in Ibadan first stunned Sundman opening day in the men’s singles but failed to sustain the tempo as he lost the second set 4-6 and the final set 0-6.

Christian Paul and his play with the Garden City-based side gave their second victory as he outplayed Adewale Samson 6-2, 6-3 in another men’s singles, while Blessing Samuel made it a hat-trick for the visitors as she dismissed Colleen Orji 6-2, 6-2 in the ladies singles.

Team Kalotari secured the needed four points to win the fixture in the last game of the day as the pair of Emmanuel Sunday and Ikechukwu Iloputa defeated Salami Ganiyu and Kunle Bamidele 6-3, 6-4 in the men’s doubles.

The serve off of Sunday’s matches had to be delayed due to downpour but the hosts did not fare better in the remaining games, as Christian Paul, in the reverse men’s singles, beat home boy Ismaila Adesina 6-0,  6-2.

Captain of Team Oluyole, Wasiu Ibrahim, put his wealth of experience to bear on the reverse men’s singles but could not match the firepower of rising star, Sunday Emmanuel, as the game ended 6-2, 6-1.

Team Kalatori, coached by Sunday Samuel, made it 7-0 when the pair of Christian Paul and Blessing Samuel defeated the duo of Adewale Samson and Colleen Orji in the mixed doubles 6-2, 6-1.

NCC’s Deputy Director, Policy, Competitions and Economic Analysis, Alhaji Abubakar Yakubu while speaking during the matches in Ibadan, said the sponsorship of the Tennis League by NCC is to empower the youth to be meaningfully engaged.

“The primary objective of sponsoring this League is to provide a platform for young talents in tennis to be discovered and also give prominence to the establised tennis players to improve in their standard of play.

“We at NCC believe that in the near future, some of these players featuring in the NCC League would not only rule Africa, but the world at large. The sponsorship of the NCC League is part of our corporate social responsiblity and we strongly believe that it would keep our youths meaningfully engaged while some of them could also make a living through this platform.

“This is the third season and at the end of the year, we would do appraisal and see what we can do to make the programme better because there is always room for improvement,” Yakubu said.

The victory sealed the passage of Team Muller to the semi-final of the League with four points with a game left against Team Oluyole.

Playing at the National Stadium, Surulere, Lagos, Mohammed Mohammed gave the homers the first victory of the day when he pipped Onyeka Mbanu in the men’s singles 6-3, 2-6, 6-1.

Emmanuel Idoko conquered Martins Abamu 7-5, 6-1, while Ronke Akingbade made it 3-0 as she spanked Loveth Donatus in the ladies singles 6-1,

The pair of Mohammed Mohammed and rising star, Joseph Imeh runded off Saturday’s matches with 6-2, 6-2 victory over Pius Aneikan and Tobi Thomas in the men’s doubles.

The hosts completed the routing of the Lions through the duo of Mohammed Mohammed and Deborah Gbadamosi who outplayed the pair of Martins Abamu and Loveth Donatus 6-3, 6-4.

Ronaldo’s Juventus Debut To Be Streamed Live On Facebook