Former President of Nigeria, Goodluck Jonathan, on Sunday evening arrived Accra, Ghana, For Economic Community of West African States (ECOWAS) Council. Goodluck Jonathan is billed to attend a consultation and orientation workshop for the re-constitution of the ECOWAS Council of the Wise (CoW). He said, “I look forward to an engaging session with other…”
Olamide
News World News 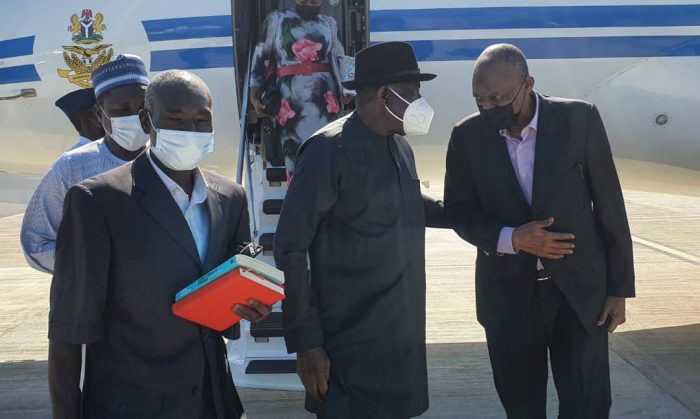 Goodluck Jonathan is billed to attend a consultation and orientation workshop for the re-constitution of the ECOWAS Council of the Wise (CoW).

He said, “I look forward to an engaging session with other distinguished members of the Council from across the sub-region.”
The two-Day workshop is scheduled to hold on the 24th of May, 2021.
It was gathered that the workshop is meant to sensitize and prepare the distinguished member states’ nominees of the CoW to discharge their duties as a supporting organ, created purposefully for Preventive Diplomacy and Mediation interventions in member states within the region.
The CoW had previously collaborated with the ECOWAS Commission in the prevention and resolution of con-flicts in some member states.
It also facilitated communication channels and confidence-building measures between conflicting parties, and also participated in fact-finding and election obser-vation missions, in conformity with the provisions of Articles 17 and 20 of the 1999 Protocol relating to the Mechanism for Conflict Prevention, Management, Resolution, Peacekeeping and Security.
The Statutes of the Council of the Wise were approved through Decision A/Dec.2/12/16 at the 50th Ordinary Session of the ECOWAS Authority of Heads of State and Government in December 2016 to further define the mandate, compositions and rules of procedures of the Council as part of the initiative to re-constitute and reposition the Council of the Wise to effectively sup-port the ECOWAS Preventive Diplomacy and Mediation efforts in the Member States.
It would be recalled that ECOWAS pioneered the establishment of CoW in Africa and its suc-cesses have been acclaimed farther afield, with a replication of similar mechanisms by the Afri-can Union Commission (AUC) and some Regional Economic Communities (RECs) and Regional Mechanisms (RMs) on the continent.

The emerging and variant socio-political tensions generated within the region reinforce the need to urgently reconstitute the CoW to assist ECOWAS in further delivering on its peace and stability mandate.

38 Nigerians Have Been Killed While Fighting For Ukraine — Russian Report