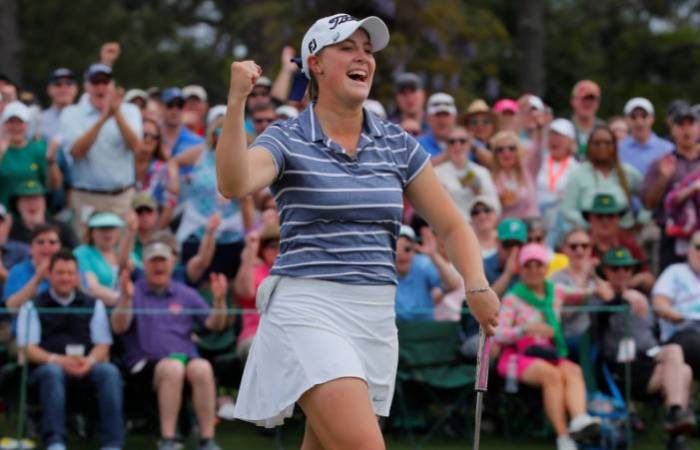 Jennifer Kupcho of the United States hits her shot on No. 3 during Round 2 of the Augusta National Women’s Amateur, Thursday, April 4, 2019.

She fired a final round five-under 67 for a four-shot win over Maria Fassi.

Following the first women’s competitive round played at Augusta National, it was a double celebration for Kupcho as she hoisted the silver and gold Tiffany-designed cup.

This was at a club that just seven years ago did not have a single woman member.

“You are now part of history of Augusta National along with all the great Masters champions who have been right here in this Butler Cabin,” Augusta National chairman Fred Ridley said as he presented Kupcho with her trophy.

It was in the same location where the Masters champion is presented with the winner’s green jacket.

With Augusta National set to host the Masters next week, Fassi and Kupcho proved that women can also produce nerve-jangling drama with a back-nine battle worthy of any major.

Kupcho’s elation was mixed with relief as she struggled with a migraine and blurred vision from the eighth through 11th holes that threatened to scuttle her title hopes.

“I actually got a migraine on the eighth green and kind of over to the left I just couldn’t see it was blurry,” said Kupcho.

“I told my caddie, ‘I’m looking for you to read the putts and tell me where to hit it and I will do my best to hit it there’.

“Amazing enough, I have gotten these migraines before so I knew the blurriness would go away and I would just have a headache.

“On the 11th tee was where it finally started to go away and I could finally see.”

The Masters is often decided on the back nine on a Sunday and that was the case for the women who played their final round on Saturday, as Kupcho played the final six holes in five under.

It was along with a brilliant eagle on the par five 13th that wiped out Fassi’s two stroke lead.

Opened for play in 1933, Augusta National became the private sanctuary for some of the world’s most powerful men.

It was almost 80 years before the club welcomed its first women members in 2012, former U.S. Secretary of State Condoleezza Rice and financier Darla Moore.

After the opening two rounds of the 54-hole tournament were held at Champions Retreat in nearby Evans, the women finally got the opportunity to step on to one of the sport’s great stages.

The first competitive round played by women at Augusta National attracted a large crowd but it was not the typical gallery seen at the Masters.

The crowd more resembled one you might find at a U.S. women’s football game with plenty of teenage girls and mothers and fathers with children in tow.

While the sight of women battling for a trophy was new for Augusta National, so were the sounds as the galleries offered encouragement with shouts of “Atta girl” and “Way to go girls”.

There were plenty of Augusta members in their iconic green jackets who mingled among the crowd cheering on the golfers, while others offered support on social media.

“So cool seeing these women live out their dreams right now,” tweeted Rory McIlroy, who will be in Augusta next week looking to complete a career grand slam.

Following a Masters tradition, the round began with ceremonial tee shots.

After American Anna Redding struck the first competitive shot, the focus shifted to Kupcho and Fassi, the two close friends and college rivals sharing an emotional hug before teeing off.

The two embraced again on the 18th green, promising more battles in the future.

“I did all I could, she played a great game. She finished really strong and I am really proud of her and I know we are going to be battling for wins in the future,” said Fassi.

“Yes we were competing against each other, but we were friends before all of that.

“Making it at Augusta National, being the first time, it is just a dream come true.”

Wilder: Joshua Chickened Out, He’s Afraid To Fight Me

PHOTOS: Super Eagles Pictured Training Ahead Of Match With Iceland