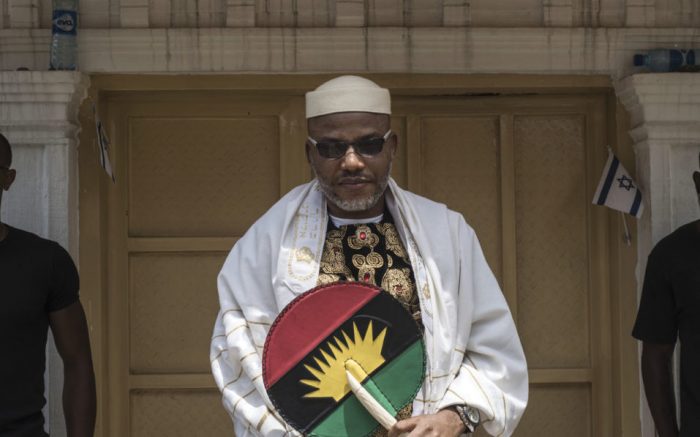 The Indigenous People of Biafra on Sunday insisted that the Federal Government knows the hiding place of its leader, Nnamdi Kanu.

It was gathered that the  IPOB has asked the Federal Government to produce the IPOB leader without further delay in order not to provoke the group to go into armed conflict with it.

In a statement on Sunday, the group’s Media and Publicity Secretary, Emma Powerful, accused President Muhammadu Buhari and some leaders in the South East of a conspiracy of silence on the issue.

The statement reads: “We are asking Maj.-Gen. Muhammadu Buhari, Nnia Nwodo and South-East governors to produce Nnamdi Kanu because they or their representatives all participated in countless meetings in Abuja and Enugu where the modus operandi of the genocidal Operation Python Dance II was agreed and ratified.

“It was as a direct result of the military invasion of the home of Mazi Nnamdi Kanu and massacre of 28 innocent unarmed civilians with many missing that has led us to once again politely ask that our leader is presented to us dead or alive.

“It is becoming clear to everybody that Muhammadu Buhari, Nnia Nwodo and South East governors are desperately trying to draw IPOB into armed confrontation and militancy to justify their genocidal clampdown on innocent people of the South-East and South-South.”