His Life & Career: Adegboyega Isiaka Oyetola was born in Iragbiji, Boripe Local Government Area of Osun State on September 29, 1954. He started his secondary education at Ifeoluwa Grammar School, Osogbo and graduated in 1972. Oyetola proceeded to the University of Lagos and graduated with a Bachelor of Science honours degree in Insurance…”
Yusuf
featured Op-Ed Osun Politics 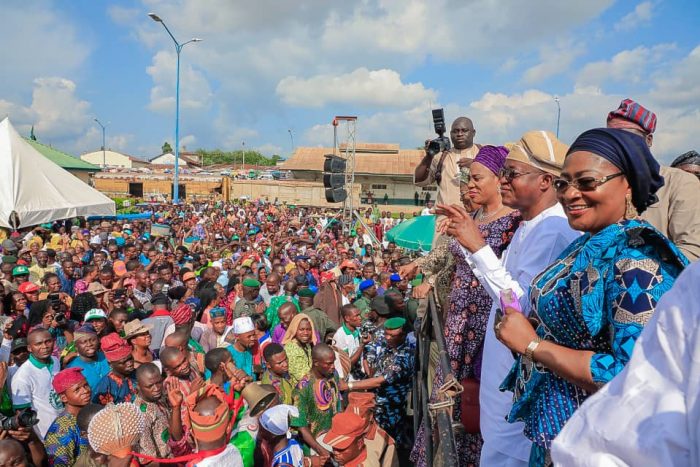 Adegboyega Isiaka Oyetola was born in Iragbiji, Boripe Local Government Area of Osun State on September 29, 1954. He started his secondary education at Ifeoluwa Grammar School, Osogbo and graduated in 1972.

Oyetola proceeded to the University of Lagos and graduated with a Bachelor of Science honours degree in Insurance in 1978. He proceeded for his mandatory one year National Youth Service Corps (NYSC) in Potiskum, the capital city of present-day Yobe State, where he lectured at the Staff Training Centre between 1978 and 1979. He obtained his Master of Business Administration (MBA) from the University of Lagos in 1990.

In 1980, Oyetola joined Leadway assurance company Limited as an area manager and worked there till 1987 when he moved on to join Crusader Insurance Company Limited as Underwriting Manager between 1987 and 1990. In 1990, he joined Alliance and General Insurance as Technical Controller and served in that capacity until 1991 when he left the organisation to start his own company, Silvertrust Insurance Brokers Limited. He was Managing Director since its founding until 2011 when he was appointed as Chief of Staff to the Osun State Governor, Rauf Aregbesola.

Before his appointment, Oyetola also had served as Executive Vice Chairman, Paragon Group of Companies between 2005 and 2011. He was also Chairman of Ebony Properties Limited. He had been a Director of Pyramid Securities Limited, until 2011, He is an Associate Member, Chartered Insurance Institute in London and Nigeria. He is also a member of the Nigerian Institute of Management [NIM]. He has several distinguish awards and recognition to his name.

Not a New Comer in Politics:
Oyetola was not a regular name in the news until his emergence as the flagbearer for Osun state governorship election. Hence, the question, who is Gboyega Oyetola?
(Chief of Staff to Aregbesola for 8 years)
Oyetola was a member of the Alliance for Democracy (AD), and has been in the party through its metamorphosis to Action Congress (AC), Action Congress of Nigeria (ACN) and now the All Progressives Congress (APC).
Unknown to many political observers outside Osun state, Oyetola has been achieving political feats without attracting attention to himself since 1997.
The politician had remained a notable figure in the political party in Osun State.
Oyetola remained in the party without contesting or seeking any position till the ACN metamorphosed to APC.

Despite being in active politics for over 20 years, Oyetola has never sought for a political office; though he served in a major position in the Aregbesola’s administration.
Until in July 2018, when he contested with several others to win the All Progressives Congress gubernatorial candidacy at the Primary election. This made him contest the September 22, 2018 gubernatorial election in Osun state and won.

Background of the Supreme Court Verdict:
The PDP candidate in the September 22 and 27 elections, Mr Adeleke, filed a petition at the election tribunal to challenge the victory of Mr Oyetola of the APC.
The main election was held on September 22 while a supplementary election was held on September 27 in seven polling units.
The electoral commission, INEC, declared Mr Oyetola winner of the election after the supplementary poll.
Mr Adeleke, who claimed he polled the highest number of votes in the election, asked the tribunal to cancel the victory of Mr Oyetola and declare him the winner of the election.
The Osun tribunal ruled in Mr Adeleke’s favour and declared him the winner of the election. In a split judgment of two to one, the tribunal ruled that INEC was wrong to have ordered a rerun election. It nullified the rerun.
The court also ruled that INEC did not comply with its guidelines on results from 17 polling units.
The tribunal then deducted the results of both parties from the declared total of votes in the affected 17 polling units.
According to the tribunal, the PDP won the election with 254,698 votes, while the APC came second with 253,452 votes.
The tribunal also said that the PDP would still have won the poll even if it had opted to validate the supplementary election.
But in a contrary opinion in May, the Court of Appeal ruled that “the tribunal was in patent error when it set aside the rerun.”
The appellate court, which had also delivered its verdict in a split decision of four to one, ruled that the judge who issued the majority decision at the tribunal, Peter Obiora, was absent on February 6, 2019, when a major discussion on the issue of non-compliance was tabled before the tribunal; and could therefore not have viewed the issue squarely.
Apparently dissatisfied, Mr Adeleke challenged the decision at the Supreme court.
In its own judgement on the 5th of July, 2019; the apex court affirmed the decision of the Court of Appeal which nullified the March 22 judgement of the Osun State election petition tribunal.
The court said the judge who had read the majority judgement at the tribunal, Peter Obiora, was evidently absent on February 6, following the documents before the court.
It said the failure of Mr Obiora to be present on that day meant that the tribunal lacked the authorities to have given any judgment on the matter.
Two of the seven members of the Supreme Court panel, however, disagreed with the majority ruling.
The Supreme Court has validated the election of Gboyega Oyetola as the governor of Osun State.
It is time to join hands with our Governor to move the State of Osun forward. Forward ever and backward never!