Justice Mary Anenih of a High Court of the Federal Capital Territory in Abuja on Tuesday ordered the remand of one Charles Eni-Umukoro in prison custody till May 19 pending the hearing of his bail application. The judge gave the order following the arraignment of the defendant, who pleaded not guilty to charges of culpable homicide…”
Editor
News 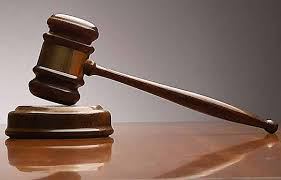 Justice Mary Anenih of a High Court of the Federal Capital Territory in Abuja on Tuesday ordered the remand of one Charles Eni-Umukoro in prison custody till May 19 pending the hearing of his bail application.

The judge gave the order following the arraignment of the defendant, who pleaded not guilty to charges of culpable homicide filed against him by the federal government.

Eni-Umukoro, a one-time Chairman of Sapele Local Government Area in Delta State, was alleged to be responsible for the death of his wife, Louisa Eni-Umukoro, who until her death was a Director at the Securities and Exchange Commission (SEC).

He pleaded not guilty to the one, count charge.
Consequently, the prosecution counsel led by Jubrin Okutepa (SAN), asked the court for an adjournment to enable him respond to the bail application of the defendant and also call his witnesses in the suit.

Responding Justice Anenih, adjourned the matter till May 19 for the hearing of the bail application.
The judge had earlier refused a request for adjournment by Godwin Emagun, counsel for the defendant, on the grounds that he failed to present a justifiable reason for adjournment.

Emagun had objected to the prosecution of the case, on the grounds that Okutepa being a private lawyer, must first obtain a fiat from the Attorney General of the Federation before prosecuting the case.
Okutepa responding, said since there was no objection from the prosecution and the plaintiff, he need not obtain any fiat. He cited various authorities to support his argument.

However, when asked to cite authorities to back his claim that Okutepa needs a fiat from the AGF, Emagun asked the court for time to do so.

Also,  attempt by Emagun to move a bail application for his client was opposed by Okutekpa on the grounds that Emagun just served him the paper a day earlier and as such, would need time to respond.
The judge then adjourned to May 19 for hearing on the bail application.

Eni-Umukoro is facing a one-count charge of culpable homicide.
He was accused of killing his wife.
The offence is punishable to death under Section 221 of the Penal Code.

According to the charge signed by Kenneth Ubanwa of the Legal/Prosecution Section of the Force Headquarters, Umukoro allegedly caused the death of the woman by “hitting her on the head which caused internal hemorrhage with the knowledge that her death would be the probable consequence.”

Attached to the charge sheet is an autopsy report from the Department of Morbid Anatomy and Histopathology of the National Hospital in Abuja which showed that the deceased died from ‘subdural hemorrhage’ resulting from two bruises on both sides of the neck, which the doctors said are products of ‘external force.’

The criminal charge followed a complaint by the deceased family, Eliab U. Ukponmwan of Oredo Local Government Area, Edo State, who cited several incidents of violence between the two which he alleged led to the death of Mrs. Eni-Umukoro on April 21, 2016.