From her perch on the wall of the Abuja High Court, the statute of the blindfolded Lady of Justice silently watched over the usual traffic of humanity that daily passed underneath her scale and sword to seek, negotiate, and dispense justice in this hallowed compound. This bright morning of March appeared to be no different…”
Yusuf
featured Op-Ed 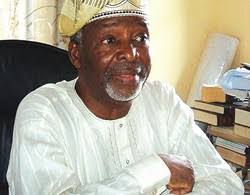 From her perch on the wall of the Abuja High Court, the statute of the blindfolded Lady of Justice silently watched over the usual traffic of humanity that daily passed underneath her scale and sword to seek, negotiate, and dispense justice in this hallowed compound.

This bright morning of March appeared to be no different from any other. But unknown to anyone, a drama would soon begin to play that would shatter the day’s routine.

All heads turned as the Black Maria roared into the court compound, screeching to a halt just after the gate. Men in prison warders uniform alighted from the front passenger side and swiftly moved to the back of the vehicle. Metal clanged against metal as they worked on the heavy locks of the iron door that soon swung open to allow the Black Maria spill its contents into the morning sun.

One by one, from the vehicle’s dark recesses, they appeared at the vehicle’s door-mouth and jumped down from the tailboard. Five men tied together by a common travail. As soon as their feet touched the ground, they all turned to face the vehicle and two of them stretched forth their hands. A smallish figure, bowed almost double, emerged, took hold of the outstretched hands and slid to the ground.

Any observant person could easily see the pain and fatigue etched on his elderly countenance. Supported by his two younger companions, the man trundled, half stooping and half dragging himself, into the courtroom.

He was apparently well known. For many of the policemen and lawyers hanging around exchanged quick questioning glances and whispers – gestures that spoke volumes. Their whispers and glances no doubt questioned the transition in this eminent man who had looked urbane the first time that he showed up in the court some weeks before. On that occasion, the grey in his beard and in his full mat of hair had glistened with reverence and dignity. Gone was that man. He was now replaced by a visibly ageing, sickly and weak caricature.

The group from the Black Maria, hedged by lawyers, spectators, journalists and security details, sauntered into the courtroom, from where the entourage fanned out into separate seats.

The lady Judge could not but notice the sharp metamorphosis in the condition of the leading figure in this nationally acclaimed case. With his discomfiture plainly visible, the man sat before her with sweat profusely oozing from his body; making his cloths to stick to his body as if with glue. Even a blind man would know this was a sick man who had no stamina for the rigours of a prolonged inquisition.

“This case is adjourned!” She abruptly announced, racking the gavel against the wooden block.
This time, the six men, sandwiched by security details, turned towards the exit.

When they got outside, the elderly figure broke away from his five co-accused and headed towards a bench where sat a lady with wide-rimmed glasses on her motherly face. His wife. Smiling up at him, she made space for him on the long low bench.

As he drew close to her, he apparently said something and the smile vanished from the woman’s face, quickly giving way to an alarmed look. He only took two more steps before he pitched forward, collapsing squarely on her laps. She let out an ear-piercing scream.

Everybody scampered in the duo’s direction. Black Maria co-passengers. Police. Warders. Photographers. Journalists. Lawyers. Well-wishers. The Prosecutor. Court officials. A medley of sympathy and curiosity. Instantly, a frenzied rescue effort began, employing water in different containers, newspapers, fans of all shades and sizes; everything went into the First-Aid attempt. Anxious moments went by.

But vanity upon vanity, nothing would resuscitate the distressed man. Finally a vehicle drove up and eager hands quickly stretchered the dying man into it.

As the vehicle fled the court premises with screaming sirens, the sympathisers stood transfixed for some uncomfortable moment, unaware that they stood under the silent Statute of Justice with its scale and sword.

One question played on everybody’s lips – will this detainee survive his ordeal; or had he become yet another casualty of Nigeria’s detention system that had seized him hale and hearty six months earlier when he heeded an innocuous invitation from the police?

That is where this story begins…

Onigegewura’s Note: What you have just read is the prologue to Dr. Frederick Fasheun’s Holiday in Hell – My Journey Through Detention. It is a chronicle of his experience when he was detained alongside the Aare Ona Kakanfo of Yorubaland, Otunba Gani Adams, and four other members of the Oodua People’s Congress in 2005.

Buhari’s State Of Emergency On Sanitation: A Eulogy To Aregbe

Is There Any Hope For Nigeria? By Bolaji Samson Aregbeshola