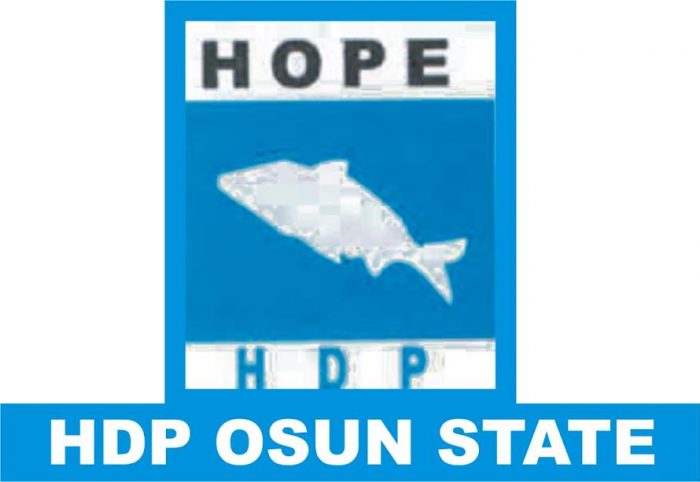 The National, South West arm and Osun State Chapter of the Hope Democratic Party (HDP) on Monday joined other eminent Nigerians to mourn the death of the first Executive Governor of the State, Senator Isiaka Adetunji Adeleke, who currently represents Osun West Senatorial District at the National Assembly.

The National Chairman of the Hope Democratic Party (HDP), Chief Ambrose Owuru through a phone call to the Osun state Chairman of his Party said: “I received with sadness and a deep feeling of great national loss, news of the recent passing away of the first Executive Governor of  Osun State, Senator Isiaka Adetunji Adeleke who also currently represents Osun West Senatorial District at the National Assembly”

“I extend my heartfelt condolences to Senator Isiaka Adeleke’s family and the current Executive Governor of the State of Osun, Ogbeni Rauf Aregbesola .’’

In his own message, the South West Zonal Chairman of HDP, Chief Kazeem Sokunbi described Senator Isiaka Adeleke as “a principled, dogged, and unrelenting politician, fully committed to any progressive and democratic course he believes in. May God give his family the fortitude to bear the loss”.

According to him “I am convinced that his death at this point in our nation building process will be missed by all. This is because his contributions not only to the development of the state of Osun but to the socio-economic and political advancement of our country have been enormous. His type is rare, his personal sacrifices and selfless services to the poor and his people uncommon. He deserves everything that the State Governor of the State of Osun can do to give him a befitting honour to immortalise his name as a great democrat and grassroots politician, ,’’ Adedoyin added.