Osun State governor, Adegboyega Oyetola, on Thursday, said the provision of good road networks is central to the agenda of his administration. He said his administration will continue to build and develop infrastructure in the state. Oyetola spoke at the commissioning of the 228.5km rural roads, rehabilitated and reconstructed under the Osun Rural Access and…”
Yusuf
featured Osun 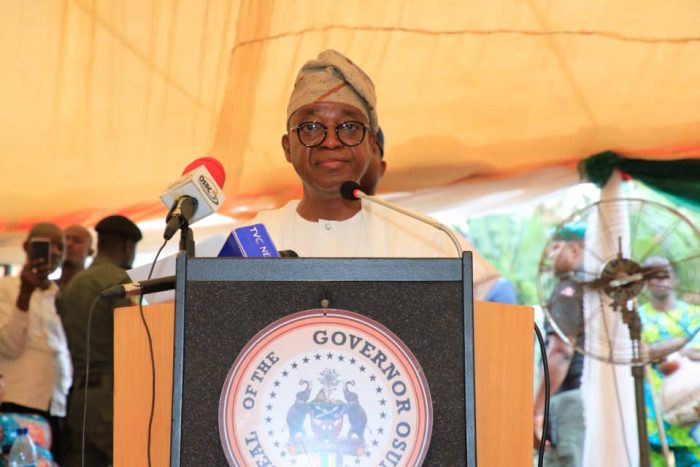 Osun State governor, Adegboyega Oyetola, on Thursday, said the provision of good road networks is central to the agenda of his administration.

He said his administration will continue to build and develop infrastructure in the state.

Oyetola spoke at the commissioning of the 228.5km rural roads, rehabilitated and reconstructed under the Osun Rural Access and Mobility Project, at Akeredolu town, along Onikoko-Osi Sooko road, Ile-Ife, Ife-South Local Government.

Governor Oyetola, who described infrastructure as the bedrock of socioeconomic development, pledged to fulfill all the electoral promises he made while seeking office.

He said, his administration would continue to breathe life into every nook and cranny of the state and ensure proper construction, rehabilitation and reconstruction of roads.

Governor Oyetola said the decision to embark on mass rural road construction was in response to the citizenry’s popular demand.

According to him, the roads were built to link rural communities with the nearest markets and urban areas, and boost the economy and social development of the people.

He implored beneficiaries to cultivate good maintenance culture of the roads.

He said: “Provision of good road network is central to the agenda of our administration as it breathes life into commerce, agriculture, economy, youth empower, security and the overall well-being of the state and the people.

”We are, therefore, happy to be here to make good one of the major electoral promises which is provision of good road network.

”Three hundred and eight (380km) rural roads are currently being fixed across the state, which is the second phase of the project implementation.

”Osun Rural Access Mobility Project (RAMP) is involved mainly in construction and rehabilitation of earth roads. It gives consideration to road maintenance in order to make these roads to last longer. This is component two of the project.

”Under the arrangement, rehabilitated or constructed earth roads in use for more than 12 calendar months are mechanically restored to their good transport condition. Routine maintenance is also carried out by road maintenance groups all year round,” he said.

The Project Coordinator, Osun Rural Access and Mobility Project, Adesola Adewumi, applauded the administration of Governor Oyetola for building infrastructure to secure a better future for the state.

He said, the agency has constructed several kilometers of roads to support the socioeconomic and political lives of the people of the state, particularly the rural dwellers.

At the backdrop of his development projects, Oyetola has declared that local government Councils in his state operate freely without interference.

He said it will be unfair for any governor not to allow elected chairmen at the local council level to decide what they want in terms of human, capital and infrastructure development.

Oyetola said this, while he hosted the delegation of the Local Government Project Monitoring Team from the Office of the Secretary to the Governor of the Federation (SGF) at the Government House in Osogbo.

He described the local government council as a critical arm of government that should work to deliver development to the people.

”I believe in the functionality of local government administration. That is why we have given all the local governments and the Local Council Development Areas (LCDAs) the independence to operate,” he said.

Meanwhile, the Buhari Support Organization (BSO), in the southwest, has pledged to work with the Osun State governor, Gboyega Oyetola, to give dividends of democracy to the residents of the state.

At a press briefing in Osogbo, the Osun State capital, the coordinator of the group in the southwest, Prince Felix Awofisayo, said the Supreme Court verdict, which affirmed Oyetola as winner of the September 22, 2018 governorship election, is also an endorsement of the expression of wishes of the Osun voters during the exercise.

Describing the governor’s victory at the apex court as a testimonial of the doggedness and tenacity of the people of the state to pursue the progressive agenda, the group acknowleged that Osun is on the path of development.

Congratulating Oyetola for the victory, he said the governor can now “leave behind him all distractions” and “use his God-given administrative talent and managerial sagacity” to improve the lives of Osun residents.