A US judge has jailed 86-year-old former boss of Brazilian football for four years, branding him a “cancer” on the world’s most popular sport in the sweeping FIFA corruption scandal. Jose Maria Marin was found guilty on December 22 in connection with nearly $6.6 million in bribes from sports marketing companies in exchange for contracts…”
Yusuf
Sports 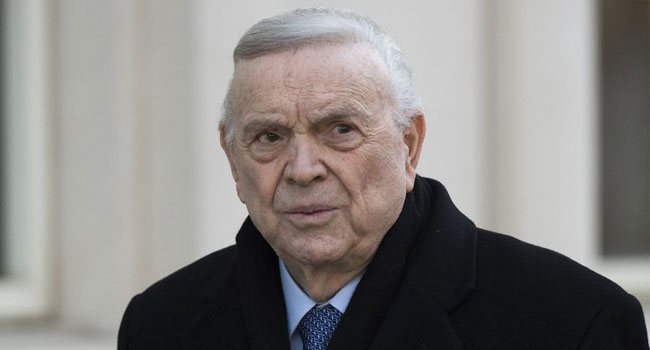 A US judge has jailed 86-year-old former boss of Brazilian football for four years, branding him a “cancer” on the world’s most popular sport in the sweeping FIFA corruption scandal.

Jose Maria Marin was found guilty on December 22 in connection with nearly $6.6 million in bribes from sports marketing companies in exchange for contracts to broadcast major tournaments like the Copa America and the Copa Libertadores.

He was one of seven FIFA officials arrested at a luxury hotel in Zurich on May 27, 2015, and the first defendant sentenced after being convicted at trial in the United States in connection with the scandal that disgraced world football.

“Mr Marin says he loves the sport, yet he and his co-conspirators were very cancer on the sport he claims to love,” Judge Pamela Chen said during the sentencing hearing in federal court in Brooklyn.

“His crime was one of pure and unmitigated and unchecked greed,” she added.

“He abused the trust of the soccer organizations that he was bound to serve. He took millions of dollars in bribes that he didn’t need,” added Chen, condemning Marin for failing to recognize what he did was wrong.

In addition to sentencing him to four years behind bars, Chen ordered Marin to pay a fine of $1.2 million and return the nearly $3.4 million in bribes that he personally pocketed as part of his years of criminal dealings.

The former president of the Brazilian football federation, dressed in beige prison scrubs instead of the elegant suit he wore during his seven-week trial, cried and appeared agitated.

Marin — his hair longer and his posture more stooped after eight months in custody — did not ask to be forgiven or offer any sign of remorse. He said only that he regretted if his actions had caused harm to anyone.

He broke down in tears when talking about his wife of nearly 60 years who was present in the gallery.

“My wife and family’s inheritance,” he sobbed. “Do not take away their means to survive.”

He said football had been his great love, but that after his 2015 arrest, it turned into “a nightmare” and his family had been living in “hell.”

Last December, Marin was convicted on six counts of racketeering, money laundering, and bank fraud, and has been awaiting his sentence ever since from behind bars.

US prosecutors had asked Chen to impose a sentence of 10 years in prison and a $6.6 million fine. Citing his age and frail health, his defense attorneys sought a sentence of just 13 months.

US prosecutors have lifted the lid on a quarter of a century of endemic corruption in the heart of FIFA, football’s governing body, and on the largest graft scandal in the world’s most popular sport.

In total, 42 officials and marketing executives, as well as the sports company Traffic, were indicted with corruption crimes totalling more than $200 million.

Marin spent five months in a prison in Switzerland before being extradited to the United States.

He posted bail of $15 million and spent two years living in luxury at Trump Tower, the Fifth Avenue skyscraper best known for housing the penthouse and company headquarters of the US president.

His 2017 trial exposed not only the corruption but the life of privilege, luxury, and excess enjoyed by members of FIFA’s executive committee.

Prosecutors detailed a high-flying lifestyle for the sport’s bigwigs: personal chauffeurs, private jets, luxury hotels, meetings in idyllic resorts in the Bahamas or Mauritius, and cruises on the Danube for families.

Defense attorneys sought to depict Marin as an innocent, unsuspecting elderly man that Brazil’s football federation tapped out of the blue to fill the vacancy left by the sudden resignation of the powerful Ricardo Texeira.

Of the other individuals originally indicted, three have since died and 22 have pleaded guilty. Another 14 remain in their own countries, where they have been tried by local courts, is fighting extradition or are still free.

The US investigation also precipitated the downfall of longtime FIFA president Sepp Blatter and his former heir apparent, Michel Platini.

Ronaldo to Return to MAN U