Flooding: Its Time Buhari Takes A Cue From Trump

By Oluwaseun Bisuga  Many things have been said of President Donald Trump of the US and most of them are rightly so but when it comes to the flooding in Houston and Texas, loquacious Trump deserves some credit. Even if he is doing it for the camera, he has scored some points in my books. First…”
Editor
Op-Ed 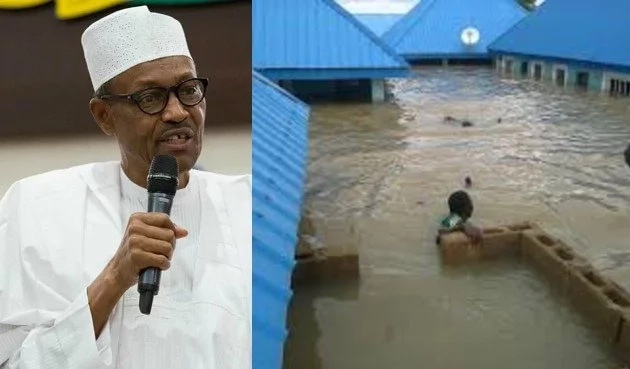 Many things have been said of President Donald Trump of the US and most of them are rightly so but when it comes to the flooding in Houston and Texas, loquacious Trump deserves some credit.

Even if he is doing it for the camera, he has scored some points in my books.

First he visited Texas and victims of the flood then he seconded Vice President Mike Pence to oversee recovery following the havoc wrecked by Hurricane Harvey.

Hours ago, he donated $1million of his own funds to help victims who are in dire need of clothes, food and shelter. And he is demanding that the Congress approves $5.9billion emergency flood funds.

Now that’s a president who understands that every American life matters.

Even by Trump’s standard that is an enviable achievement. If you ask me, I never thought I would have to ask anyone to take a cue from Trump until this happened.

For Americans, what he has done might not be a big deal but for Nigerians it should be because Benue State is being ravaged by flood and the President does not seem to be tackling it proactively.

For starters, I would understand if President Buhari cannot travel to Makurdi in Benue State like Trump did for two reasons.

First, because of his health. He only just returned from London after a medical vacation and might still be recovering and secondly because he is a Muslim. He is expected to celebrate Eid with his family and friends.

At this point, Makurdi flooding should be the most important topic on the minds of Nigerian leaders.

We all are sitting pretty in our very dry apartments and relishing the thought of eating and drinking this Sallah while fellow citizens are gasping for breath in Makurdi.

We are sleeping pretty in our duvets and watching the television while there are some citizens do not have electronic appliances anymore due to flood.

They also do not have homes, clothes, food and many more. They’ve lost all what took them many years to build while the people they voted for are killing rams and cows while watching them suffer on television.

This is simply unacceptable. Like Trump, Buhari should immediately demand emergency flood funds and get to work.

Issuing a statement that the President has directed “National Emergency Management Agency (NEMA) to immediately mobilize personnel and resources to come to the aid of the victims of the flooding” shows that the President does not place a premium on Nigerian lives like he should.

The visuals from Makurdi should send some chill down the spine of anyone who have got any human feelings.

If the President wants to earn the respect of Nigerians, he should call on some senior members of his team and order them to report to Makurdi.

Everything doesn’t have to be politicized. In Houston and Texas, we saw how US lawmakers reacted but in Nigeria they are no-show except for a handful that has mentioned it.

The message is that we trivialize Nigerian lives and this has to stop if we want to earn the respect of the outside world.

I think the President should immediately get to work now.

Let’s take a second and think about this. That could have been you trying to navigate through the flood and watching your world nosedive before your eyes.

It could be your family members, business or property in that flood right.

I hope this government gets to work and save Nigerians in that flood.

LAW & U: Concept Of Bail