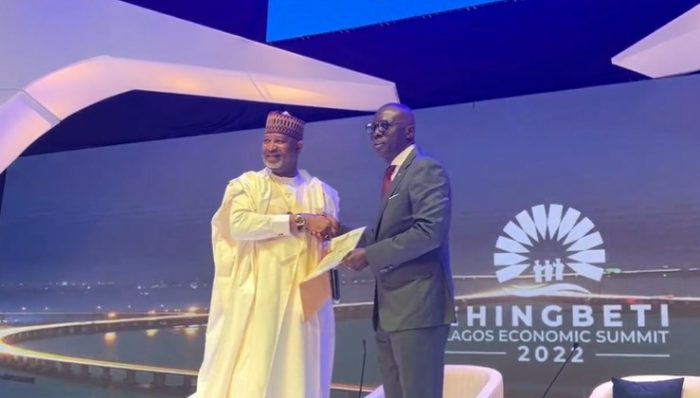 The theme of the summit is ‘Lagos State 2022-2052: Charting the Paths to Sustainable Socio-Economic Growth’.

Sirika had commended the decision and vision of the Lagos State Government to build another airport.

He said the quickest way to connect Lagos to the rest of the world was by infrastructure and civil aviation.

The Lekki International Airport is expected to be both passenger and cargo airport.

The Lekki-Epe International Airport is an airport development project east of Lagos, Nigeria.

The master plan has been completed and a 3500 hectare site for the airport has been secured.

The airport is designed to handle five million passengers p/a with scope for future expansion.

Sirika noted that Lagos has the resources and exigencies for an additional airport ‘which will help to decongest the Murtala International Airport’.

According to him, “This is our Lagos, and having this additional airport will make Lagos more accessible. It will link the people and state closer to the markets, culture, history, tradition, schools, hospitals, larger economy, commerce and trade. The GDP of Lagos, now running into trillion, makes about 30 per cent of the country’s total GDP, thus making it not only the hub of West Africa, but of Africa as a whole.

“You will also agree with me that the Murtala Muhammed International Airport is now congested and far from the centre of action at the moment because there is a new Lagos – the Eko Atlantic City, Lekki Free Zone, the road networks around Epe – and many other development projects, making Lagos need this airport like yesterday.

“We are therefore more than happy to approve it, and we will get our agencies to supervise it to ensure it is done very well, which is also the signature of Lagos itself.”

Governor Sanwo-Olu, who received the letter with enthusiasm, described it as the result of good partnership with the Federal Government.

According o him, “It is very exciting to have the minister here with us today to do the presentation, and this will be the first in the series of announcements to come between today and tomorrow.

“For us, it is about good partnership with the Federal Government through the Ministry of Aviation, but the real beneficiaries are the citizens and the businesses we are trying to activate the more. We are doing Govt2B and B2B models, and that is how you develop economies like this.

“We want to give businesses the platform and infrastructure needed to thrive. This infrastructure will reduce travel time, make Lagos easily and better accessible, and people can make better local and international business decision given all the investments that have put here. So it’s a right step in the right time.”

2023: Without Buhari On Ballot, We May Not Get All Votes — Osinbajo

Buhari Appeals To ASUU To Call Off Strike