A new chapter in road development in Nigeria is being opened with the announcement that the Federal Government has sealed an agreement with the Dangote Group to reconstruct the Apapa- Oshodi-Oworonshoki expressway and three ancillary routes. It will be gratifying to note even a belated attention to the long-neglected economic routes. Although this is not…”
Yusuf
Op-Ed 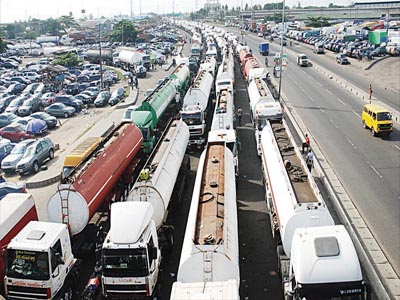 A new chapter in road development in Nigeria is being opened with the announcement that the Federal Government has sealed an agreement with the Dangote Group to reconstruct the Apapa- Oshodi-Oworonshoki expressway and three ancillary routes. It will be gratifying to note even a belated attention to the long-neglected economic routes. Although this is not the first attempt at this model, the pedigree of the concessionaire and the scope of work show positive signs for private sector participation in providing transportation infrastructure in the country.

The routes are: Creek Road to bridge into Tin Can Island, Marine Beach through Ajegunle to Mile 2 on Lagos-Badagry Expressway, Liverpool Road, from Point Road to Marine Road Roundabout, and Tin Can Island-Oshodi-Oworonshoki-Tollgate of Lagos-Ibadan Expressway (leaving out a 7-kilometre stretch “around Mile 2” and the section that Lagos State Government is reconstructing from Oshodi to Toyota interchange and the International Airport Terminal. Each of these routes is a separate engineering project with its peculiar requirements. As for the Apapa-Oshodi Expressway, the Federal Highways Division has the original consultants’ designs used by Julius Berger for the initial construction. For this new reconstruction project, a major aspect is the costing, especially with the use of reinforced concrete for the surfacing.

There is much wisdom in the choice of cement at this juncture. In 1989, the International Road Federation World Highway Conference in Seoul Korea alerted road builders worldwide that the deposits of heavy crude (that yields bitumen as bi-product) were dwindling and cement would have to replace asphalt for road construction.

Nigeria does not produce heavy (bitumen) crude but imports from Venezuela. However, the country has vast deposits of limestone for cement production. The Cement Manufacturers Association of Nigeria has been canvassing the use of cement for roads.

To encourage the Dangote Group and others with similar interest in private sector participation, the government announced extending the existing period of five years rebate to 10 years. Although this is a matter for financial engineering by experts in the related fields, it is not likely that the number of years can be rigidly determined, as it depends on the finances expended on the construction and the annual taxes that may be due from Dangote Group based on its taxable earnings.

It is a public interest assignment even as this project provides exciting days ahead for lawyers (in drawing up the legal framework) and the special purpose consortium of engineers, quantity surveyors, bankers, insurers and auditing firms of repute.

The Federal Government has expressed hope that the construction would be quickly handled because of its determination to solve the problems of congestion in the Apapa and Tin Can Island ports. Can the nation expect a quick result, in this regard, considering the scope of work and the preliminary negotiations? As the major aspect of the projects involves the evacuation route for the nation’s busiest seaports, there must be extensive planning for traffic movement during the construction period. This is where we would like to call on the inter-ministerial agencies concerned and the Lagos State government to be diligent about the peculiarly messy roads to Apapa seaports.

By deciding to enter into negotiations with Dangote Group, the Federal Government has again taken a bold step based on its decades-long recognition that it cannot solely cope with the burden of funding federal roads in the country. It was that realization, which informed the 1997 Road Maintenance Initiative tagged Road Vision 2000 and its Steering Committee charged with the responsibility for setting up a National Road Fund. Although the Abubakar 11-month regime did not promulgate the draft decree into law for the Road Fund, the successive Obasanjo administration excised a part of the recommendations and established the Federal Roads Maintenance Agency (FERMA). That option has not been a significant success, after all.

In February 2008, a stakeholders meeting organized by the Ministry of Transportation and Federal Roads Maintenance Agency recommended setting up the Infrastructure Concession Regulatory Commission (ICRC) to handle the details of concessions segments of the federal road network. In June of the same year, the ministry promptly staged the workshop on Road Sector Reform, (in collaboration with the Bureau of Public Enterprises) and drew up a definite timetable for establishing the Road Fund. However, there has been no executive will to set up the road agency. This has been part of executive procrastination that has taken some steam out of needed attention to many economic routes among others.

The Lagos-Ibadan expressway was the first federal road to be concessioned but many factors contributed to the failure. On the other hand, Lagos State entered into a successful concession for the Lekki Expressway involving capital recovery from toll earnings. The Dangote deal, however, promises to be different. Although the Group has not been so visible in the business of road construction, it has a track record of mobilizing capital to deploy the required expertise for major projects. This justifies optimism in a new era for road development in the country.

As the nation awaits the details of the strategic agreement with Dangote Group, we commend this development as a remarkable dimension in Corporate Social Responsibility (CRS). Beyond the profit motive, enlightened self-interest often reiterates an enduring message that meeting the increasing needs of society is the business of business.

The Courts And Internal Democracy In Nigerian Political Parties, By Muiz Banire

Before The Next Round By Edwin Madunagu

The Asaba Massacre And The Nigerian Question By Charles Ogbu