FG Begs Niger Delta Avengers “Just Be Patient With Us”

Federal Government, yesterday, pleaded with militant groups in the Niger Delta region, especially the Niger Delta Avengers, NDA, to be patient with the government as efforts were being made to address all their grievances. Pastor Usani Uguru Usani the Minister of Niger Delta Affairs, who made the appeal shortly after having a closed-door meeting with…”
Yusuf
News 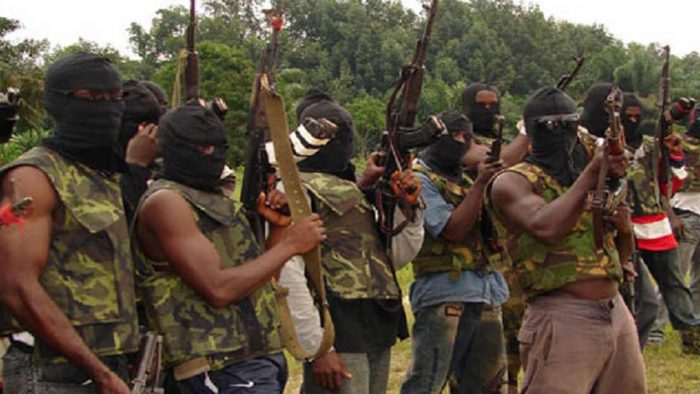 Federal Government, yesterday, pleaded with militant groups in the Niger Delta region, especially the Niger Delta Avengers, NDA, to be patient with the government as efforts were being made to address all their grievances.

Pastor Usani Uguru Usani the Minister of Niger Delta Affairs, who made the appeal shortly after having a closed-door meeting with President Muhammadu Buhari at the Presidential Villa, Abuja, said already some of the requests of the people had been attended to.

The appeal came as the rivalry between militants in the zone got messier as one of the groups offered to take security agents to ex-militant leader, Government Ekpemupolo, alias Tompolo’s hideout with Tompolo saying he has nothing to do with pipeline destruction.

According to Pastor Usani, the issue calls for patience, “knowing that some of these things have a procedure, and everything has a phase of planning and a phase of execution.”

The minister, who said he was at the Villa to brief the President on the activities in his ministry while he was away, said though the issue of threat by NDA was not part of the discussions, government had started implementing the agreement it entered into with the people of the region.

“For a while, he (President) has not been around and there are things he needed to know from me and so I had to brief him on issues pertaining to the ministry, the projects that are going on and other anthropogenic issues that have to do with general matters concerning the Niger Delta region especially, the concerns bordering on who is right or not right to speak for the zone and the issues of the Niger Delta Development Commission, NDDC. All these occupied our discussions with the President today,” he said.

On whether the fresh threats by the Avengers was part of the discussions, he said: “We haven’t discussed the Avengers per se but it is of essence as the President has always shown indication that whatever we need to and can do to sustain peace in the region, we would continue to do it…You are aware that the Vice President (Prof. Yemi Osinbajo) has been chairing the committee that handles the issues they are raising.

“And so, while that goes on operationally, headed by the Vice President, the President just needs to be briefed on our efforts though we know that the Vice President briefs him from time to time but as per the Avengers issue, it was not discussed. On a general note, it is understood that we have to be engaged to be able to sustain the peace that prevailed for a while.”

On his message to the Avengers, he said: “My message is not just verbal but it has been demonstrated by the fact at all times. The government of which I am part, my role as minister in charge of the region, we have been appealing to them to just be patient with us, because, most of the time, the issues that are brought up are those that tend to portray the quest for development of the region.

“And that is all we have been doing, to say, be patient with us, these issues raised genuinely for the benefit of people of the region are being attended to. For instance, the university at Okerekoko, you are aware that the Vice President has directed that that university must take off. And he also directed that a minimum of N5 billion be budgeted for the take-off of the university.’’
On the situation in the region now, he said: “We are glad, so far, that all parties have listened to one another. Government, Avengers, Elders and so on. We would wish that this continues. So, we would advise all of us to remain calm and see the things that we agitated for coming little by little.”

He disagreed with claims of the Avengers that the government has failed in its promises to them, saying the university at Okerenkoko and the communities being part of surveillance of the petroleum infrastructure in the region were promises being kept.

“And of course you know that by the modular refineries which they had also talked about as sub-set of how they can be engaged instead of what is called illegal refineries, are also on, because the process of building a refinery or even getting the necessary procedures to establish such is not just a one day business.

Advertisements have been made, people have indicated interest and of course, to get it sustainable, the government is having the state governments involved but privately driven so that all concerned will be on a common page to ensure that whenever it takes off, there is no frustration or sabotage,’’ he added.

He continued: “Then your second question of meeting with the Avengers, for us as a government, there hasn’t been any group from the region that intended to meet with any arm of government that has been rebuffed. So, if any people make such overtures, we will be happy to receive them. We have been receiving different groups. We are not limiting our dialogue or discussions to any particular group. So anybody that says he is relevant in the process and comes forth, we are ready to engage.”

He however described as unfortunate the circumstances surrounding the reconstruction of the East-West. “For the benefit of hindsight, the East-West road was conceived and started from the Ministry of Works then transferred to the Ministry of Niger Delta Affairs. But we all have to appreciate one thing. Such physical infrastructure don’t decay over night and so the neglect has continually put continuous liability on us.

Yes, it is true that I met with the contractors and I appealed to them to go back to site, we have also been very conscientious in releasing funds as they are cash-backed for them to continue work. Nonetheless, we are thinking of alternatives for completing that project amid the many issues that tend to be the undercurrents that are drawing back the execution. And such issues are technical and we are tackling them. In due course, you will know the outcome,” he said.

Speaking in like manner, Governor Okowa appealed to the NDA not to reopen attacks on oil facilities in the Niger Delta region.

Okowa in a statement issued by his Chief Press Secretary, Mr Charles Aniagwu, noted that “Deltans will lose more if the group make good its latest threat to withdraw from further cooperation with the federal government and begin massive attacks on oil facilities.

“We passionately appeal to the Niger Delta Avengers not to resume hostilities, because Deltans will be the greatest losers. We are barely recovering from the effect of previous attacks and it is our honest appeal that they still give peace a chance by allowing for peaceful engagements with the Federal Government and other stakeholders,’’ he said