The onset of rains brings immeasurable joy to all across divides. However, recent trends bring fear to residents of most communities, owing to widespread devastation caused by water erosion and flood. NIYI OLASINDE bells the cat for all stakeholders to be on red alert, in order to rid our societies of the menace of…”
Yusuf
featured Op-Ed 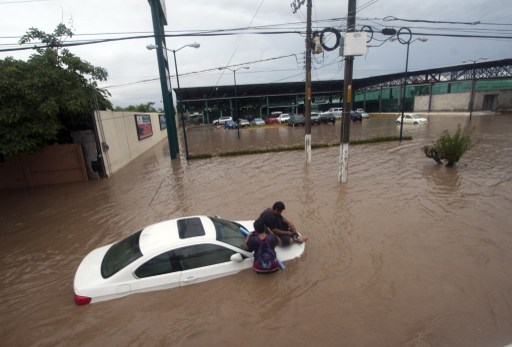 The onset of rains brings immeasurable joy to all across divides. However, recent trends bring fear to residents of most communities, owing to widespread devastation caused by water erosion and flood. NIYI OLASINDE bells the cat for all stakeholders to be on red alert, in order to rid our societies of the menace of constant flooding.

NIGERIA is a country that is richly blessed in every ramification of it. Aside its enormous human resource, the country is endowed with natural and mineral resources, which, if fully explored and exploited to maximum capacity, are capable of taking the nation out of the woods to greater prominence, prosperity and limelight. We are a nation and a people that are grossly underutilized and this fact represents the crux of our bane.

In the area of its location, physical conditions, relief, vegetation and other geographical conditions, we are rich and far richer than many nations of the world that are acknowledged to be frontline movers and shakers in economy, technology, agriculture and all other indices of development. If all efforts are concerted and dedicated, our immense wealth is enough to shoot us up beyond the lacklustre level of mono-product economy. Nigeria is blessed with vast arable land that is suitable for propagating and cultivating large number of crops: both food and cash crops. This vast land requirement puts Nigeria in clear vantage lead in the practice of both subsistence and commercial kinds of agriculture. Nigeria is a mixed grill of ambient and favourable weather, climatic, vegetation and relief conditions. This implies that we have parts of the nation that are amenable to crop farming, while other parts are congenial to animal rearing, husbandry and dairy agriculture. Naturally, these lush natural conditions are suitable for habitation of impressive varieties of flora and fauna.  The weather and relief conditions are crowned with a good measure of annual rainfall. The rainfall patterns divide Nigeria into two major seasons: the Rainy (Wet) season and the Dry (Harmattan) season. These seasons define much of our activities and life patterns; not only within the precincts of farming and agricultural practice; but also in virtually all other aspects of life, living and livelihood. Even in the area of physical infrastructure and other core aspects of our economy.

On top of all the foregoing, Nigeria has, crisscrossing its vast landscape, huge presence of rivers, streams, canals and other bodies of water. Apart from the coastal lines, where the nation bounds with the Atlantic Ocean, into which the drainage network of the entire nation empties in diverse tributaries, rivers of various sizes and volumes keep the vast arable land well watered, moistened and drained such that in and out of rainy season, propagation and cultivation of a large variety of crops are possible all-year-round. Abundant rainfall, available during the Rainy Season, which lasts in most places for an average of eight (8) months, usually March to October, is a buffer for the rivers and drains. The Dry Season too is a blessing, as it checkmates the excesses of downpour that might have been recorded during the Rainy Season.

Water and rainfall are a relief and rich blessings. Described as showers of blessings, they transform the landscape dramatically and bring back life to farmlands and vegetations that have been impoverished and devastated during the almost five-month Dry Season that lasts between October / November and February / March every year.

At the outset of rains every year, farming activities, in the context of tilling and cultivation of land for the propagation of most crops begin for subsistence and commercial purposes. The season arrives with a fresh lease of life to livestock as vegetations regenerate. The planting season causes all to heave a sigh of relief as hopes into another year of bumper and prolific harvests resonates.

HOWEVER, there is a sad turn to this trend in recent times as rains, which have hitherto been a harbinger to a clean bill of health to dwellers across all zones and belts have turned in most cases into messenger of sorrow, tears, blood and death. This trend, partly traceable to the drastic shift in natural components which had been quite clement and friendly in the past, is hugely attributable to man’s actions and inactions. While climate changes, attributed mostly to global warming has dealt palpable blow on other components of nature, man has proven to be the major factor that predisposes conditions that constitute grave besetting to the benefits that should be brought to life by the various forces of nature.

We put under record the fact that man mostly acts as agents of deforestation. Man depletes the forest through deforestation without conscious efforts at replenishing the felled trees. Animals are hunted for meat and are killed indiscriminately. Most of the dangers to which the environment is exposed today are a result of the handiwork of man. Man, through his various activities, scraps off the top soil. The aggregate of all this constitutes disservice, which exposes the environment to water and wind erosion.

Indiscriminate waste disposal and building of structures on river courses and erosion paths are other misdeeds which put the entire society in danger of unimaginable proportions. As it is, the landscape, the rivers and bodies of water remain constant. What has changed a lot are our attitudes and the way we operate and deal with the various forces of nature. We hear pundits speak of depletion of ozone layers through indiscriminate burning and combustion as well as smoke emission from both industrial and non-industrial sources. It is also on record how waters at the coastal lines have beaten the shores beyond the continental shelves. This situation has of recent put coastal communities in trouble; exposing their residents to grave dangers of unimaginable proportions.

As rains begin in earnest, we expect residents and governments at all tiers to be responsive to cautions, especially those that had been sounded earlier in the year by the Nigerian Meteorological Agency (NiMet). In its predictions, the dates set for the inset of rains at the coastal / Rain Forest Belt of the nation are February 24 and June 22. The two dates are past and rains have commenced in earnest. The remaining parts of their predictions are with us for caution and disaster prevention measures. The earliest cessation dates for rainfall are September for Katsina and adjoining areas and December for Niger Delta region. With these predictions, we affirm that we still expect mighty downpour this year. With the rain time-length for Lagos predicted at 297 days for 2020; and the fact that 147 out of the 774 local government areas in Nigeria were devastated by flood in 2019, caution should not be restricted only to flood-prone areas but all residents across states should gird their loins in taking to precautionary measures as appropriate.

IN the State of Osun, South-West Geopolitical Zone of the nation, efforts have been on for close to a decade to completely recede the horrible impacts of incessant water erosion and perennial flood from our communities. The administration of Ogbeni Rauf Aregbesola did eloquently well in reversing the sad trend met on ground through broad-based channelisation and dredging of river courses. The years preceding Aregbesola’s ascension up till 2010 were horrible for the State of Osun. Aregbesola’s effort fruitioned well from 2011 till the time he left office in 2018.

Central to Aregbesola’s infrastructural investment programmes are construction and remodeling of roads, construction of well-pronounced water drains, urban renewal programme, proper and appropriate waste disposal, channelization of river courses and canals, clean and green programme, tree planting and afforestation programme and safe defecation initiatives, among others. Aregbesola’s investment in safe environment paid off well till date, as the menace of flood, water erosion and their attendant woes such as loss of life and property, loss of expanse of  farmlands and displacement of a large number of residents have become a thing of the past in the state.

The administration of Mr. Adegboyega Oyetola is well on course, keeping alive the legacy left behind by his predecessor in office. Oyetola has also started towing the impressive footprints of excellence imprinted by his predecessor through provision of massive roads infrastructure, rivers and canals channelization and building awareness /consciousness of the masses to the essence of having in place a safe and disaster-free environment. As a matter of fact, next to security is having safe and harmless environment.

If the predictions of Nigeria Meteorological Agency (NiMet) cited above are anything to go by, the clarion call goes to all stakeholders, not only in the coastal areas or in the trouble flashpoints to close ranks and ensure safe, habitable environments, the onus rests on all of us to keep our environments properly drained through meticulous and scrupulous disposal of wastes, avoiding indiscriminate erection of structures and blockage of river courses and water channels and giving water erosion its copious right of way.

The best approach to tackle disasters is prevention. Aside the preventive measures prescribed above, it is instructive that house owners, farmland owners and other property owners should embark on insurance policies, as the government and other emergency agencies are only out to mitigate the effects of disasters through the distribution of relief materials and settlement of disaster victims in Internally Displaced Persons (IDP) camps.

It is also urged that all hands should be on deck to cooperate with the National Emergency Management Agency (NEMA) and the various state emergency management agencies (SEMAs) to prevent these preventable disasters; while organizations, corporate bodies and public-spirited individuals should also donate generously towards the worthy cause of being their brothers’ keepers.